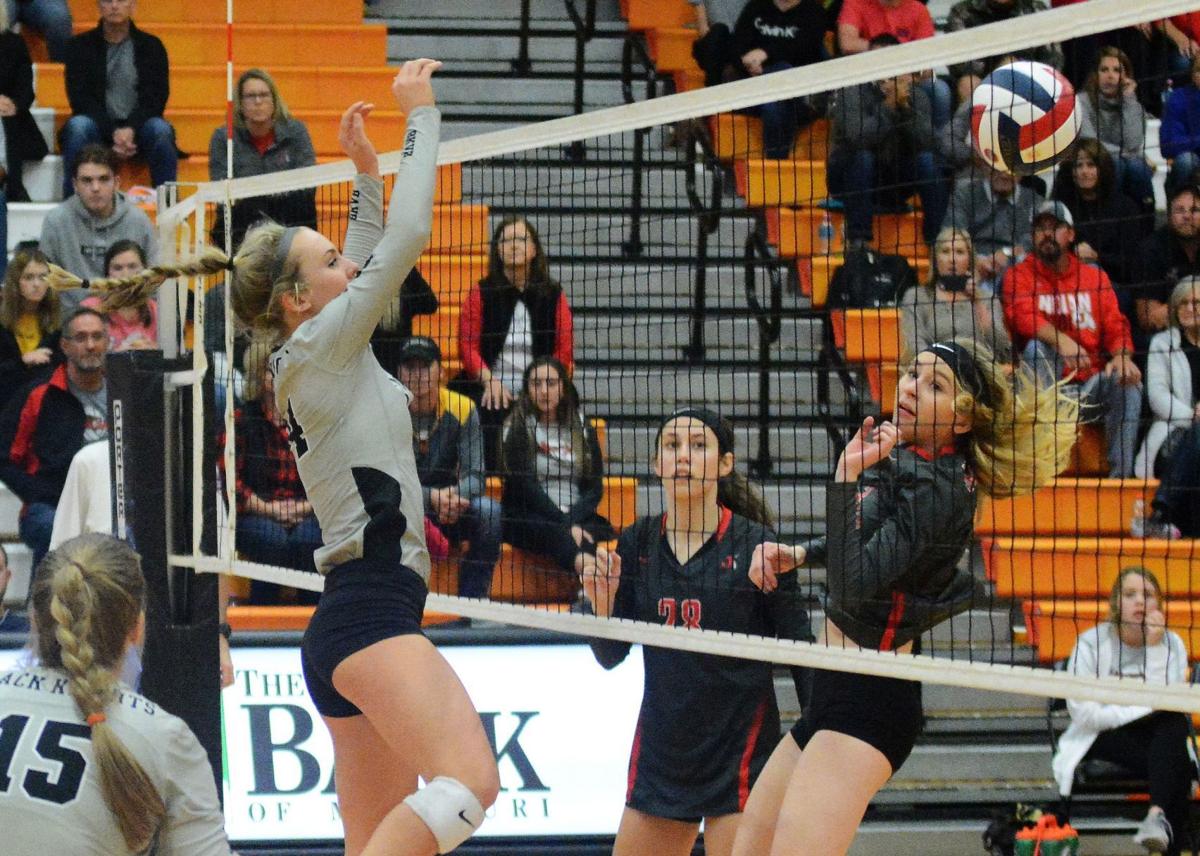 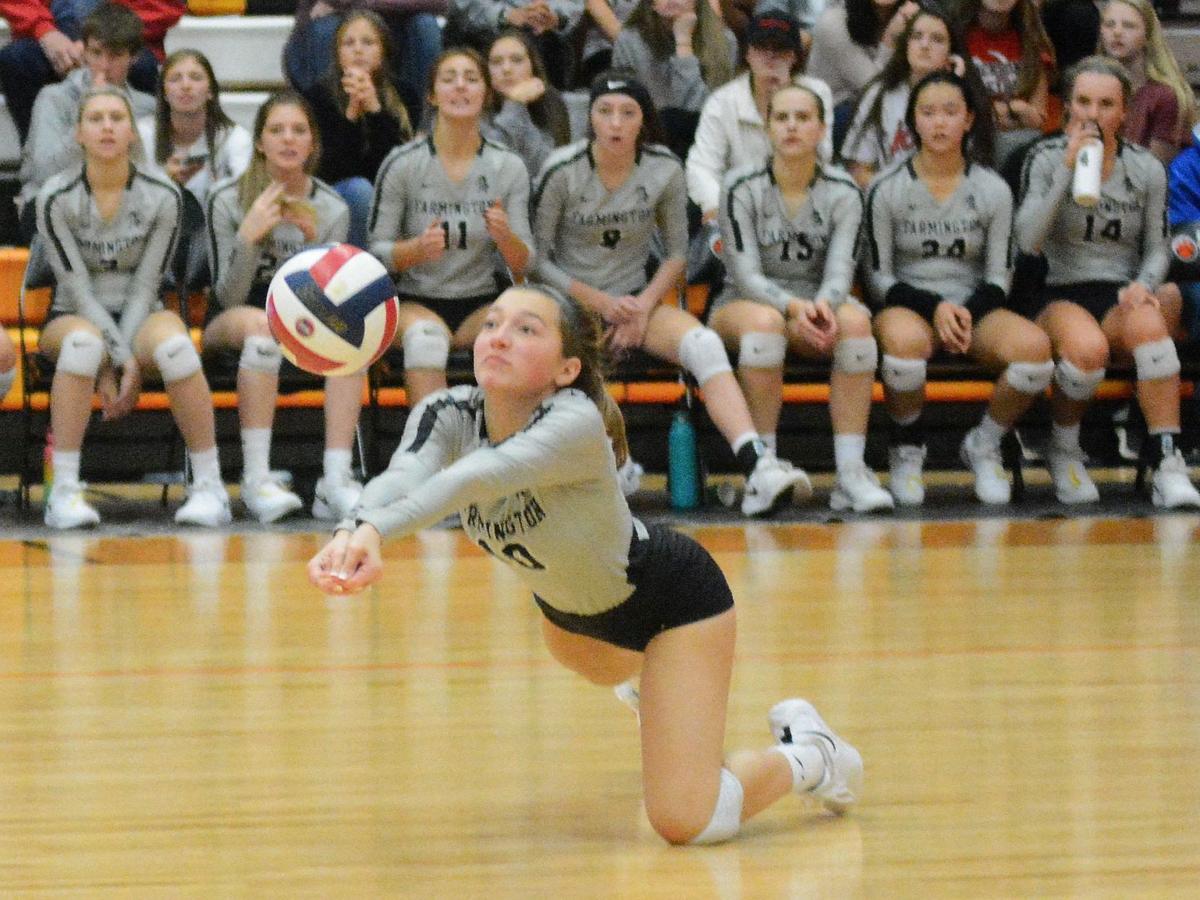 Farmington junior Sophie Pullen (10) stretches for a dig during the third set against Jackson in the Class 4, District 1 championship match on Wednesday night in Cape Girardeau, Mo. 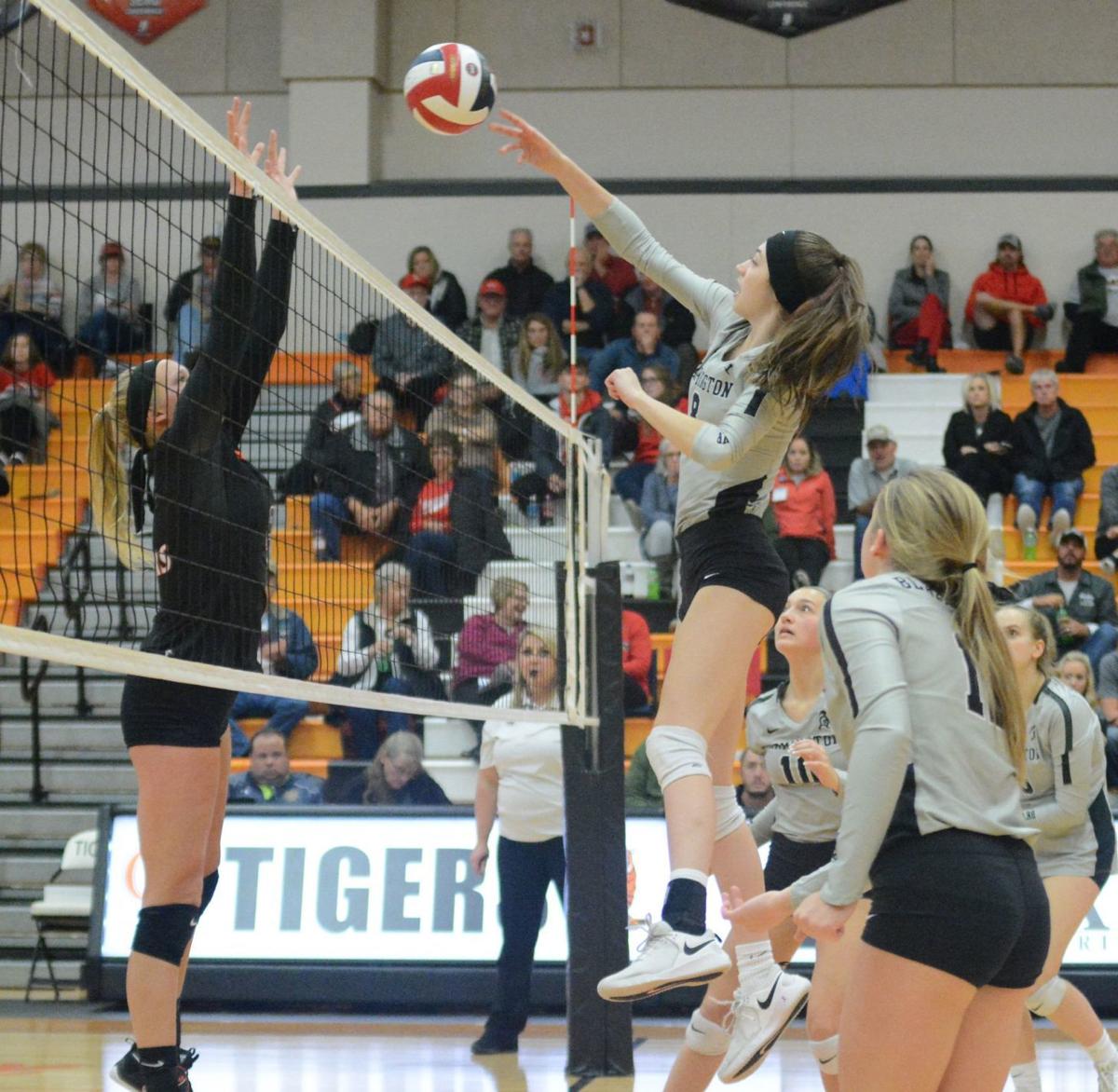 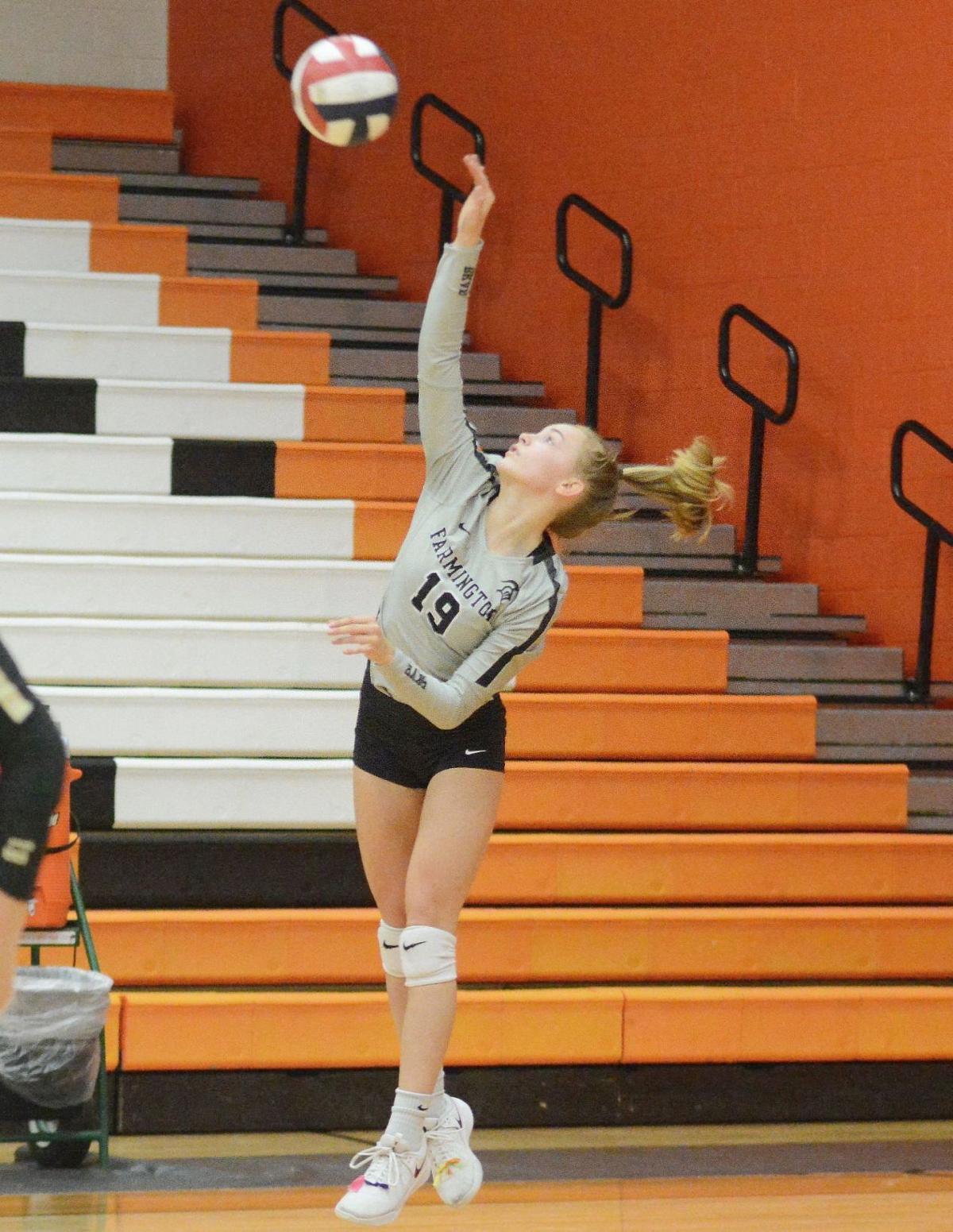 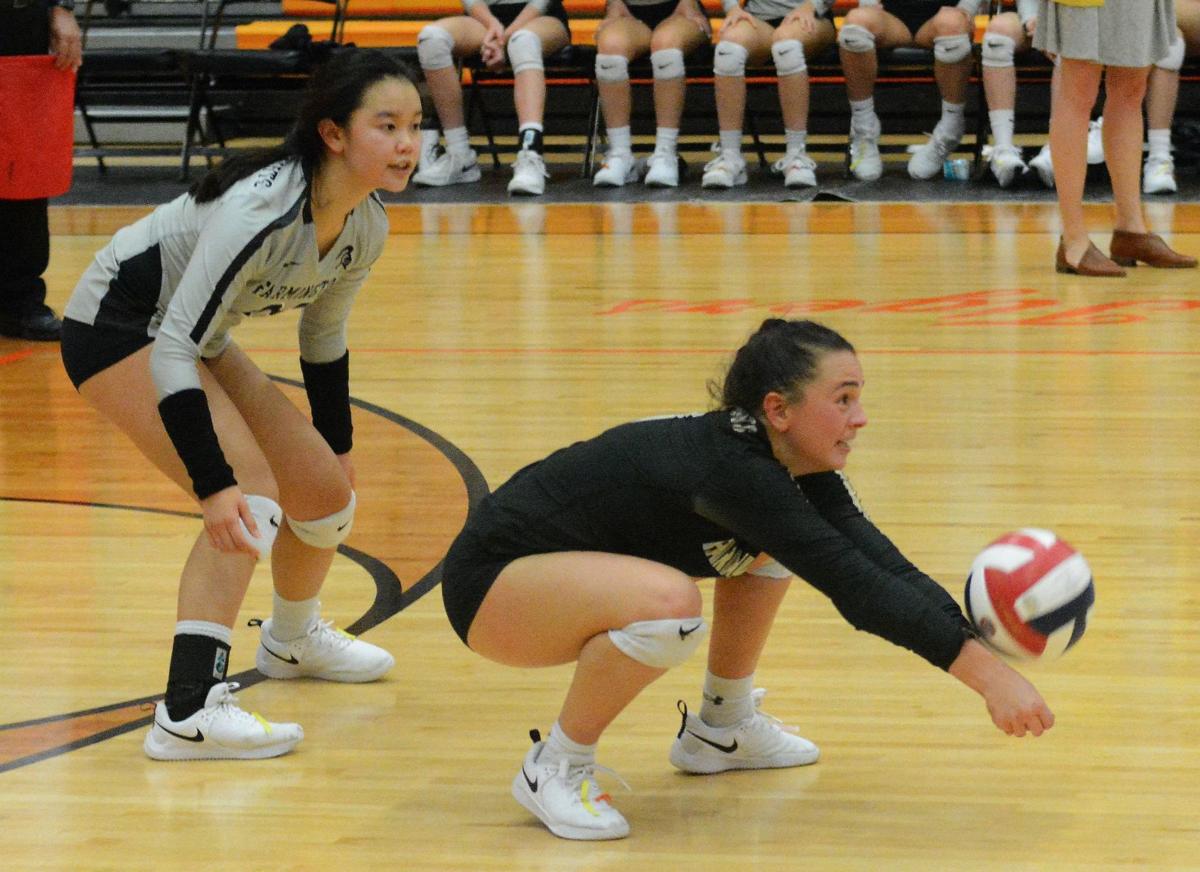 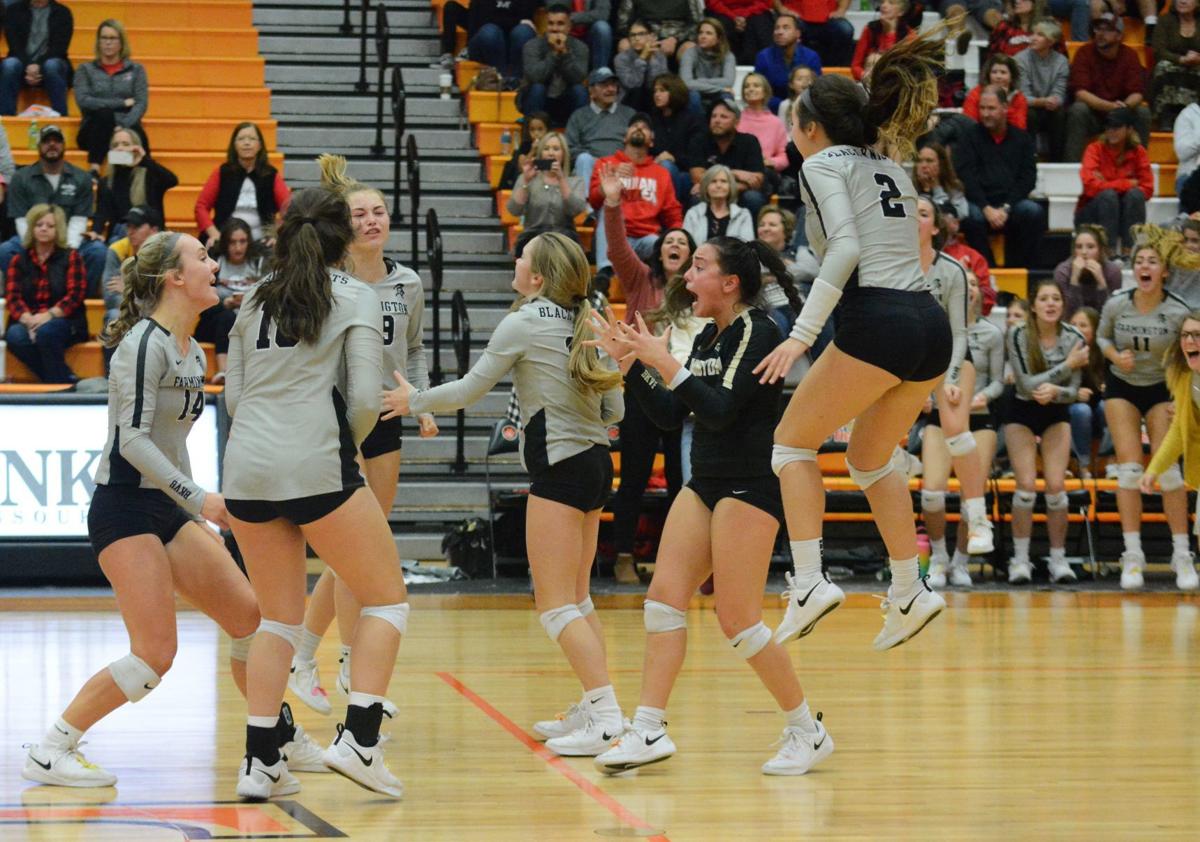 Farmington players react after winning the second set against Jackson during the Class 4, District 1 championship match on Wednesday night in Cape Girardeau, Mo. 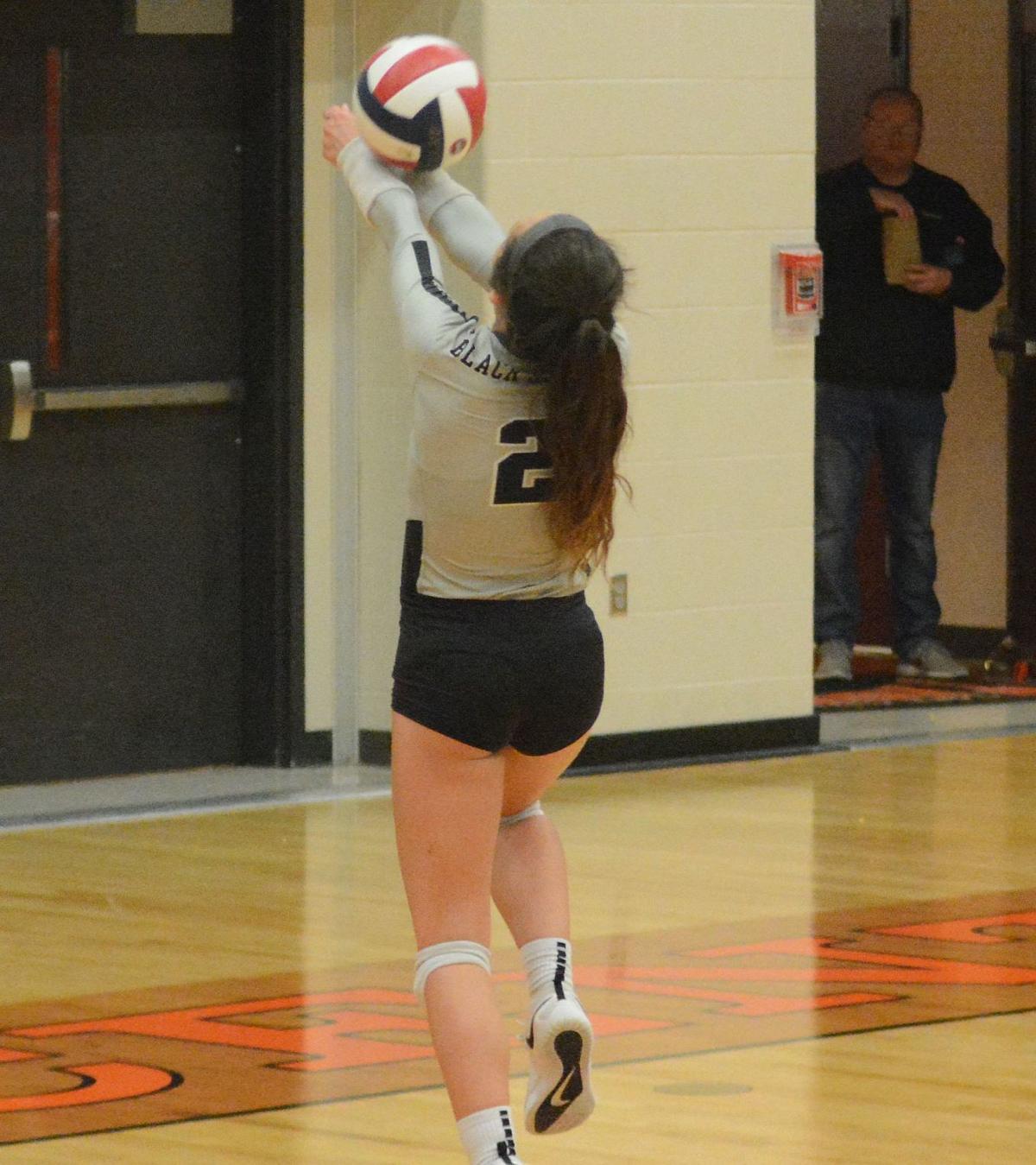 Farmington senior Riley Wade (2) retreats to save an errant pass beyond the service line during a Class 4, District 1 semifinal match against Cape Central on Wednesday night.

CAPE GIRARDEAU, Mo. – The Farmington volleyball team was in a relatively manageable situation against Jackson on Wednesday night, splitting the first two sets despite coughing up sizable leads in both.

But a season littered by inconsistency concluded with a prolonged spiral that could not be curtailed, and the Knights’ hopes of a fourth consecutive Class 4, District 1 title were soon dashed.

Jackson gained confidence with every profitable rally during game three, and snapped its three-year district drought with a 26-24, 23-25, 25-10 triumph at Cape Central High School.

Mackenzie Stoner landed 11 kills, and Hannah Shinn knocked down 10 more for the Indians (28-8-3), who advanced to meet Cor Jesu Academy in the state sectional round at Oakville on Saturday.

Jackson created a healthy 20-7 advantage down the stretch after a service ace from Piper Guilliams clipped the net and bounded over.

Farmington endured a crushing sequence of passes that failed to produce any powerful attacks along the front row at the worst possible time with its season rapidly slipping away.

Alexa DeLuca presented match point with another ace down the middle, and Shinn stamped the outcome with a third kill in her final progression up front.

The Indians, who needed extra points in both games to dispatch semifinal opponent Hillsboro, squandered their chance for a sweep against Farmington after charging back from nine points down.

Jackson grabbed a 17-16 lead in game two, and later scored four straight points with kills from Stoner and Haylee Quatmann providing the spark to move ahead 23-22.

But the Knights (12-17-3) showed resolve to steal the set away, diversifying its attack as three straight kills from Lauren Bishop, Jelena Gray and Emma Gerstner leveled the contest.

Jackson responded with an 8-3 start to the decisive stanza, as two strong swings by Mia Trankler were followed by a line shot from Stoner down the left side.

Farmington either conceded free balls or was inclined to tip gently in attempt to avoid errors over the ensuing moments, and the Indians capitalized with a boisterous 7-0 streak.

Junior libero Katelyn Miller picked up 18 digs for Jackson, which has rattled off nine consecutive victories since being dominated by Ste. Genevieve in a road setback two weeks ago.

Jade Roth recorded a team-high 12 kills for the Knights (12-17-3), including seven in the middle game. She capped a 10-1 start with a smash while senior Jenna Nguyen served seven straight points.

Farmington was forced to reload around three players with significant varsity experience this fall after a bevy of multi-year starting seniors graduated and head coach Julie Ward left for Oak Ridge.

While battling through injuries and pressing freshmen Roth and Gray into major attacking roles from the outset, the Knights (12-17-3) ultimately fell one set shy of another state playoff berth under the guidance of first-year head coach Haley Baker.

Bridget Bone hustled all evening to produce 22 digs, and Wade totaled nine more for a Farmington back row that welcomed Nguyen back from a lengthy injury absence.

Bishop starred in her final varsity contest with 11 kills and five blocks. She sent three swings to the floor – one that followed a diving pass from Bone – as Farmington jumped to a 7-4 edge in game one.

Gray regained the lead at 15-14 on a return feed after digging a deflected spike, and later placed a shot along the net while on the run after Sophie Pullen flawlessly settled a tricky low pass near her hip.

Jackson misfired on three successive attacks and trailed 22-17, but drastically shifted the tide of the title match on the backside of a timeout.

Setter Madelyn Bourner ended an active rally with a clever flick on second contact. Stoner tipped to a wide-open spot to bring the Indians within 23-22.

Roth countered with an accurate tip of her own for Farmington, but sent her next swing long by only a few inches. Jackson erased another set point before Trankler delivered a go-ahead kill and clinching stuff.

Two kills from Alyssa Wilson fueled 3-0 answer to begin game two, as the Knights recovered nicely from that letdown. Pullen finished with 17 assists while Wilson dished out 16.

The Knights trailed 7-5 early in game three, but were spurred by a sudden 8-0 blitz served by senior Riley Wade. Bridget Bone executed a crashing dig that preceded a crucial spike from Gerstner.

Farmington continued to roll from there. Bishop concluded the next rally on a second chance from the middle, and Jelena Gray followed with two successful outside attacks.

Gray emerged from the handshake line with a deep exhale after applying the final swing. Bone ignited that transition after crossing in front of a teammate for a diving stop off an extended fist.

Bishop notched six kills within her first two appearances up front in the opening set, and Roth won a late joust to help Farmington build a 13-6 kill differential.

Cape Central missed four early serves, but lulled the Knights into a lethargic rut through a strategy of tipping and prolonging slower rallies.

Bishop pushed back with a kill and solo block on consecutive points, and Gray scored after Nguyen slung a one-armed save near the stands as Farmington trimmed a previous 10-5 margin to 20-18.

Vogel and Boxdorfer answered with timely kills for the Tigers, and Ogburn claimed the set with a cross-court shot that was touched while appearing to carry wide.

Farmington junior Sophie Pullen (10) stretches for a dig during the third set against Jackson in the Class 4, District 1 championship match on Wednesday night in Cape Girardeau, Mo.

Farmington players react after winning the second set against Jackson during the Class 4, District 1 championship match on Wednesday night in Cape Girardeau, Mo.

Farmington senior Riley Wade (2) retreats to save an errant pass beyond the service line during a Class 4, District 1 semifinal match against Cape Central on Wednesday night.