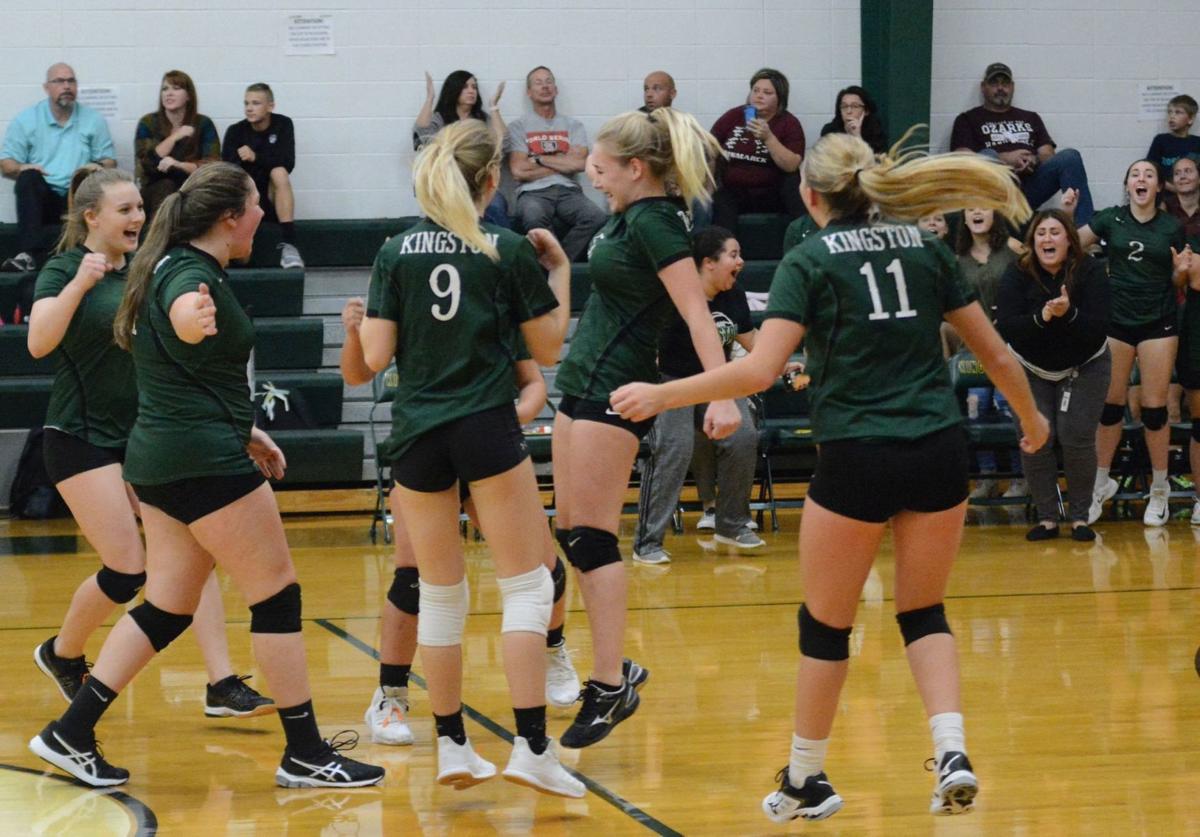 Kingston sophomore Josie Pierce jumps into a crowd of teammates after spiking the final kill in a three-set victory over Bismarck on Tuesday night. The Lady Cougars snapped a 24-match losing streak dating back to last season. 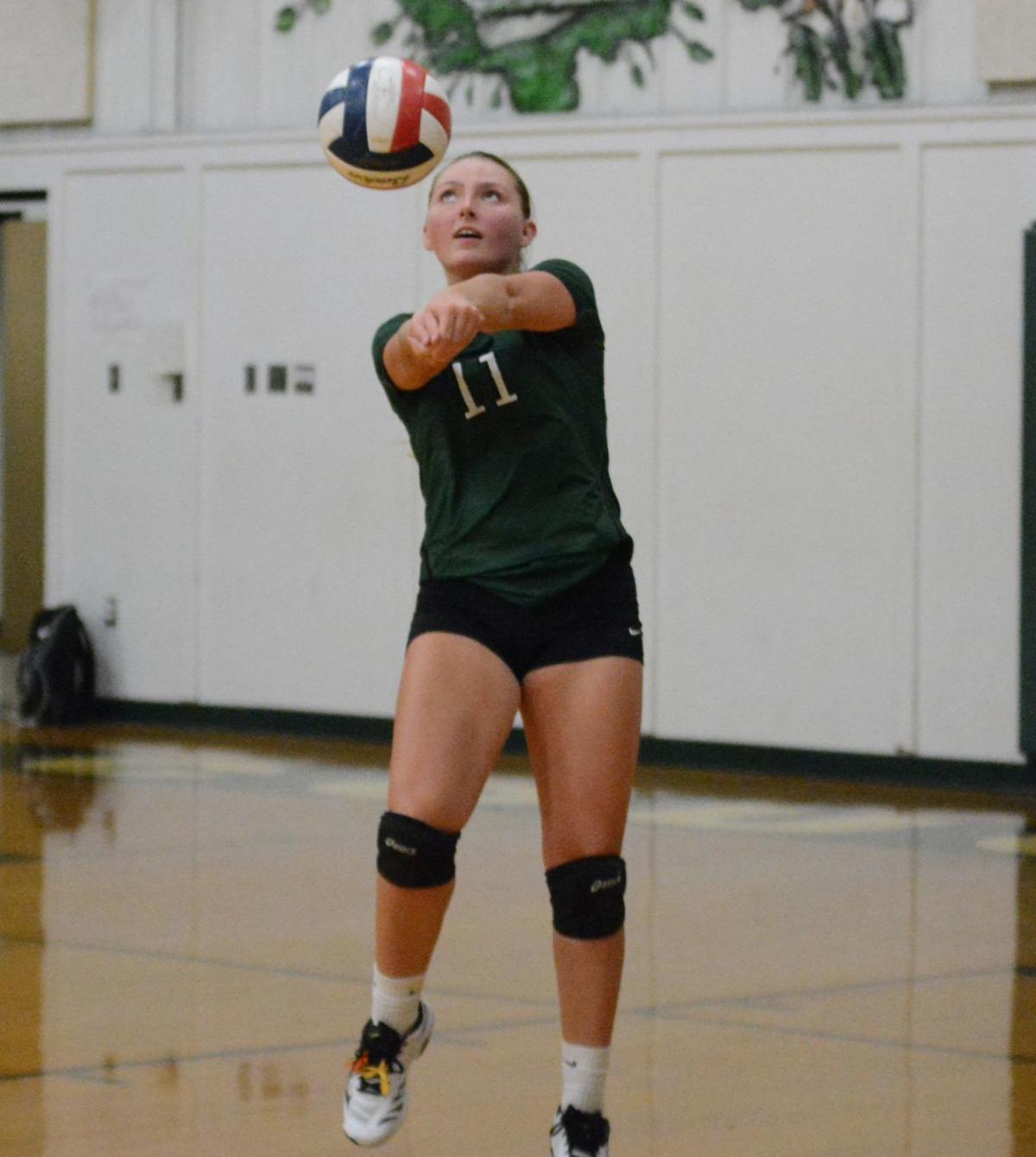 Kingston junior Jerzie Ware (11) guides a pass from the back row during game three action against Bismarck on Tuesday night. 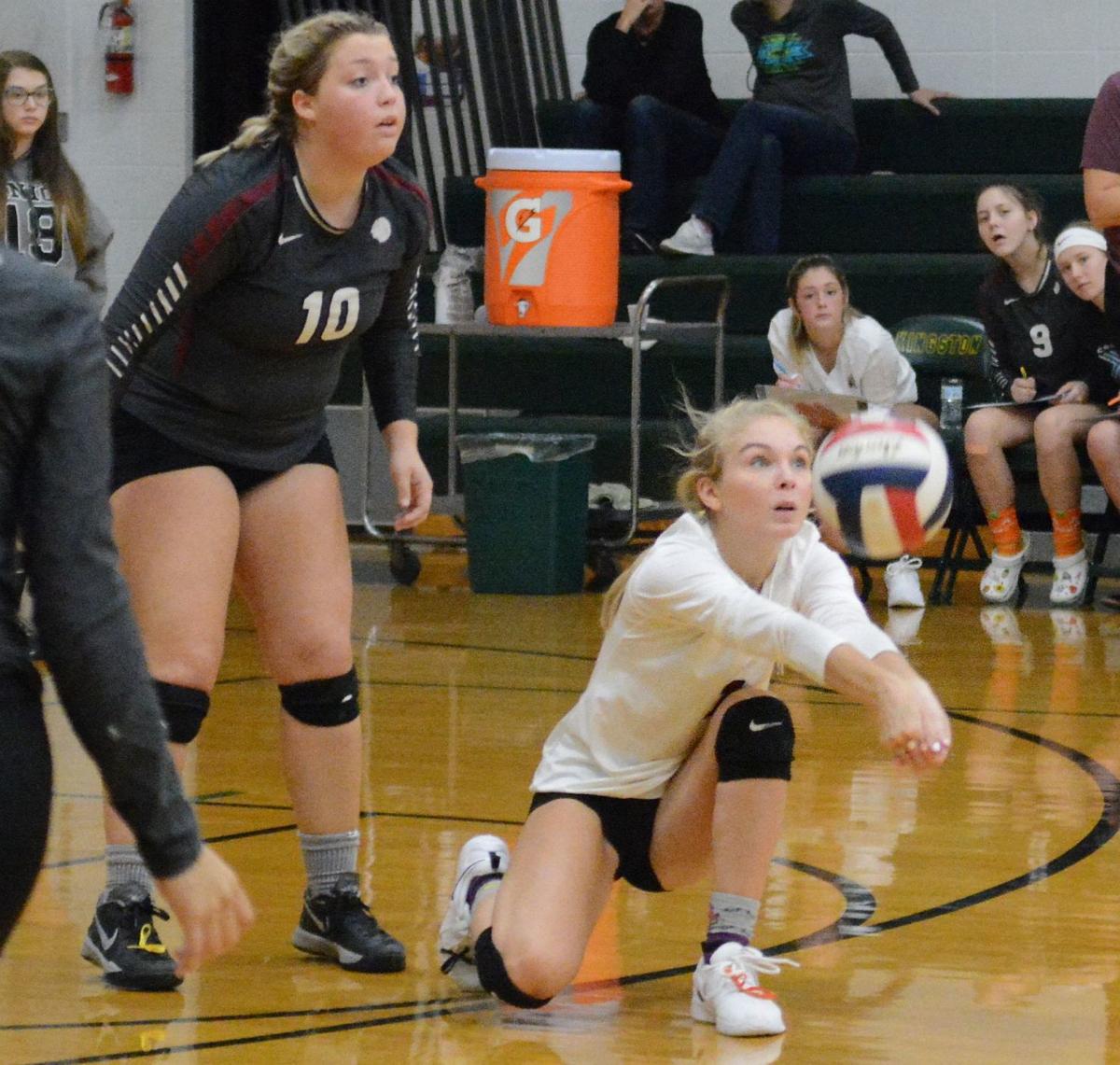 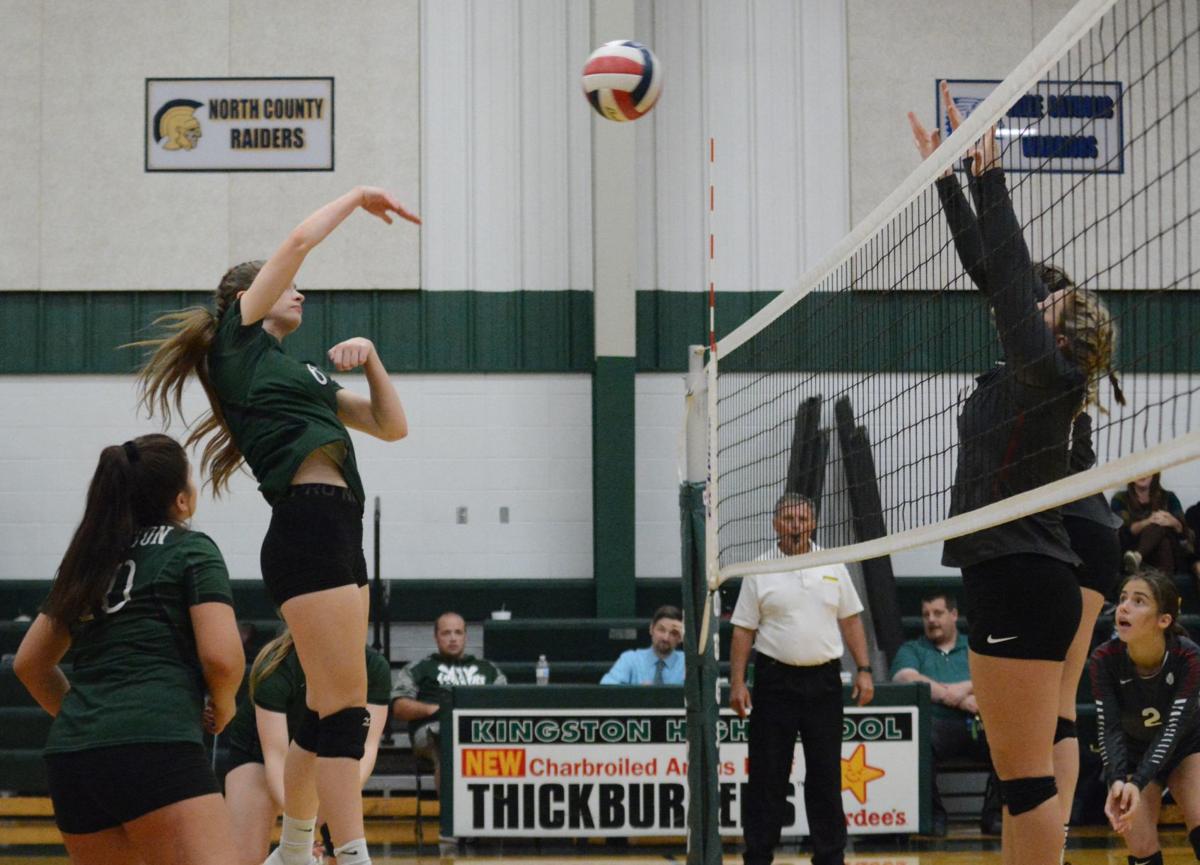 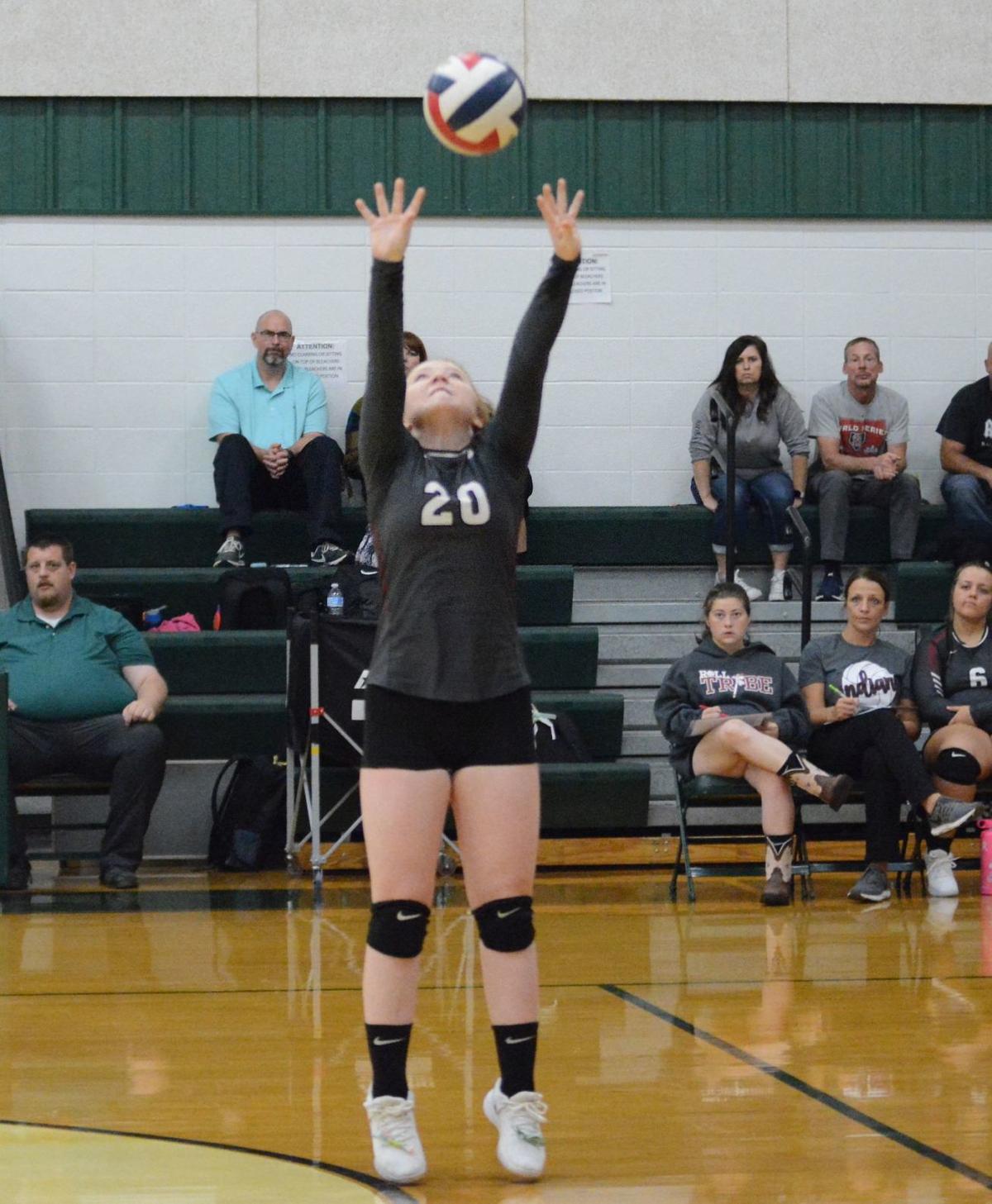 Bismarck sophomore Riley Dickey (20) releases a stationary set during game one against Kingston on Tuesday night.

CADET – Erica Hankins set some time aside on Tuesday for her Kingston volleyball team to verbalize some of its concerns and frustrations stemming from a six-week winless drought.

The Lady Cougars had captured only two sets during their previous 17 matches this season, and were desperately seeking to reverse fortunes against a Bismarck squad facing similar struggles.

“Before our game today, we had a huge team discussion, and just let a bunch of things out that we felt were holding us back,” said Hankins, a first-year head coach and former Mineral Area College volleyball and basketball player.

Although a premium opportunity to win appeared to be quickly slipping away on Senior Night, Kingston delivered the type of spirited response that had proven so elusive.

Sophomore Josie Pierce served a stunning 12-0 scoring run, and the Lady Cougars burst into celebration after overtaking the Lady Indians 25-21, 23-25, 25-22.

Various errors piled up on the Lady Cougars as Bismarck threatened to run away with the decisive game. But for one encouraging and critical stretch, they were practically flawless.

“I kept yelling at them from the sideline to stay aggressive and not be complacent; not just receiving a ball, but really working hard to put it back on their side,” Hankins said.

Payton Cole notched four of her eight kills during the final stanza, and added 12 digs for Bismarck, which established a 20-12 lead when two Kingston players collided on a failed clearing attempt.

A service mistake gave the Lady Cougars a moment to regroup, and Pierce took over with one accurate serve after another. Gann pounced from the middle when a Bismarck pass carried over the net at 20-19, and Reyes reacted for a clearing dig to help earn the tying point.

The Lady Indians could not capitalize on a hustling save by setter Riley Dickey as Kingston won a long rally moments later, and Hailey Hagood combined with Gann to block a tip shot at 24-20.

Bismarck turned aside two match points, creating a measure of added anxiety for the home fans, but Pierce landed a back-row swing to seal the outcome.

“I have a really great group of juniors who do not let anything get in their heads. One that comes to my mind now is Jerzie Ware,” Hankins said. “She does not have a down moment. Even if something doesn’t go her way, she immediately turns around and talks to her teammates about the next play and being successful.”

Kingston used a smaller 6-0 spurt to gain control of game one after it stood even at 16-16. Jade Coleman tapped a kill over the block, and Fogelbach sent an overpass to the floor.

Bismarck grabbed a 13-10 lead in a middle set that featured 12 ties, getting left-side kills from Cole and Campbell along the way.

Kingston pushed back for a 15-14 lead after Alyssa Coleman sent a superb bump pass across the court to Jade Coleman for a scoring attack.

“For a team that is not used to winning and hasn’t traditionally, tonight they came out and showed that by putting together the grit and fighting their way back, that it’s possible,” Hankins said. “Being able to do that is a huge morale builder.”

Two digs by Droege won a tiebreaking point for the Lady Indians late in the game, and Dickey served an ensuing ace for a 23-21 edge.

McCoy scored for Kingston with a subtle set over the net, but another Bismarck ace secured the game after Cole ended a scramble with a direct kill.

Campbell had five kills with seven digs, and Dickey made 16 assists plus seven digs in defeat. Droege amassed a team-high 15 digs, and Teagan Ryder chipped in four kills.

The Lady Cougars snapped a 24-match losing streak dating back to last season,

Kingston sophomore Josie Pierce jumps into a crowd of teammates after spiking the final kill in a three-set victory over Bismarck on Tuesday night. The Lady Cougars snapped a 24-match losing streak dating back to last season.

Kingston junior Jerzie Ware (11) guides a pass from the back row during game three action against Bismarck on Tuesday night.

Bismarck sophomore Riley Dickey (20) releases a stationary set during game one against Kingston on Tuesday night.