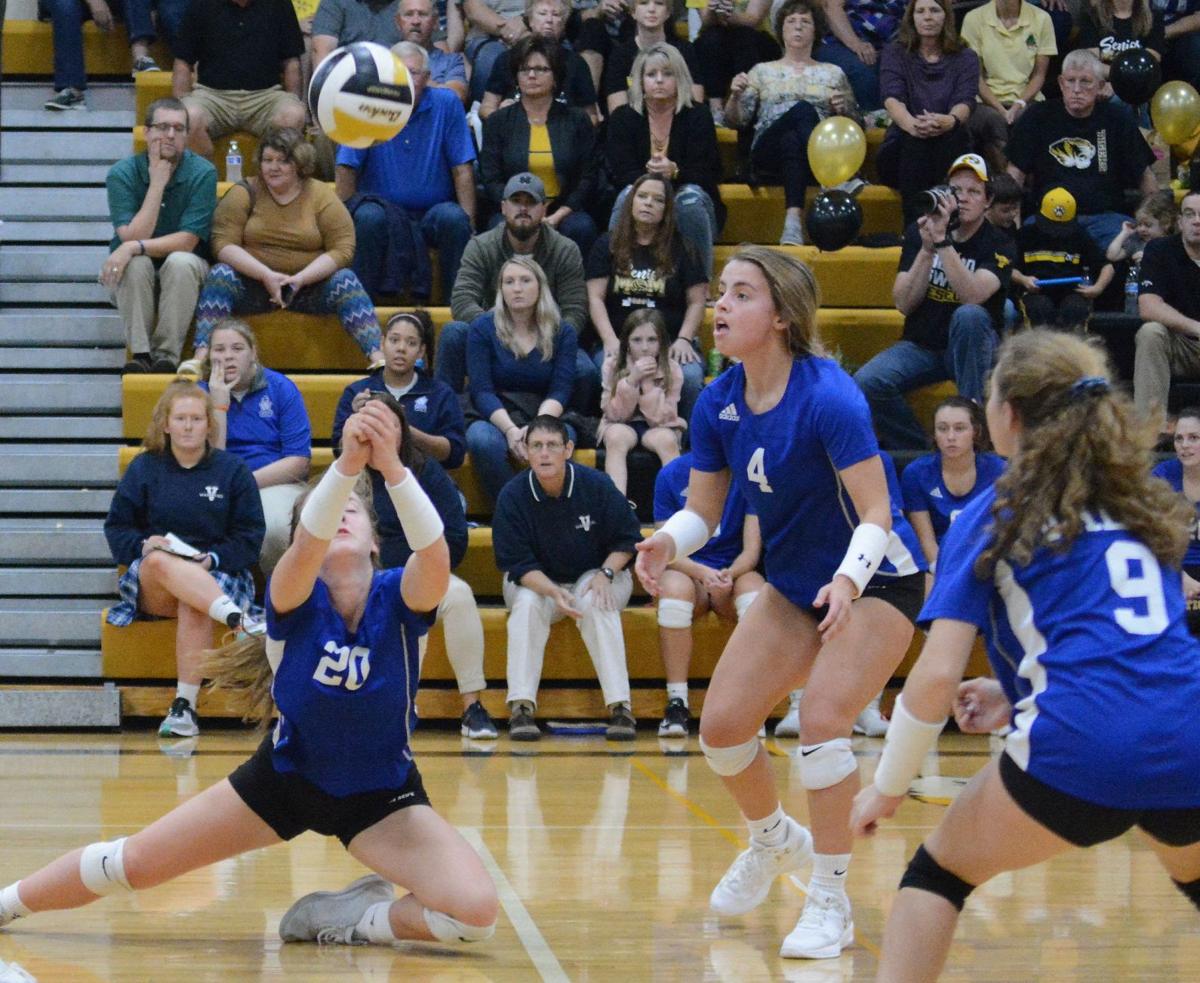 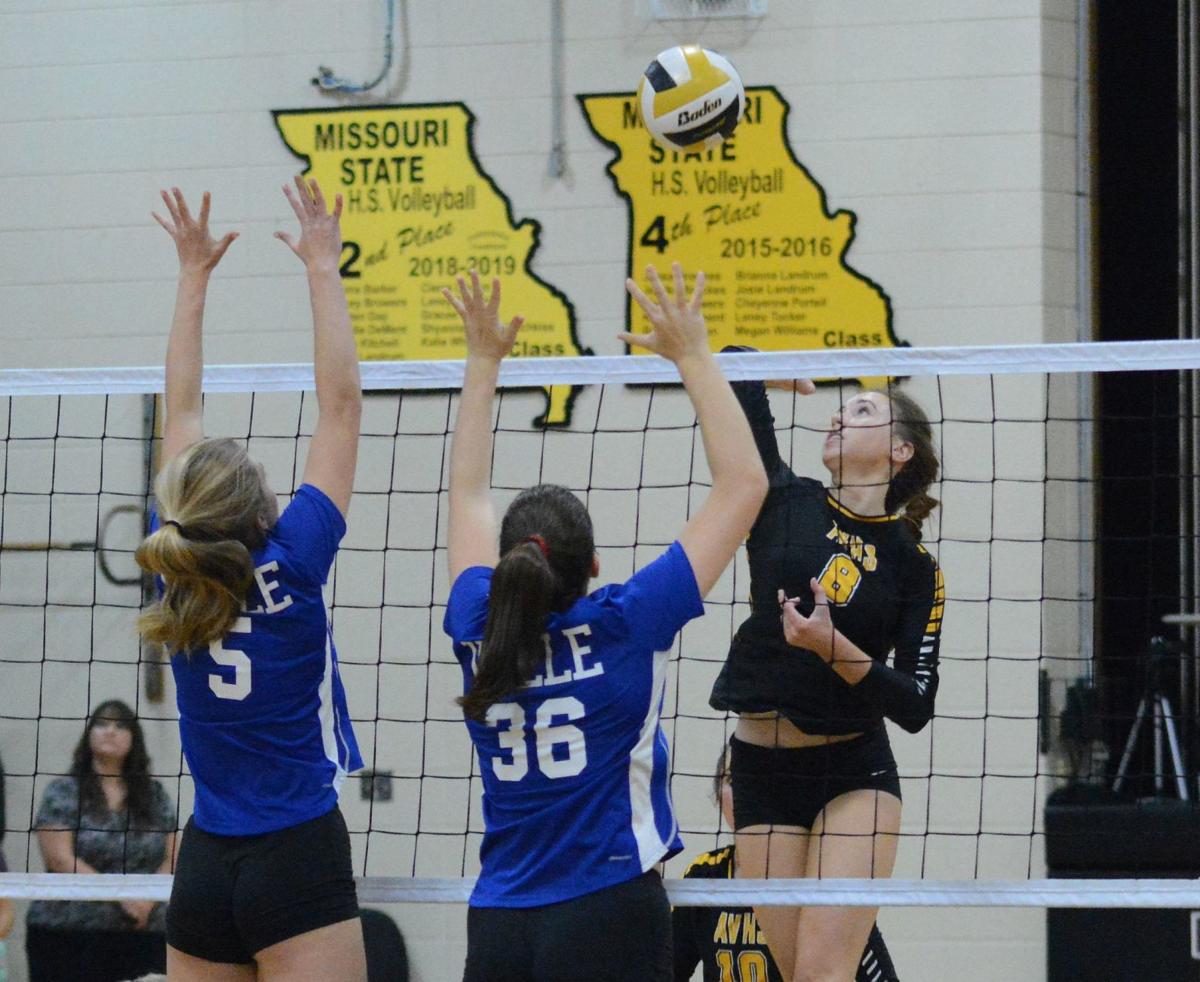 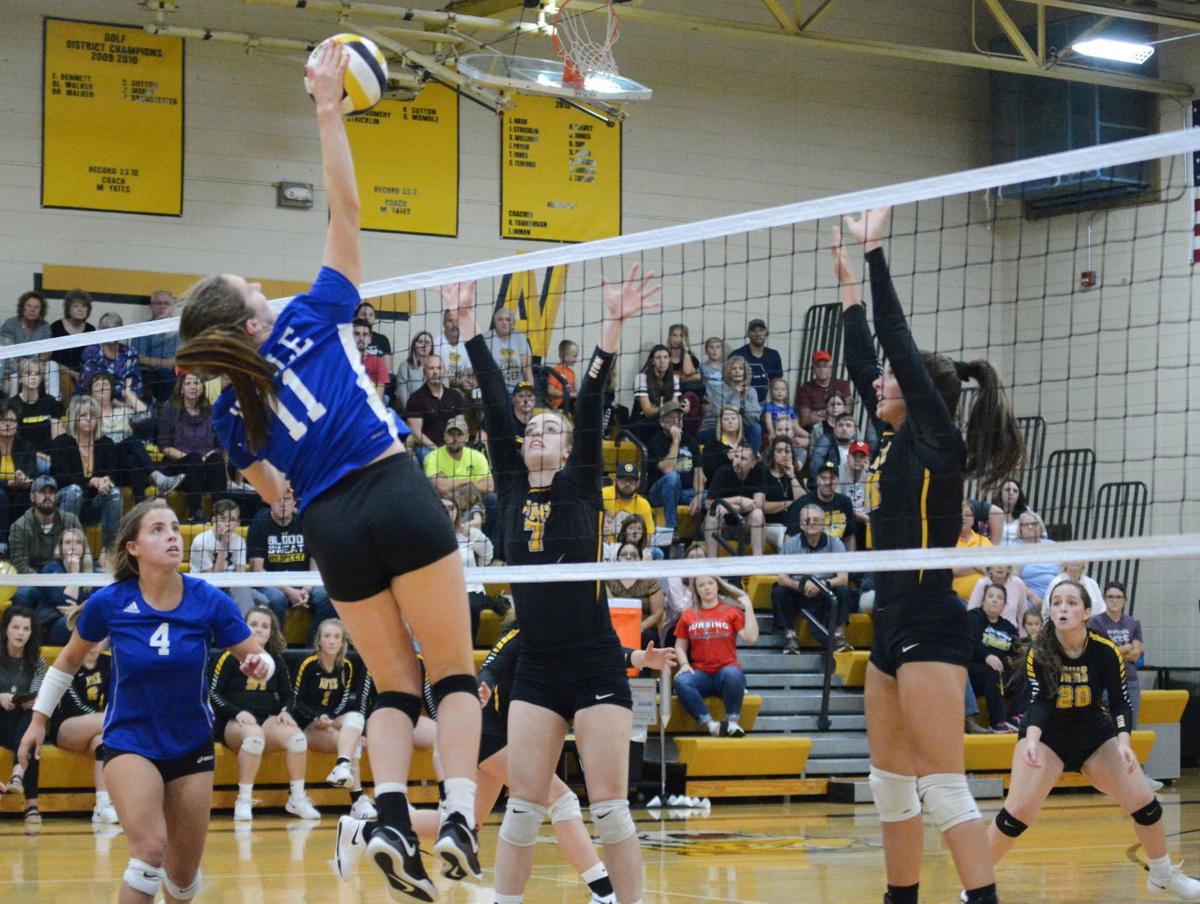 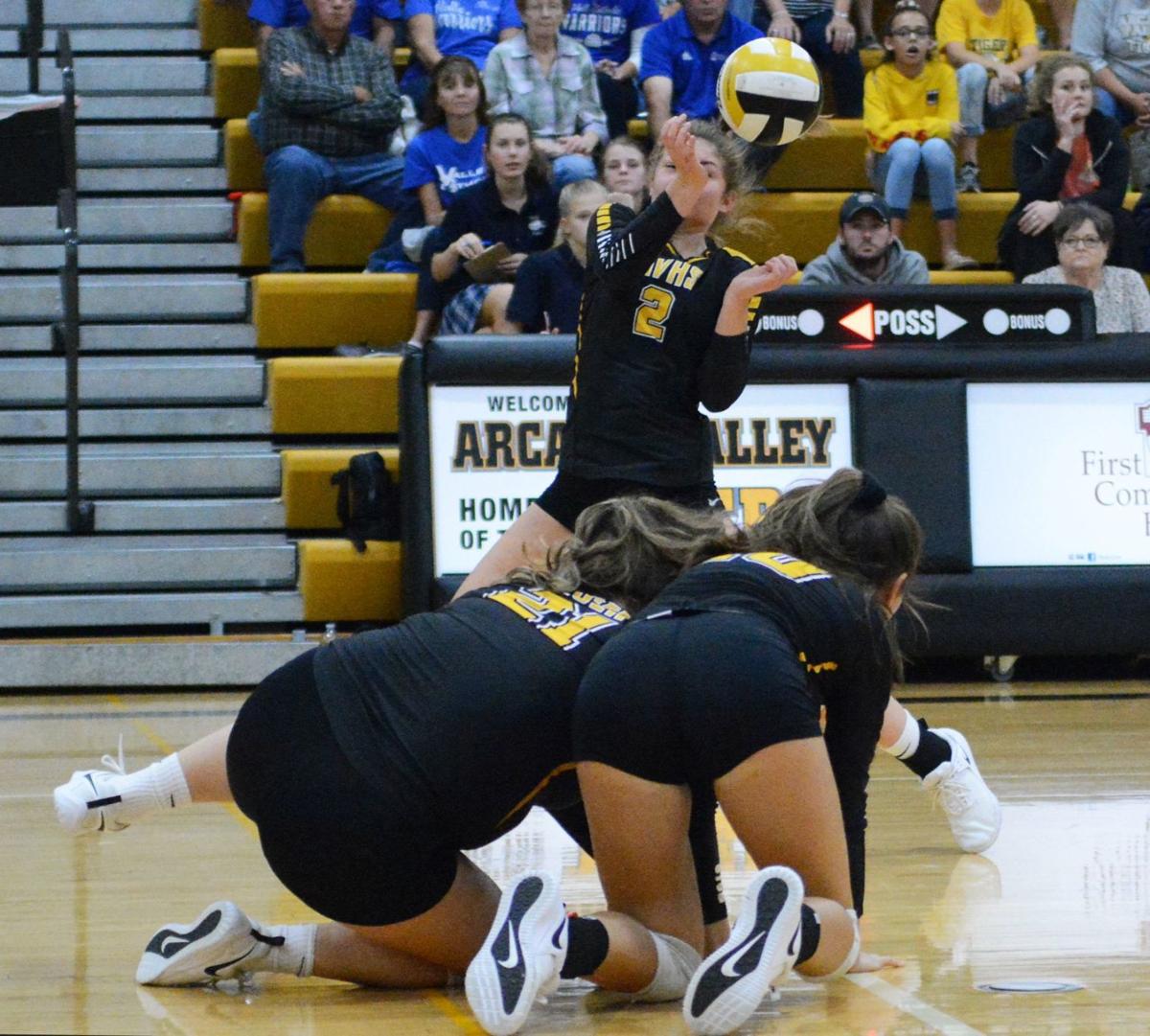 Arcadia Valley freshman Riley Brogan (2) instinctively swats the ball toward the Valle Catholic side after teammates Cierra Layton (21) and Gracee Smith collide in a saving effort during game two action on Thursday night. 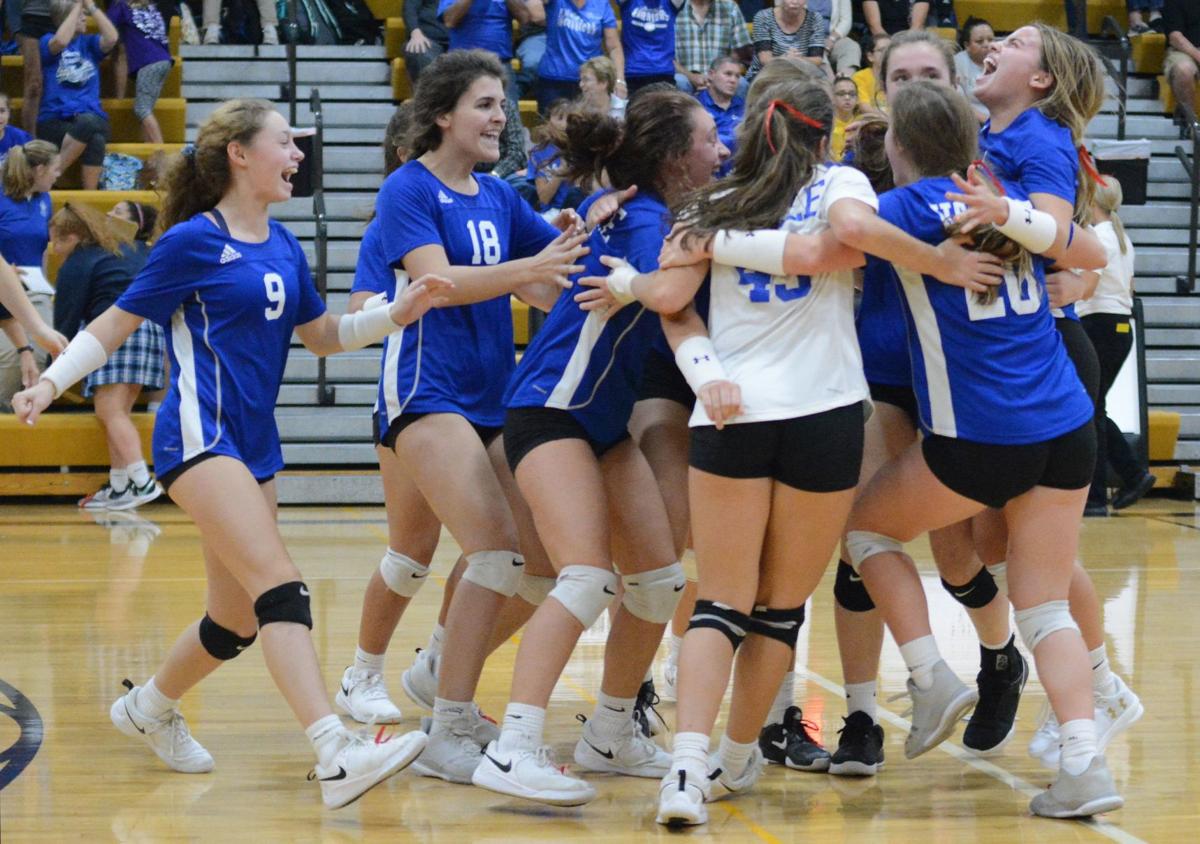 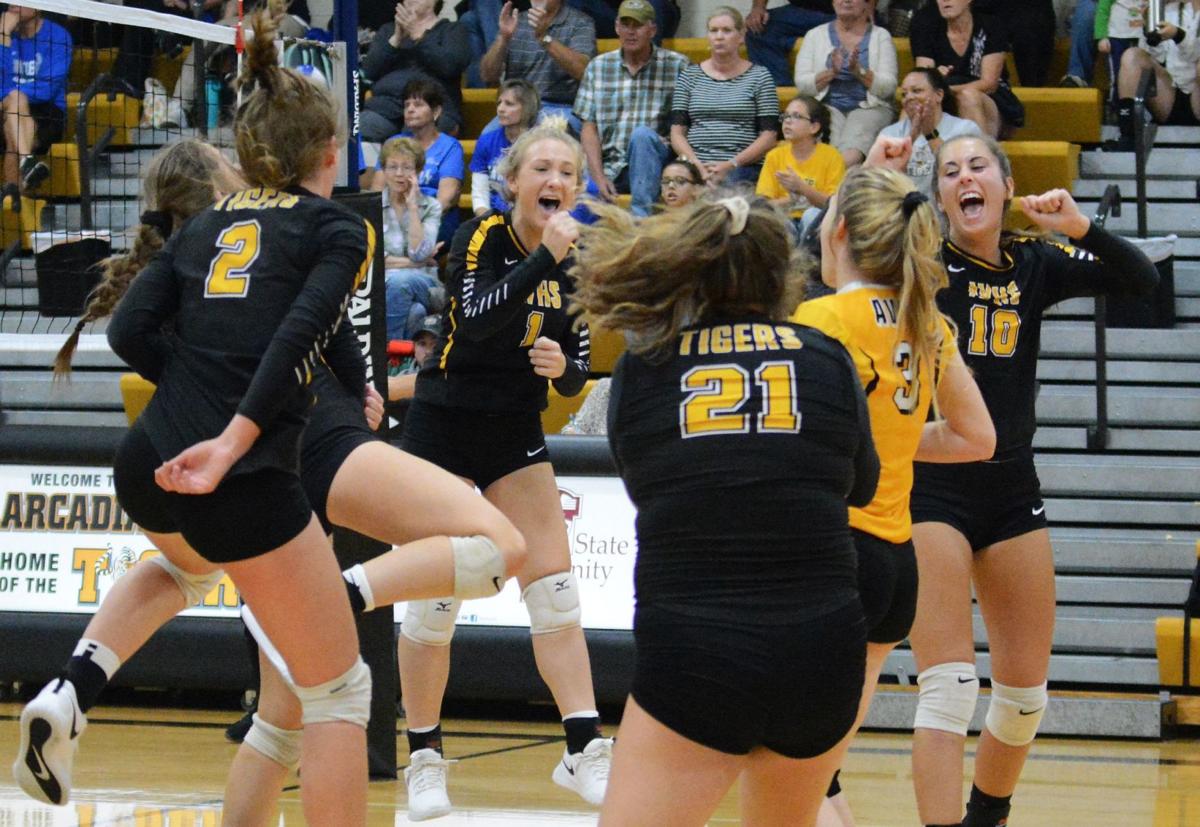 IRONTON – Valle Catholic crushed attacks most often from the outside, while Arcadia Valley rode the power of its dominant middle hitters. The defensive effort on both sides was captivating as expected.

The first of three potential marquee showdowns between the MAAA Small-School rivals on was indeed special on Thursday night, but even more so for the visiting Lady Warriors.

Valle Catholic rallied from one set behind, and was bolstered by the back half of its rotation in the closing stages of a 21-25, 25-19, 25-20 road triumph.

Junior and three-year starter Riley Siebert connected on 15 kills, and the Lady Warriors gained sole possession of first place in the conference while padding its résumé for a future No. 1 district seed.

Hailey Weibrecht totaled eight kills plus five blocks, and applied the final swing as an Arcadia Valley dig caromed off the rafters and fell safely after Sam Loida presented match point with an ace.

The decisive game contained eight ties and six lead changes. The Lady Tigers, who honored five seniors before their final home contest, moved ahead 17-15 when Kirsten Day buried an overpass.

Valle Catholic (17-5-1, 4-0) responded with a crucial 6-0 run out of a timeout, served by Bryna Blum and bookended by kills – one tipped and one spiked – from Hannah Drury.

Three of those points were gifted by AV on two attacking errors and confusion on a quick set. Weibrecht made it 20-17 after her squad had been denied on stellar digs by Katie Whited and Gracee Smith.

Weibrecht had eight kills and notched her fifth block on a stuff after the margin had tightened to 21-19. Drury also concluded with eight kills along with three blocks.

The Lady Warriors sealed the outcome as all-state attacker Maddie DeMent remained stationed on the back row for the Lady Tigers, one rotation away from progressing forward.

The host school built its largest separation of game three at 7-4 after DeMent terminated a riveting rally and combined with Sammi Layton on a previous double block.

Valle countered with six straight points on the serve of Drury, and grabbed a temporarily lead when Siebert slid a cross-court cut between three defenders.

The action beyond the 10-foot line was equally intense as players fearlessly crashed against the floor to extend rallies or give their teammates an extra fraction of a second to clear on pure instinct.

Valle earned a remarkable point late to lead 23-18 in game two. Libero Brooke Viox flung the second ball over her shoulder while landing on a knee several feet past the back line, and Rachel Loida cleared while falling with her back to the net before Drury spiked the kill off an ensuing AV free ball.

Earlier in the middle set, the Lady Tigers held a 7-6 edge as Whited made a sliding pickup in the right back corner and DeMent pulled a pass from the net before Noley Kitchell batted a soft Valle attack directly over before the Lady Warriors could react.

Siebert put down three kills in a span of four points to spot the Lady Warriors a 19-14 lead, and they eventually leveled the match at one game each.

Arcadia Valley (17-5, 3-1) twice trailed by four points in game one, and remained down 16-13 on two Rachel Loida aces before finding a consistent rhythm and storming back.

Day forged a 20-20 tie while hitting from the right side, and DeMent tipped through a crowd for a 22-21 edge after Valle suffered its third service error.

DeMent capped the closing 5-0 streak with two more successful swings from the middle after Day had landed six kills in the stanza.

The outcome likely settled the second and third seeds for the upcoming MAAA Tournament if the Lady Warriors can handle cross-town rival Ste. Genevieve on Monday.

Arcadia Valley freshman Riley Brogan (2) instinctively swats the ball toward the Valle Catholic side after teammates Cierra Layton (21) and Gracee Smith collide in a saving effort during game two action on Thursday night.