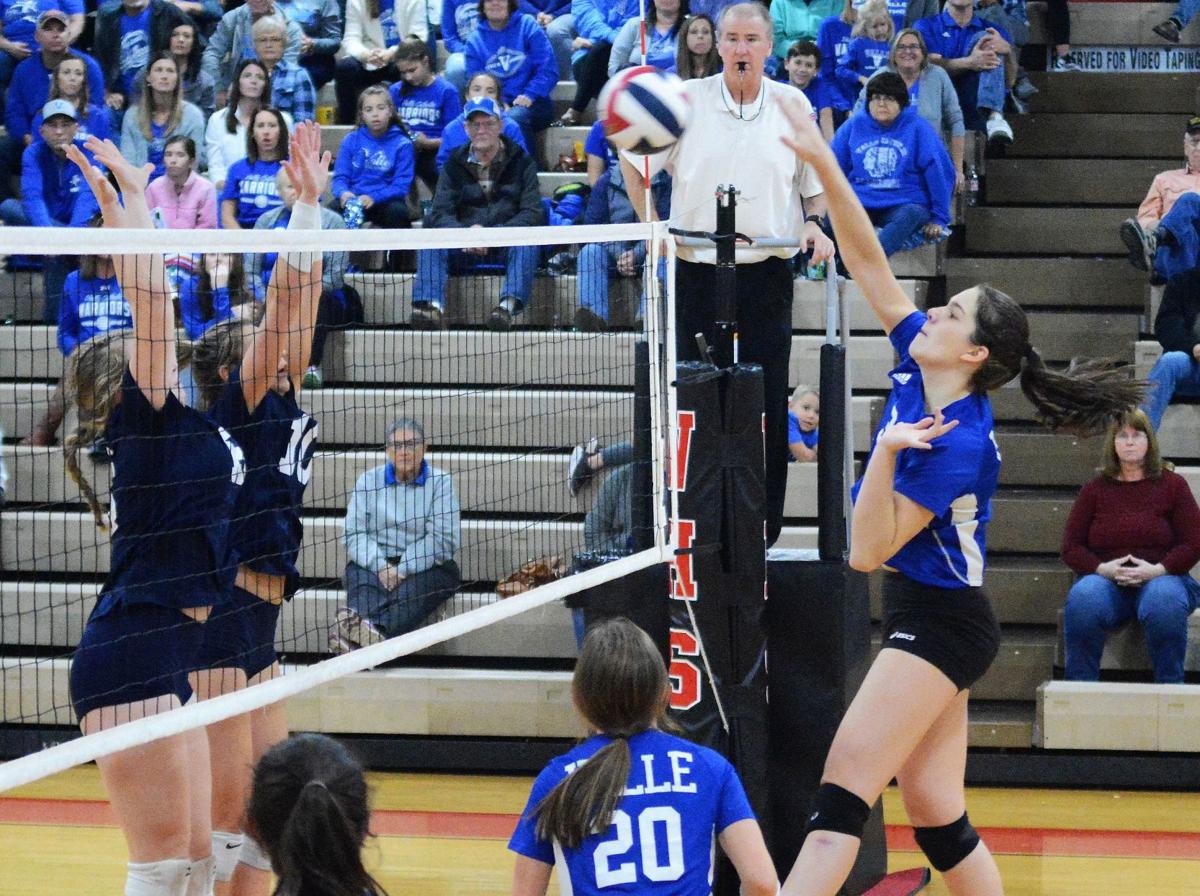 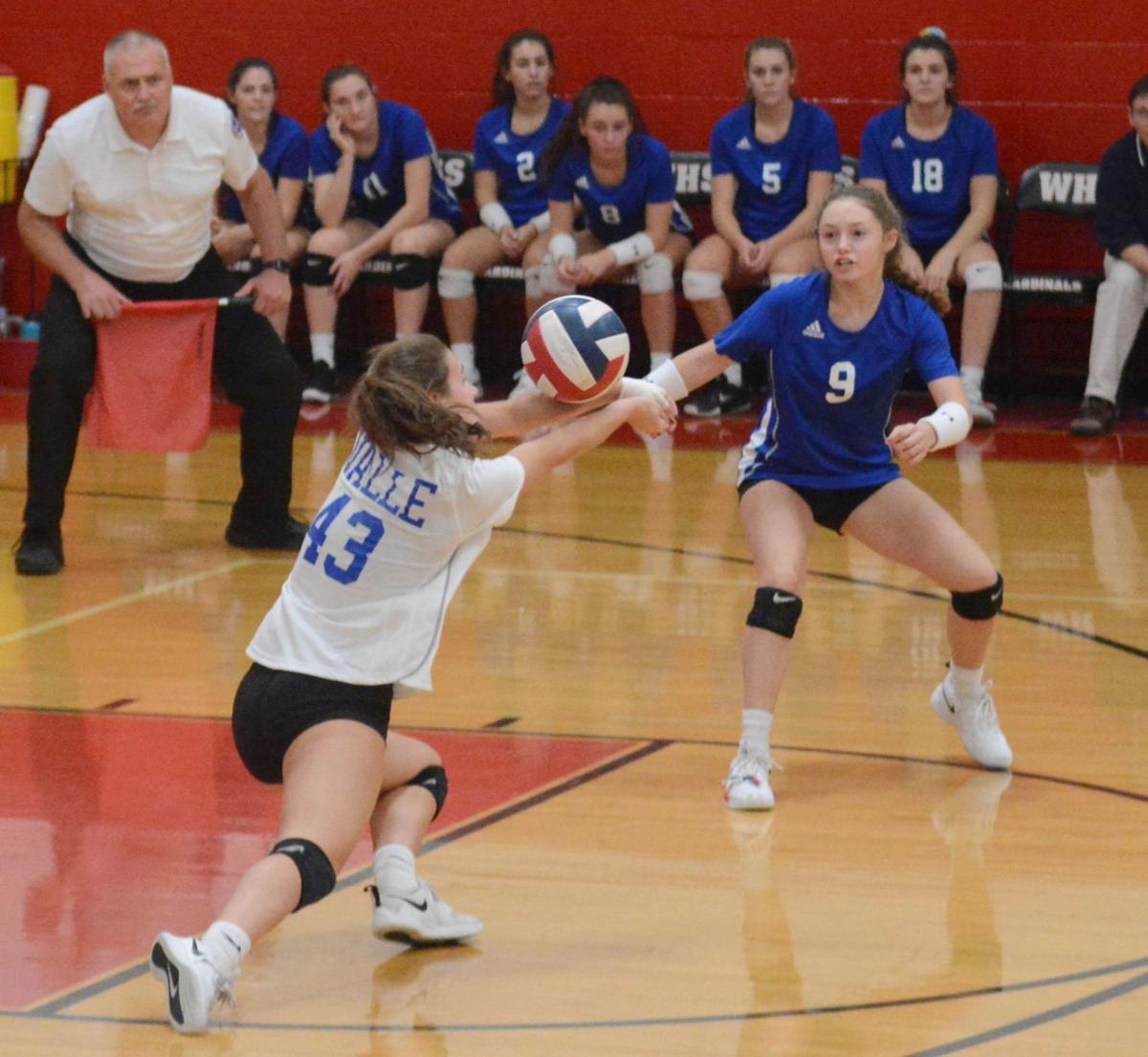 Valle Catholic senior Brooke Viox (43) reaches out to receive a Woodland serve as Mia Weiler (9) looks on during a Class 2 state sectional match on Saturday afternoon. 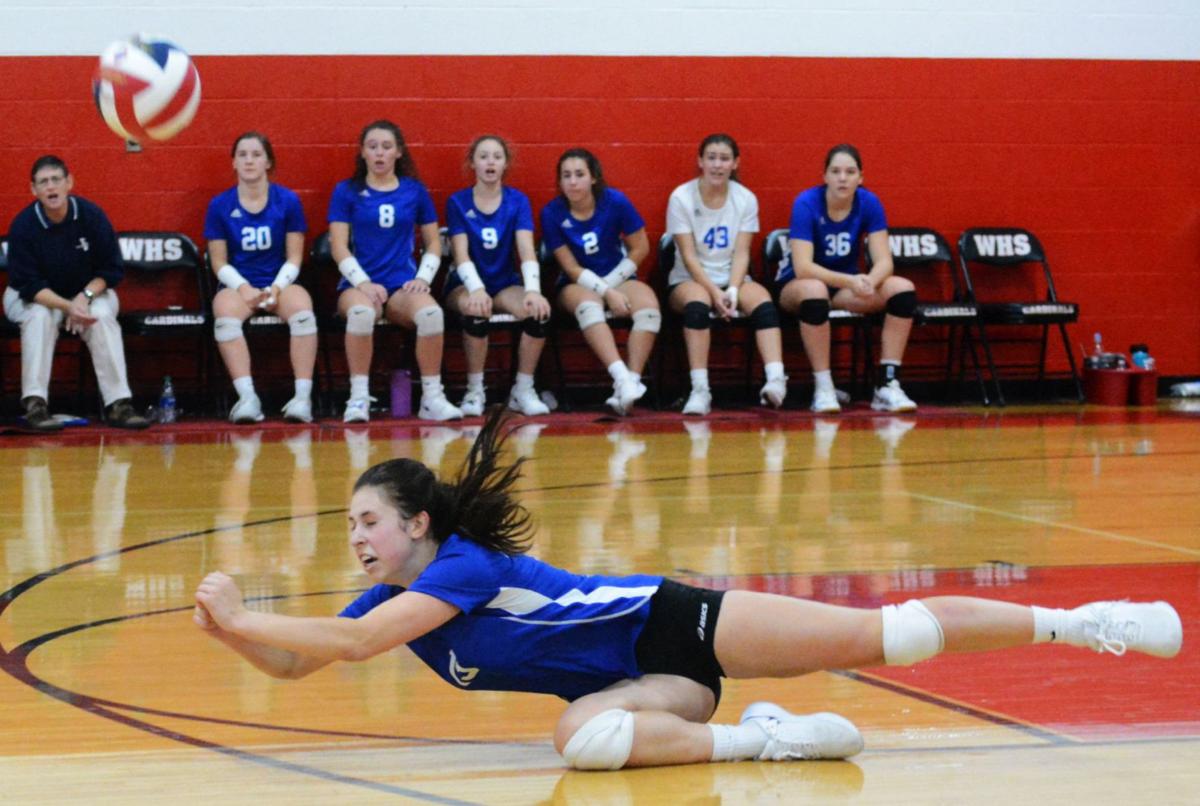 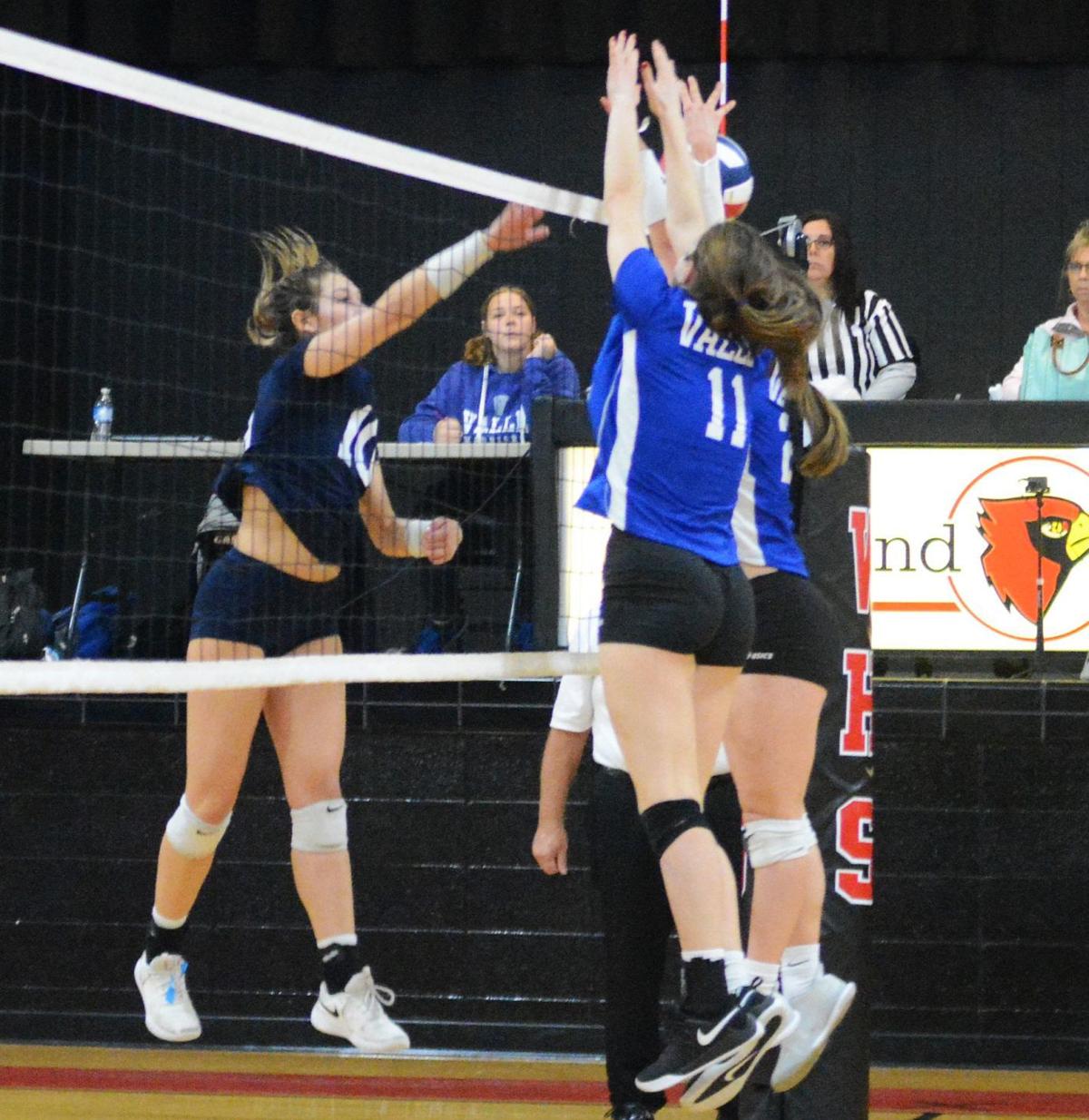 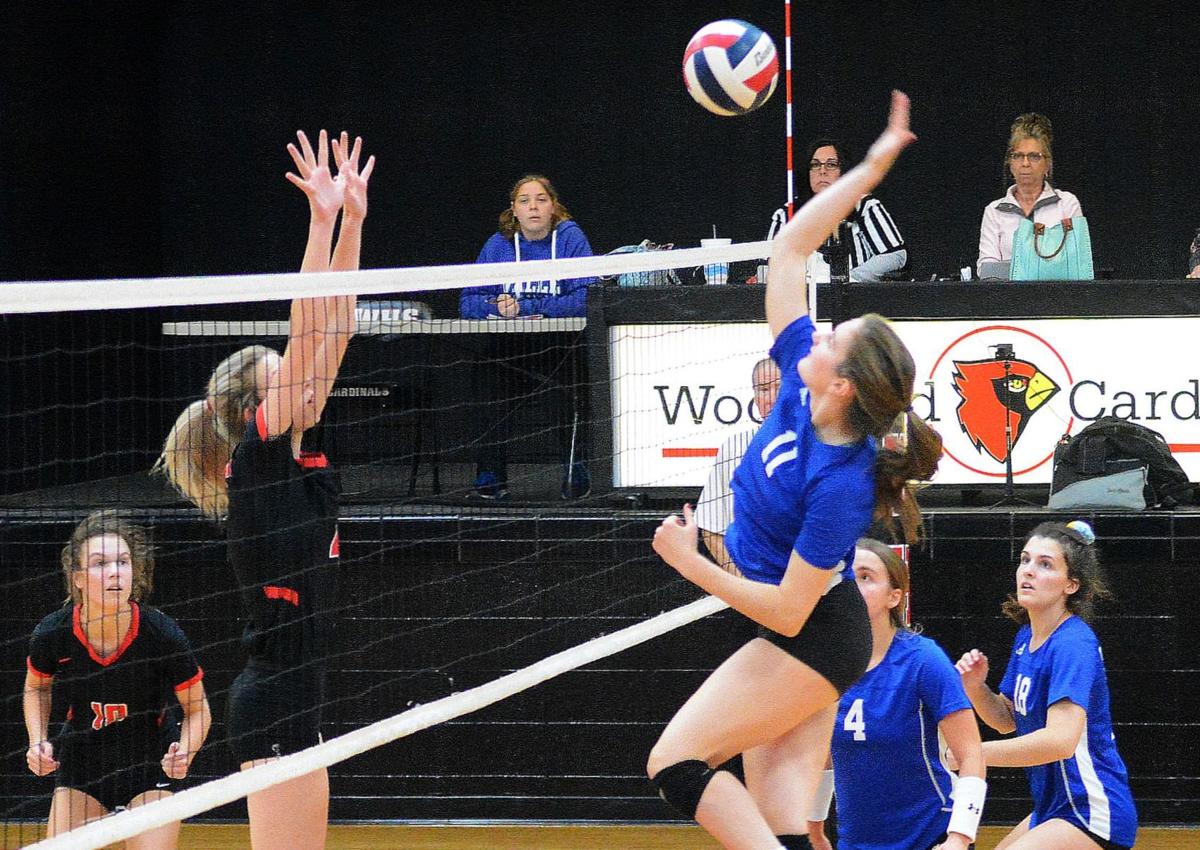 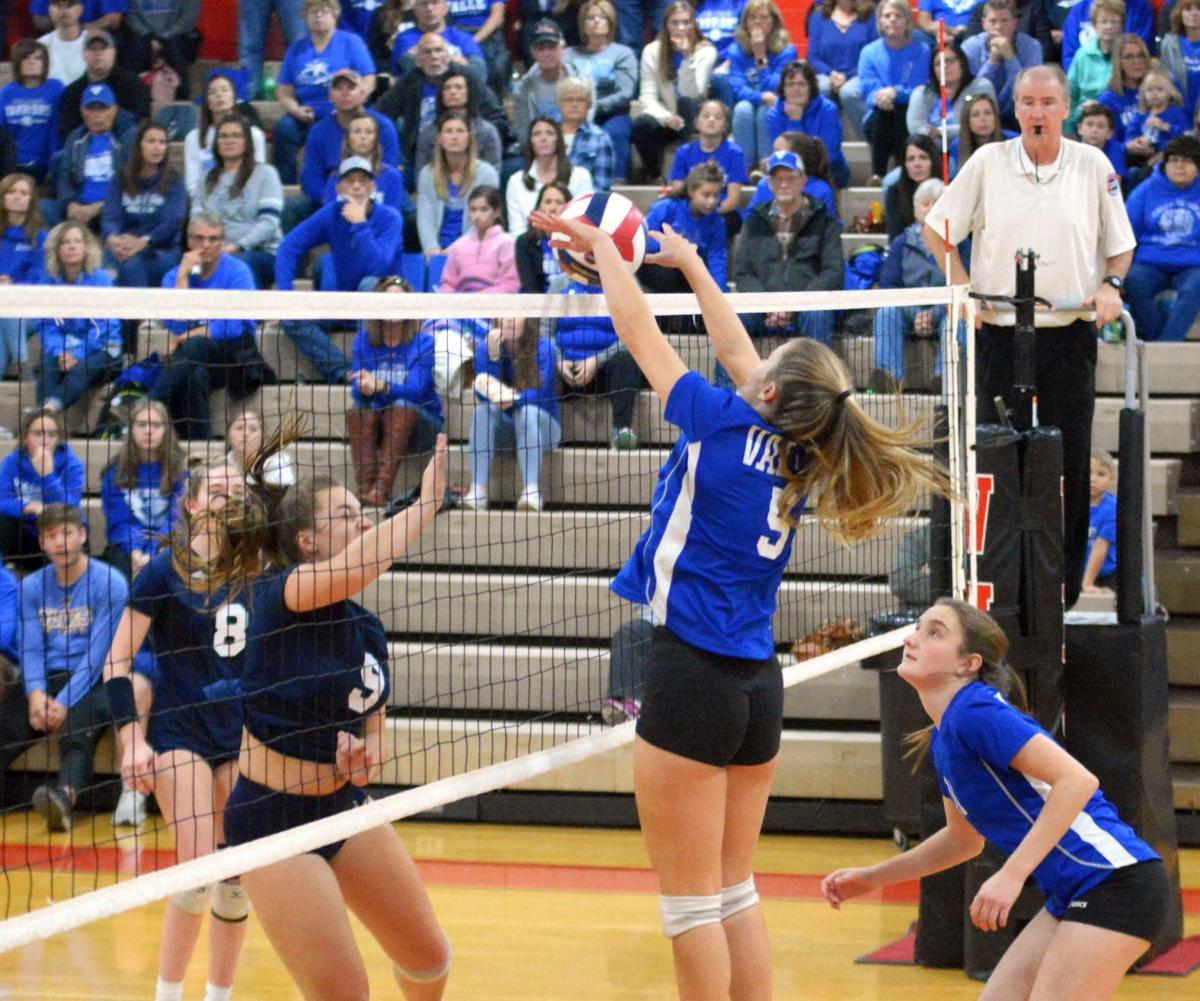 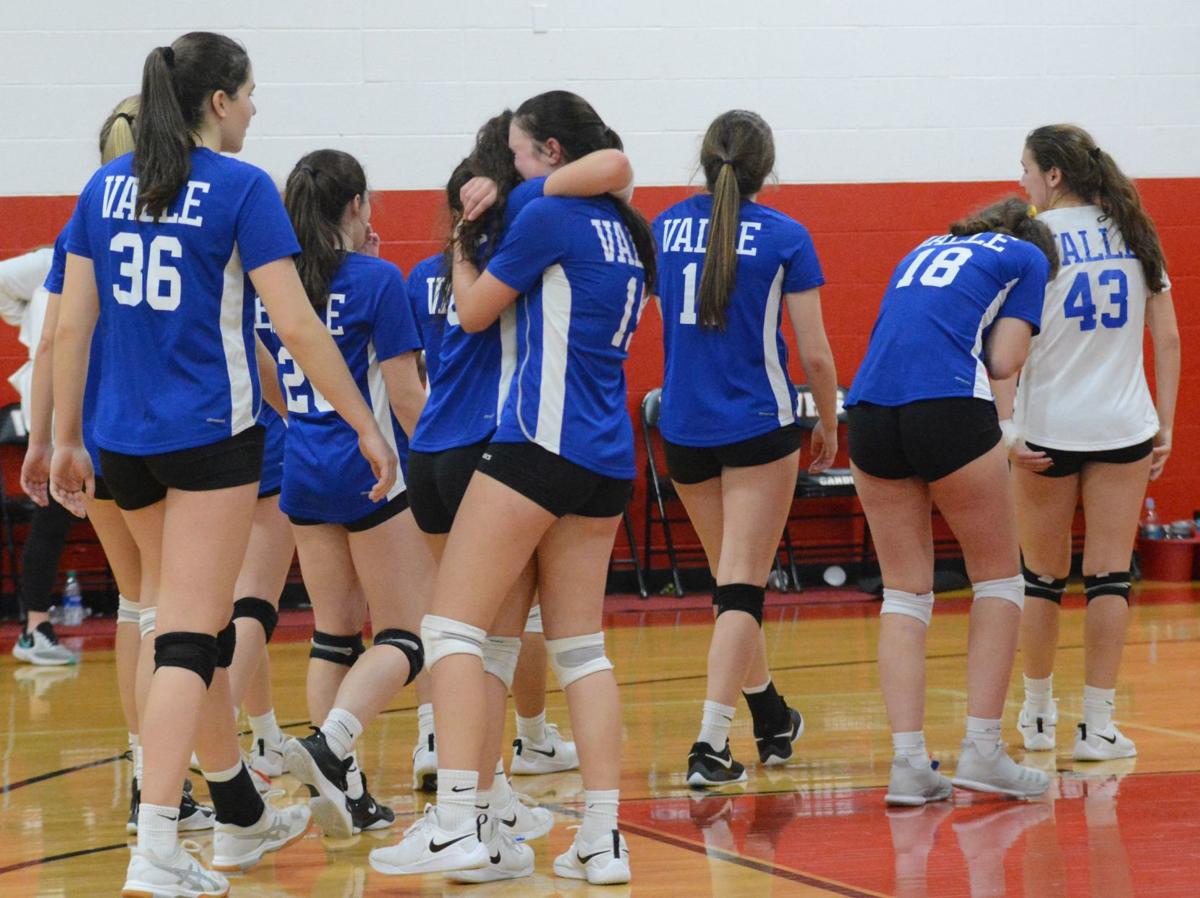 Valle Catholic players leave the court after suffering a three-set loss to St. Pius in a Class 2 state quarterfinal match on Saturday night.

The Lady Warriors were two points away from capping a spirited comeback for a ticket to the Class 2 volleyball state final four after trailing St. Pius by five moments earlier on Saturday night.

But the Lancers turned to star attacker Caly Otec for consecutive kills, and instead extended their season to championship weekend with a riveting 25-21, 19-25, 25-23 quarterfinal triumph.

“We knew that Valle was tough and would not back down. Watching them play earlier against Woodland, I knew this was going to be a battle,” St. Pius head coach Shannon Leftridge said.

“We just tried to work to our strengths with Caly Otec and Kennedy Lane. They are our big bangers on the pins, and really came through for us tonight. Valle is more middle heavy, and we were able to adjust our defense.”

Lane shined as a sophomore with 20 kills on 36 attacks. Otec finished with 16 kills, and made no mistake on either of her last two chances after game three was tied 23-23.

Valle Catholic (26-7-1) was afforded one swing when facing match point, but sophomore Summer Meyer fought it off with an accurate pass, and Otec delivered a clincher that skimmed off a touch and changed trajectory.

The jubilation on one side was contrasted by heartache for the Lady Warriors, who found themselves in a familiar situation but could not escape this time.

“We dug ourselves a hole and had to crawl out, but we’ve done that a number of times this season,” Valle Catholic head coach Nancy Fischer said. “Once we came back in the third set, we hoped that we could maybe push through, but it’s really tough to control those hard hitters of St. Pius.”

Lane executed a double block with freshman Hanna Burch, then knocked down two straight kills as the Lancers established a healthy 22-17 lead down the stretch.

Bertram sparked resilient Valle with an ensuing kill and stuff-block, and Hannah Drury spiked successfully after a sliding dig by libero Brooke Viox.

The Lady Warriors were gifted a point on a net violation as an attack was heading out of bounds, and pulled even at 23-23 when sophomore Hailey Weibrecht connected from the middle.

Mutual respect was obvious between two programs with rich traditions, as opposing players laughed and visited during a customary 30-minute pause before engaging in a fierce classic.

The Lancers were aiming for a sweep after a dominant rotation created an 11-7 cushion in game two, punctuated by two more bullets from Lane stemming as the result of free balls.

She would misfire on three subsequent points, however, and Valle Catholic moved ahead 15-14 with Bertram driving down a quick set from Sam Loida.

Otec kept St. Pius within 16-15, but the match was soon square as senior captain Rachel Loida served back-to-back aces during a huge 7-0 streak. Drury spiked off a defender to make it 22-15.

“We showed that we’re never going to give up, no matter what the score is or who we are playing,” said Loida, who compiled 16 assists, 13 receptions, five digs and three aces in her final varsity match.

“During the entirety of this game, our main focus was to play how we know to play,” she added. “I think that we did that pretty well, but Pius just came out a little better tonight.”

The first set contained 13 ties and no lead larger than two through 38 points. Otec provided kills as St. Pius moved ahead 5-3 and 18-16.

Taylor Zerwig and Viox handled blistering spikes, and Weibrecht flung an arm out to save another ball near the net during a defensive clinic for Valle on a prolonged early rally.

“It’s just the whole idea that we have on the back of our shirts that say ‘We are family,’” Fischer said. “The girls have really bought into that this year, and do so much to make everyone else play better.

“When they are out there, they will always give 110 percent. You can’t ask for anything more than the effort we got today.”

Weibrecht answered a kill by Ava Werner with a solo block at 19-19, but the Lancers claimed the next four points before two more smashes by Lane secured a one-game advantage.

Valle was bolstered by 15 receptions, six digs and two aces from Mia Weiler, plus 13 assists and six shared blocks by Sam Loida.

Bryna Blum chipped in six digs, including a stellar reaction with an extended fist while falling back that fueled the Lady Warriors’ closing charge.

Riley Siebert paced a potent and diverse attack with 17 kills, and Valle Catholic outlasted Woodland 26-24, 23-25, 25-22 to advance past the sectional round earlier Saturday.

Excellent court coverage on match point secured the outcome for the Lady Warriors, who never trailed in the third game despite being severely tested amid a hostile environment.

Hailey Weibrecht scored from the left side after Selena Sanford caught the back line for Woodland on the previous rally at 23-22.

Siebert blocked the ball upward during the final sequence, and Loida flicked the next contact over the net while in setting position before the Cardinals could recover.

Brooke Viox amassed 16 digs and 16 serve receptions, and executed superb digs ahead of two pivotal kills from Siebert and Drury for an eventual 19-15 margin.

Woodland (25-5-3) mounted a challenge as sophomore Riley Massa stuffed a spike and tipped another point down. Chloe Goodwin mixed speeds on two landing attacks to make it 22-21.

Maddison Altenthal powered the Cardinals with 11 kills and seven blocks, and applied the final kill of game two following a controversial call.

The Lady Warriors thought the stanza was tied on a shot down the line. It was instead called wide to their astonishment, making the score 24-22.

Altenthal had restored a 17-11 Woodland advantage with a cross-court laser after Ally Whitener put one down from the left side at 16-10.

Siebert answered with four kills during a single progression across the front, and consecutive swings by Drury and Bertram soon leveled the tally. Bertram briefly put Valle ahead 22-21 with a block.

Addie Johnson had eight kills and Emma Brown supplied seven kills with 12 digs for the Cardinals, who approached the precipice of claiming game one after leading 19-16 at home.

Siebert and Bertram fired back with clutch kills ahead of a tying ace by Mia Weiler, and the teams would alternate the next nine points in an intense slugfest as Woodland led 24-23.

Woodland flubbed an ensuing ace from Drury, and Weibrecht landed her next opportunity from the middle after the Cardinals could only clear.

Valle Catholic senior Brooke Viox (43) reaches out to receive a Woodland serve as Mia Weiler (9) looks on during a Class 2 state sectional match on Saturday afternoon.

Valle Catholic players leave the court after suffering a three-set loss to St. Pius in a Class 2 state quarterfinal match on Saturday night.