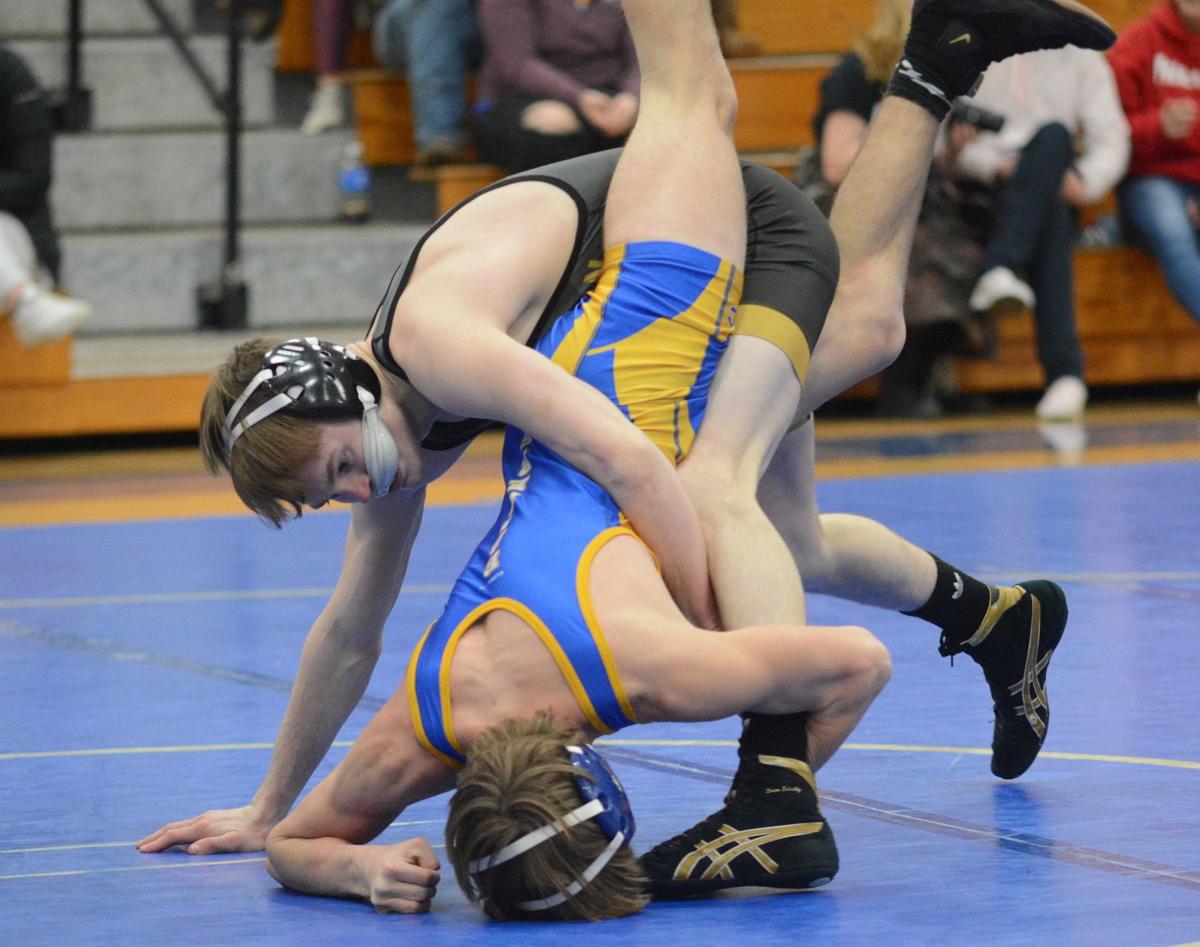 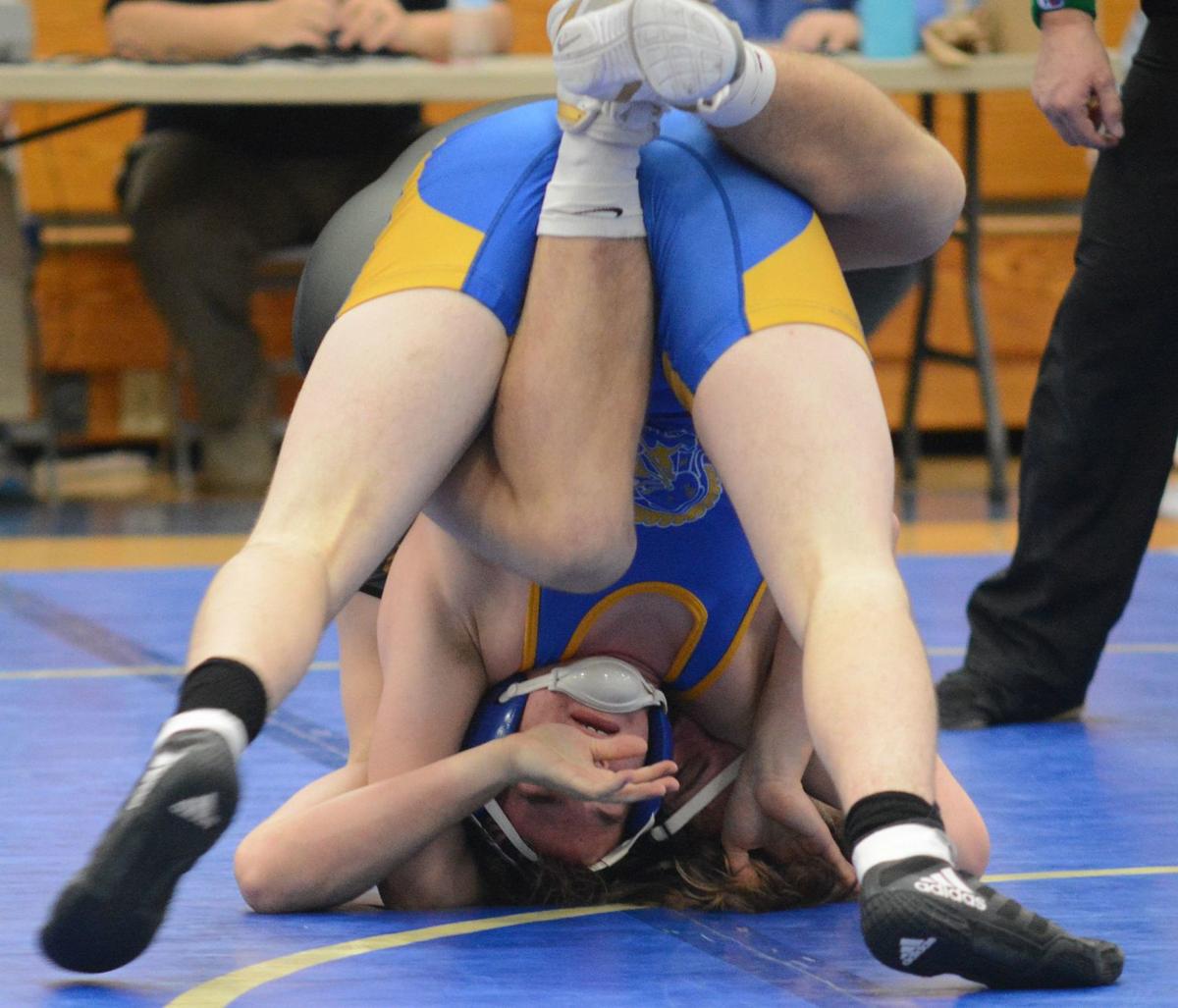 North County's Anthony Wilson tries to maintain his balance while wrapped around the hip and shoulder by Farmington opponent Kael Krause during a 170-pound wrestling match on Tuesday night. 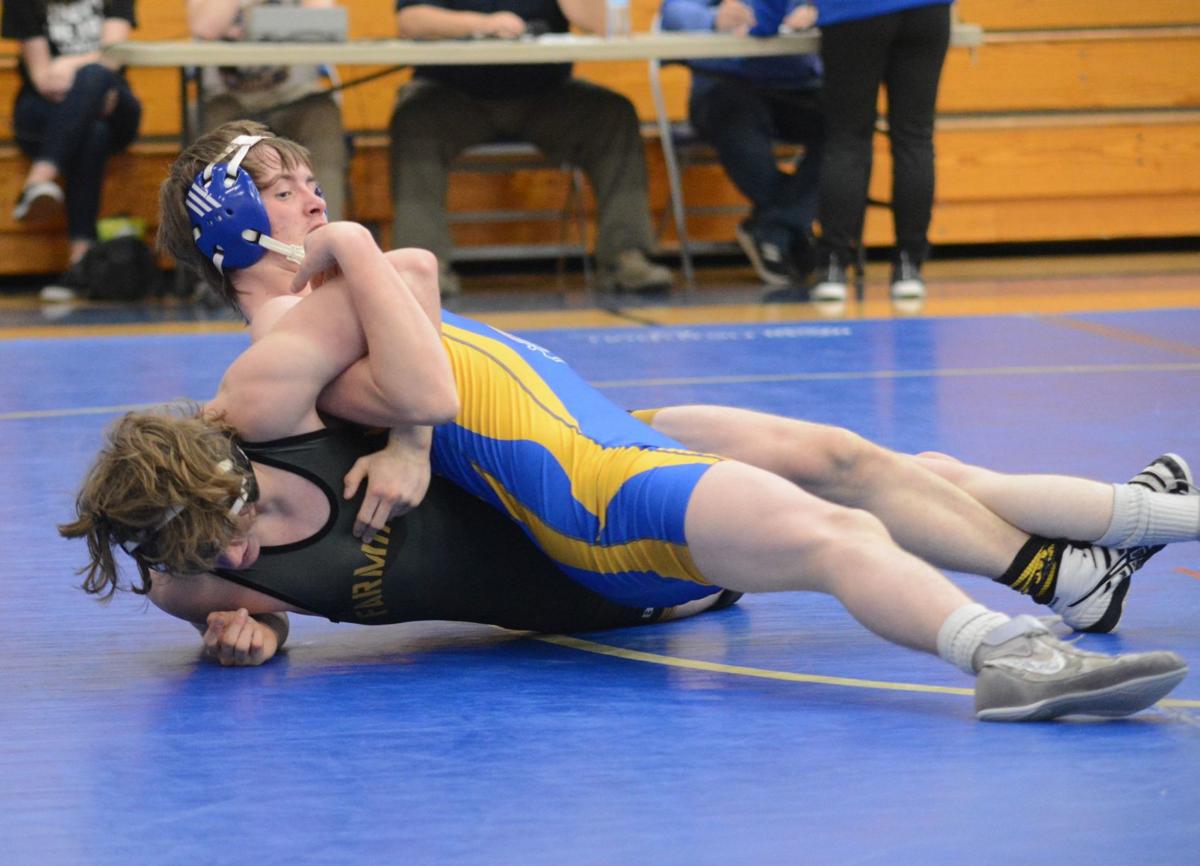 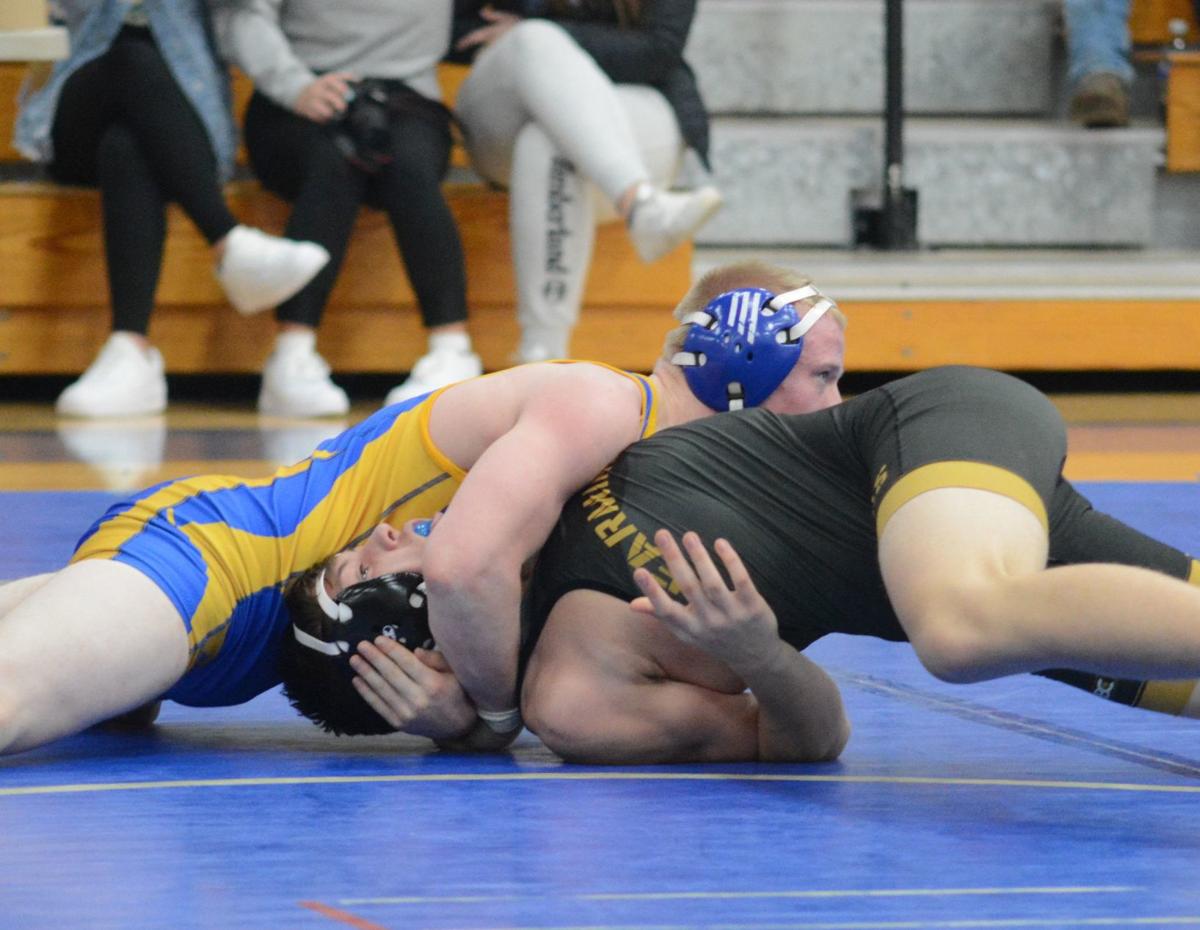 North County's Anthony Wilson tries to maintain his balance while wrapped around the hip and shoulder by Farmington opponent Kael Krause during a 170-pound wrestling match on Tuesday night.

Blake Cook (132) used a twisting reversal – his second of the bout – to break a 5-5 tie late in the second period of a solid battle against Amos Littrell.

Littrell sought a head-and-arm reversal instead of a standard escape when starting the third from the down position, but Cook kept control of the waist and hooked a wing for a near fall and 9-5 win.

Drew Felker (138) stopped Jordan Borseth from driving through him by grasping an ankle, and stepped around once his balance was taken away for the lone takedown in a 3-1 victory.

Branch ducked to slide behind Aaron Huff and score twice in rapid succession during the initial stages at 145 pounds, and rolled him backward into a cradle and fall at 1:23.

Vinson (152) secured takedowns in each of the first two periods, and trapped the upper body of Austin Halter before forcing the second shoulder to the surface at 4:24.

Wadlow (120) was tested for a while by Jonathon Coroama, who entered the night with one loss on the season. The first takedown belonged to Wadlow, but his high grip around the head and a left leg slipped and Coroama capitalized for a tying reversal.

Wadlow regained command with a cradle and near fall ahead of the second-period buzzer. He blocked a subsequent throw and landed on the chest of Coroama to soon prevail at 4:24.

Crawford (126) looked to end the proceedings against Chris Singleton right away, earning a double-leg takedown and near fall before going out of bounds.

Singleton showed resolve with a successful single-leg into a waistlock to score during the second period, but yielded two more takedowns in the third as Crawford notched a 15-4 major decision.

Simily (220) rolled through attempted tackle and rode out the second period against Mason Lay for a 7-0 lead before getting the fall on a sudden slip at the 5:07 mark.

Austin DeClue (160) sparked the Raiders with a sudden change in fortunes after Luke Houston executed a throw and near fall midway through the first period.

While momentarily on his knees behind Houston, DeClue snatched the head and one arm backward and shifted his weight while for a pin at 1:47.

North County was also on the positive side of two 9-8 decisions as Cody White (113) edged Dayton Boyd and Anthony Wilson (170) topped Kael Krause.

White secured his third double-leg takedown of his match to build a six-point lead with 15 seconds left, but needed to wriggle free after Boyd slung him down for a sudden near fall.

Krause mounted a similar comeback for Farmington after trailing by five early. He conceded an escape before attacking again for a tying go-behind while building momentum.

Wilson prevailed by completing an escape near the edge of the circle with eight seconds left, and stayed upright until time expired to survive.

Wilson controlled the first period, and was ahead 5-0 after Krause resisted long enough to reach the buzzer and regroup.

Mikayla Whatley earned the fall for North County against Chloe Wampler in a girls bout that followed the varsity boys. Taizja Lawless topped Wampler in an earlier exhibition.

What kind of craft beer are you?