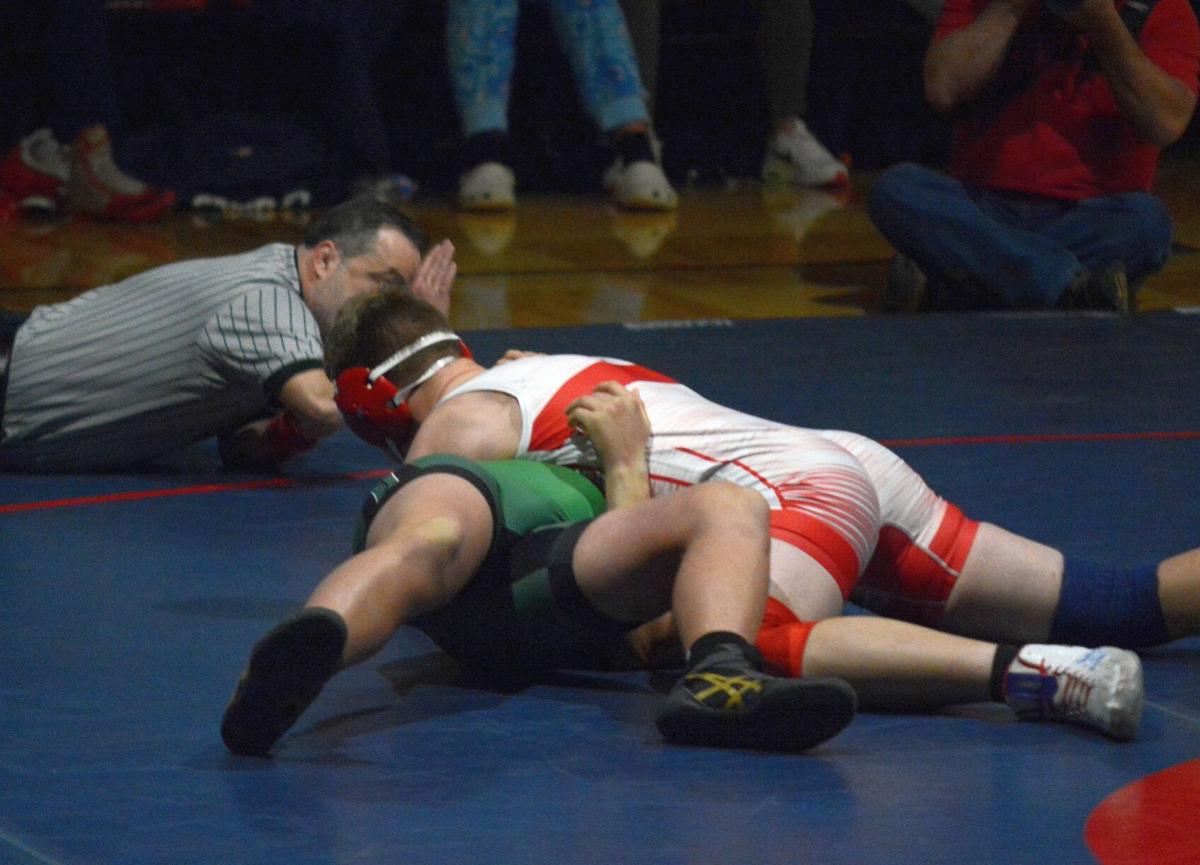 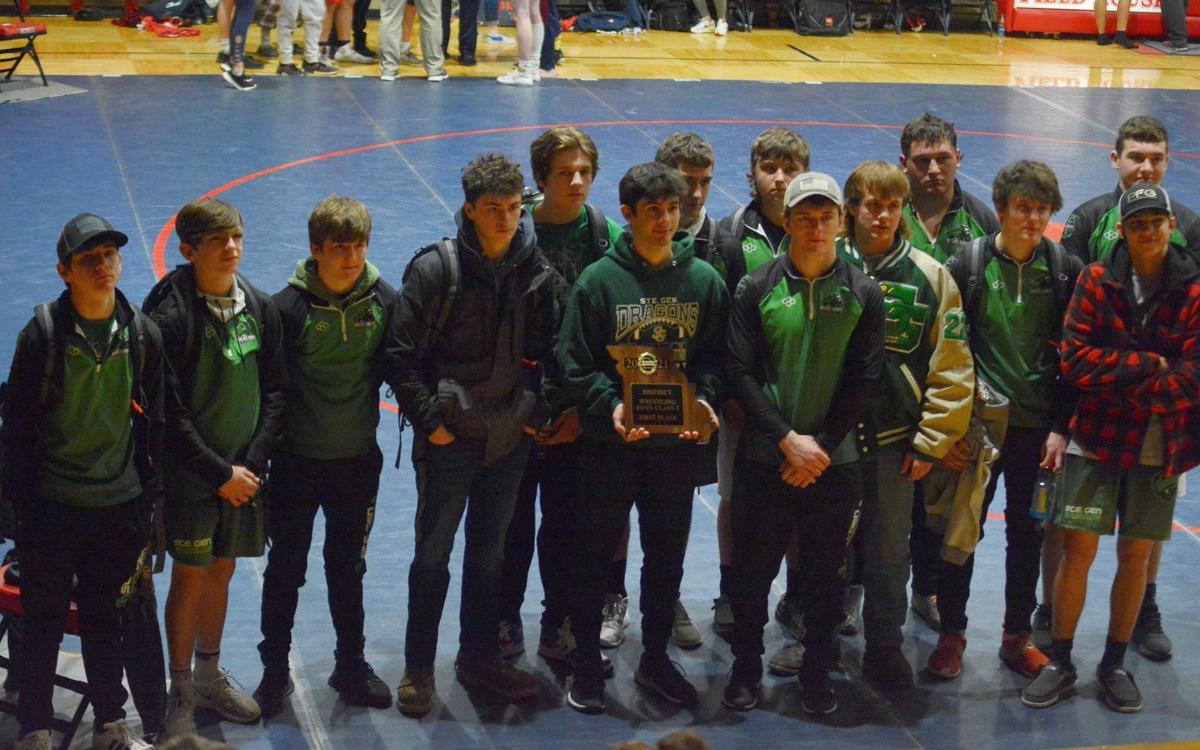 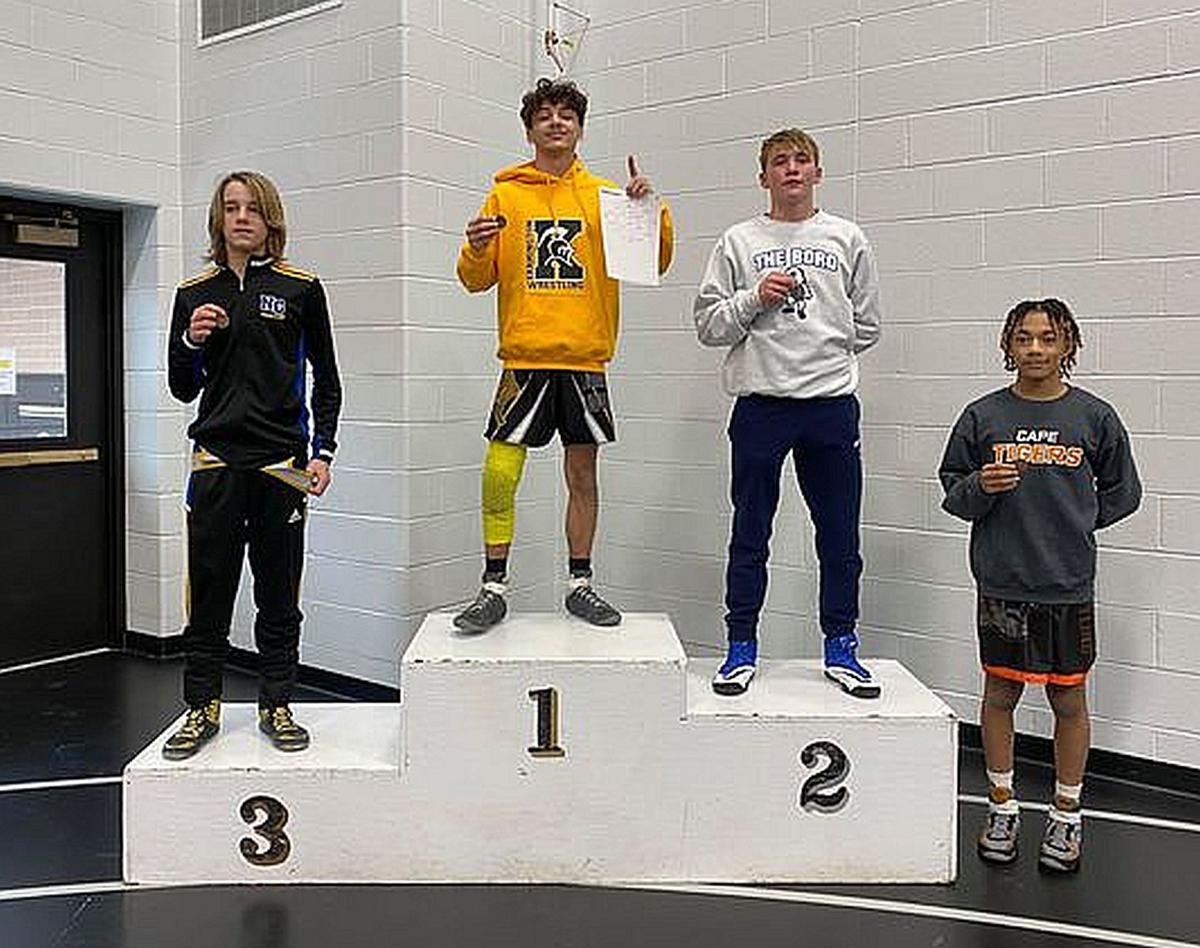 Farmington junior Dayton Boyd stands atop the medals podium after capturing the 113-pound bracket title at the Class 3, District 1 boys wrestling tournament on Saturday in Farmington. 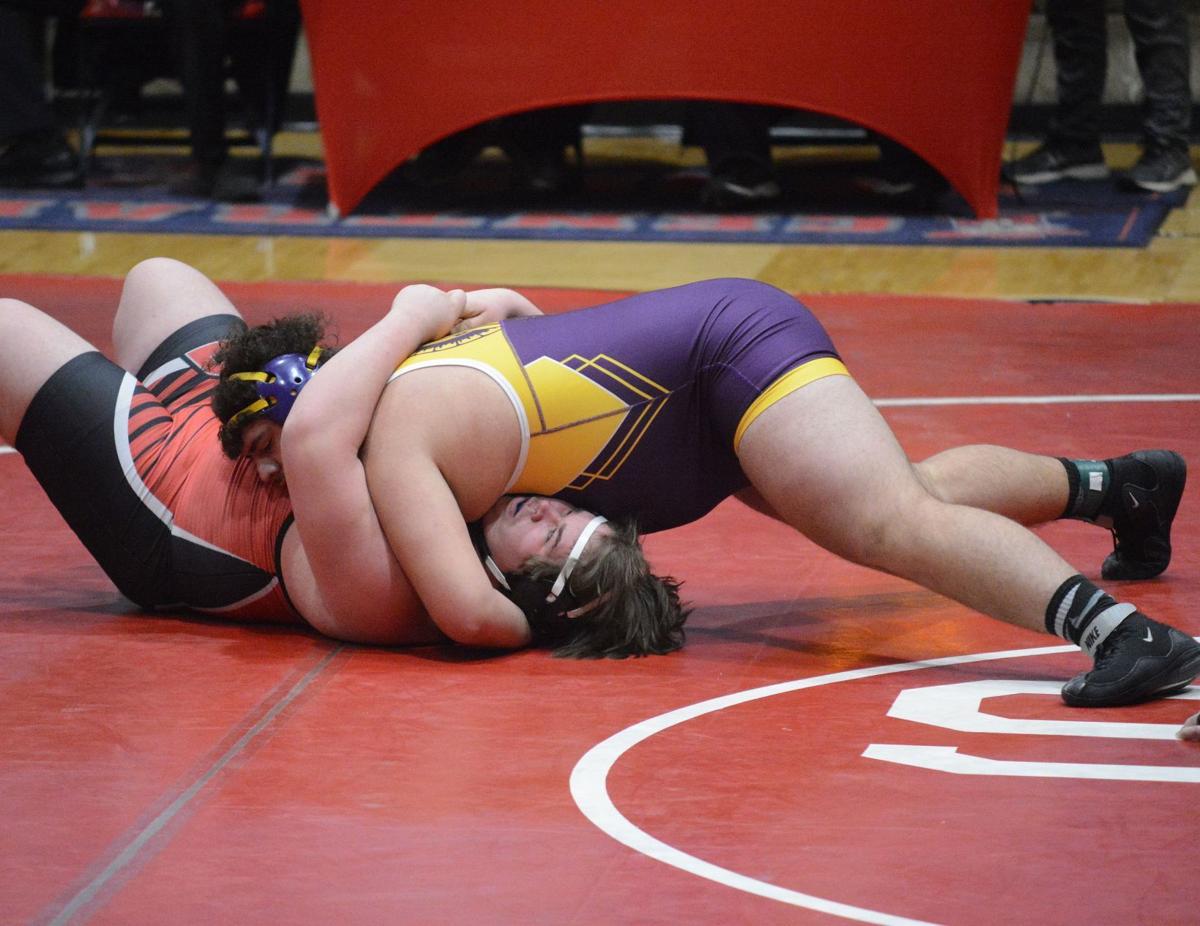 Dexter held off tournament host Central for second in the standings, but the Rebels salvaged bragging rights of their own with five different district champions.

Gage Gross set the winning tone for Ste. Genevieve at 106 pounds, and maintained a team-best 24-1 record by pinning his final competitor just before the first quarter expired.

Central was a perfect 5-0 against Ste. Genevieve In head-to-head title bouts, but lacked the supporting victories in the consolation rounds.

Kade Willis (138) returned to action after an extended period to rest a nagging shoulder injury, and remained unbeaten on his senior season at 25-0.

Hunter Settles (160) provided another highlight for the Rebels with a 4-3 triumph over Kaleb Myracle, and was 3-0 for the tournament.

Colten Bess (152) of Central earned his top billing with consecutive falls against Luke Blocker of Dexter and Levi Wiegand of Ste. Genevieve.

Carver had arguably the most efficient day of the five Central champs, pinning all three opponents in the first period. Harris received byes all the way through an open semifinal.

The top four from each bracket advanced the sectional round at Ste. Genevieve in two weeks. Nicholas Wirick (120), Ethan Ogden (170) and Ryan Schmelzle (285) gave the Dragons eight runners-up.

Potosi senior Keki Ortiz topped the heavyweight division with a 1-0 decision over Schmelzle, thanks to an escape in the closing moments of the second period.

Cody Skaggs (182) earned consecutive falls for Central before Hayden Higgins of Kennett stopped his hopes for a title at the 5:18 mark.

The Knights qualified 11 members of their roster for the state sectional round in two weeks at Hillsboro, and went 3-1 against the Hawks in head-to-head title matches.

Boyd (113) trailed reigning state champion Gavin Alexander 2-0, but completed his last chance to force overtime with only three seconds to spare in regulation.

Boyd earned the title via sudden victory on a second takedown with five seconds on the clock, bumping his season record to 27-3 overall.

Cook (132) secured his prize with a fall over Evan Morris at 5:11, and Barber (285) followed up two pins with a 2-1 championship decision against Jordan Jarvis.

Dalton Litzsinger countered with a 10-0 major against Drew Felker favoring the Hawks, who compiled 240 ½ points compared to 162 ½ by Farmington.

The Knights appeared in six separate finals, and seniors Kael Krause and Judd Cunningham equaled the runner-up showing of Felker.

Krause (170) struck first with a takedown, and added an escape for a 3-0 lead early in the third period. Opponent Luke Bradley of De Soto rallied for a takedown and near fall to steal the 4-3 win.

Cunningham (182), who recently signed to play football at SE Missouri State, faced a daunting task in the 182-pound final. Unbeaten Festus star Luke Shaver prevailed 11-3 to reach 39-0 on the season.

Coroama (120) carried a 22-0 mark into the final, but could not overcome Aidan Haggard of Hillsboro in a 5-2 setback. Borseth (152) was pinned by Griffin Ray after previously covering Brady Cook.

Littrell (126) competed three times, and notched a stellar semifinal fall at 1:53 over Festus standout Andrew Nehlik, who had compiled a 31-2 record entering the match.

With only five schools in attendance, the Warriors managed to propel nine wrestlers into the sectional phase by placing among the top four individually.

Flieg pinned both of his opponents during first period action at 120 pounds, and Bieser prevailed at 145 pounds with a fall and 12-8 decision.

Jacob Calbreath (220), Tim Okenfuss (160) and Kaden Gegg (106) each placed second for the Warriors after reaching the finals of their respective divisions.

Jackson Fowler and Brandon Giesler scored falls in their third-place bouts while Jayce Bales and Gavyn Joggerst both received byes.

Mark Krause shined as a state placer during his high school wrestling days, and made the decision to keep the sport as a permanent fixture in …

Farmington junior Dayton Boyd stands atop the medals podium after capturing the 113-pound bracket title at the Class 3, District 1 boys wrestling tournament on Saturday in Farmington.