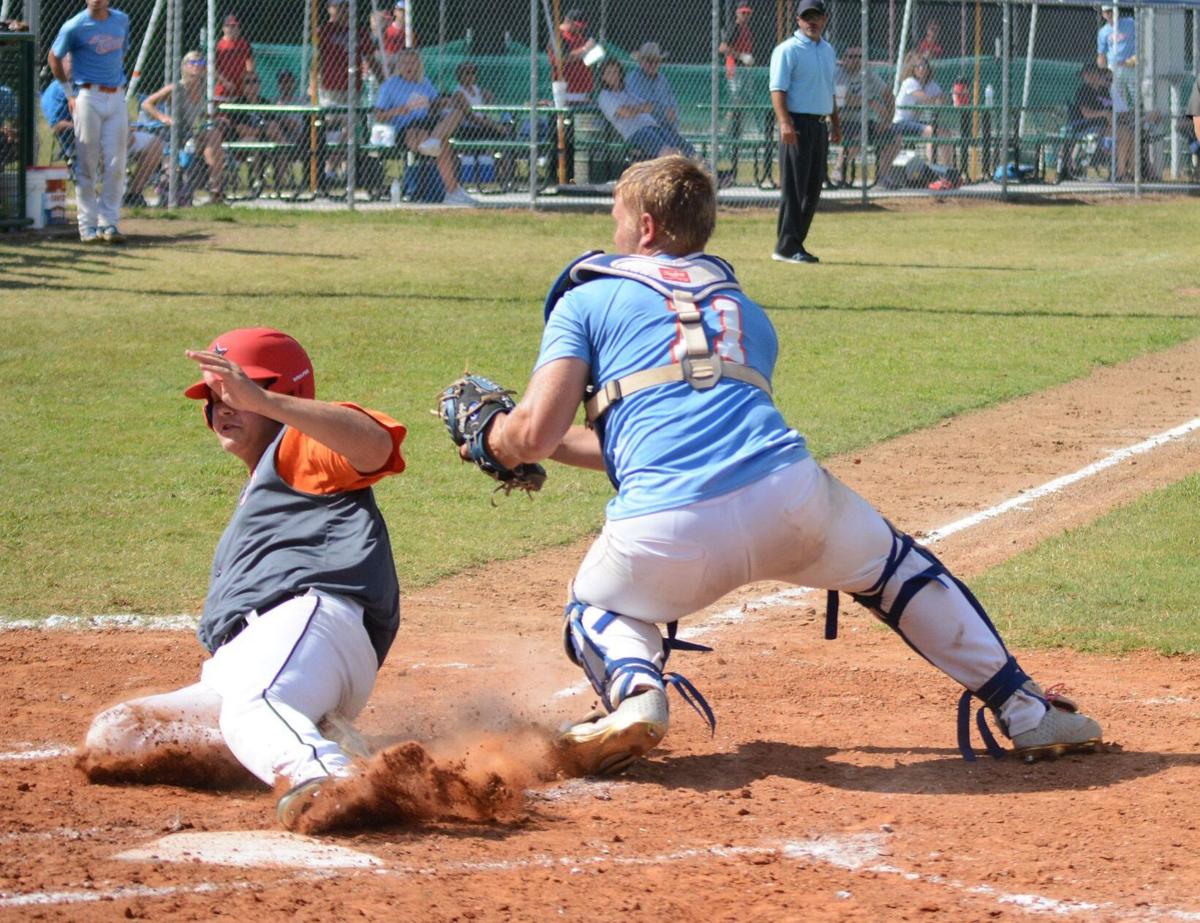 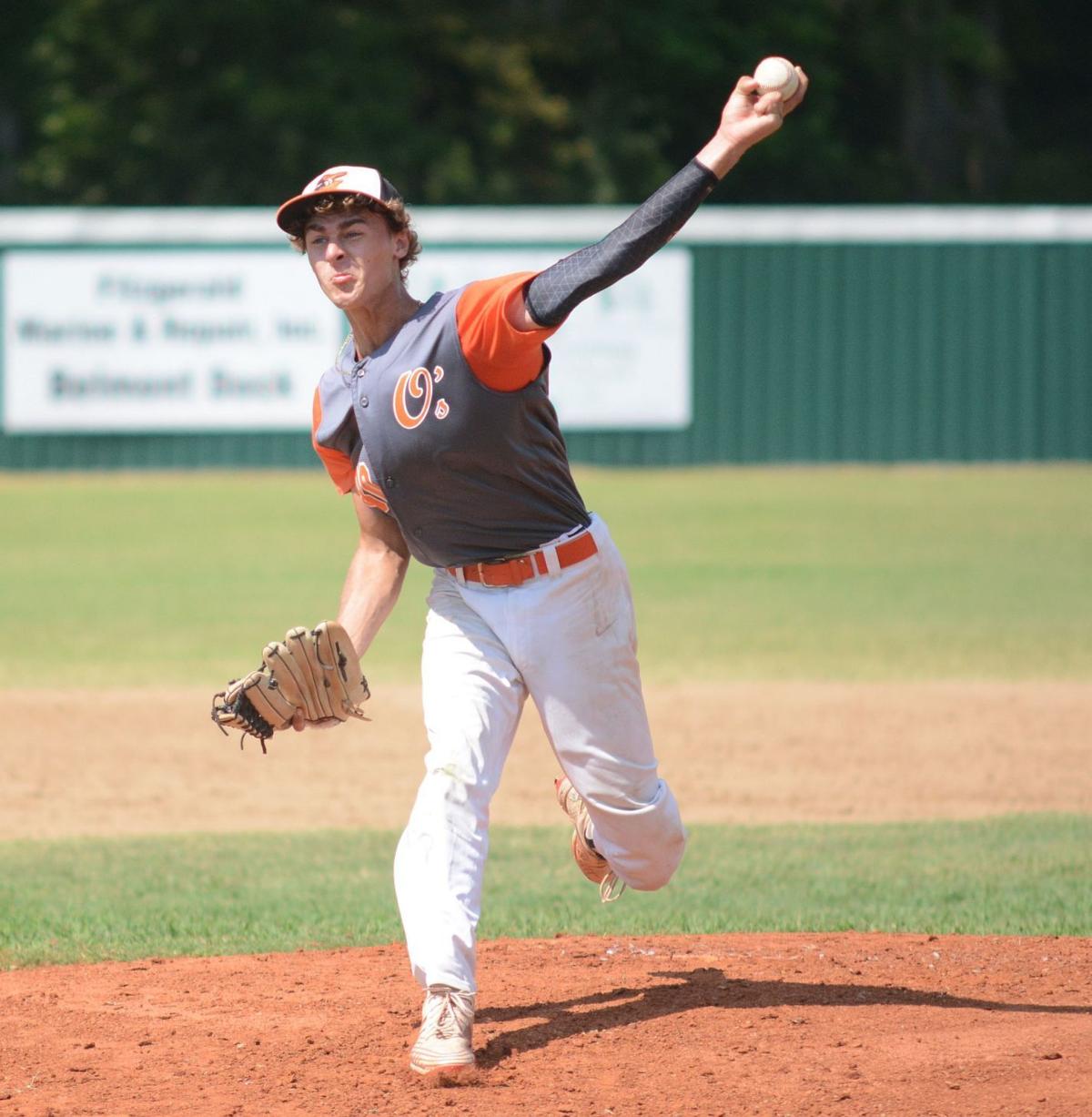 Mineral Area Orioles pitcher Cody Ziegelmeyer throws during the first inning of a Babe Ruth League 19U state tournament game against the SE Tropics on Thursday in Charleston, Mo.

CHARLESTON, Mo. – With 11 teams entered in this year’s double-elimination Babe Ruth League 19U state tournament, even greater emphasis is placed on staying in the winner’s bracket to preserve pitching.

With that in mind, the Mineral Area Orioles dispatched lefty ace Cody Ziegelmeyer to the mound for their opener, and the reliable workhorse lasted as long as the rules would allow.

The Orioles scored twice in the bottom of the third inning, and Ziegelmeyer held the Southeast Tropics at bay from there for a 3-1 triumph at Hillhouse Park.

Drew Brakefield finished 2-for-2 with a triple, and Blane Worley was likewise 2-for-2 with a sacrifice fly that opened the scoring in the first inning.

The Tropics put their leadoff batter aboard in each of the first five innings, but only converted once as an error turned into an unearned run in the top of the third.

Ziegelmeyer reached his allotted pitch limit against his final batter, and punctuated a complete game five-hitter by zipping a fastball past Drew Dirnberger for his seventh strikeout.

Ziegelmeyer retired nine of his final 10 batters faced, and was helped in the sixth when Reilly Resinger made an excellent running catch in right-center alley.

Another pivotal sequence occurred in that general vicinity of the field, fueling the Orioles’ go-ahead rally after Breakfield singled with one out in the third.

As both men remained down for several seconds, Breakfield crossed the plate to snap a 1-1 tie as Ziegelmeyer motored into third with an unusual RBI triple.

Resinger followed with a sacrifice fly for insurance as courtesy runner Tyler Hampton narrowly slid past the waiting catcher on a strong throw.

Mineral Area wasted an opportunity to inflict further damage in the frame. Worley doubled and stole third before Brey Turner walked, but courtesy runner Coltin Wilkerson was caught stealing without attempting to slide for the third out.

Ziegelmeyer made the two-run advantage stand, however, as the Tropics squandered leadoff singles by J.D. McCord in the fourth and Ty Johnson in the fifth.

Tropics reliever Chase Dembowski pitched 3 1/3 scoreless innings, inducing a double play in the home half of the fourth after walking Ayden Morgan and winning a 10-pitch battle with Connor Sullivan.

Starter Kaden Hargrove fanned three straight batters in the second, but fell behind 1-0 after Resinger served his first delivery of the game through the middle and advanced to third on a stolen base and throwing error.

The Orioles, who will face Festus on Saturday morning, caught a massive break in the second when Drew Glueck was called out with the tying run at third despite beating Worley’s throw deep in from the hole.

Worley and Turner were stranded after stroking consecutive one-out singles in the sixth.

Turner made a smooth play from behind the plate in the second, fielding a bunt and spinning to throw out the batter.

Fowler provided an RBI single for the Tropics.

Mineral Area Orioles pitcher Cody Ziegelmeyer throws during the first inning of a Babe Ruth League 19U state tournament game against the SE Tropics on Thursday in Charleston, Mo.