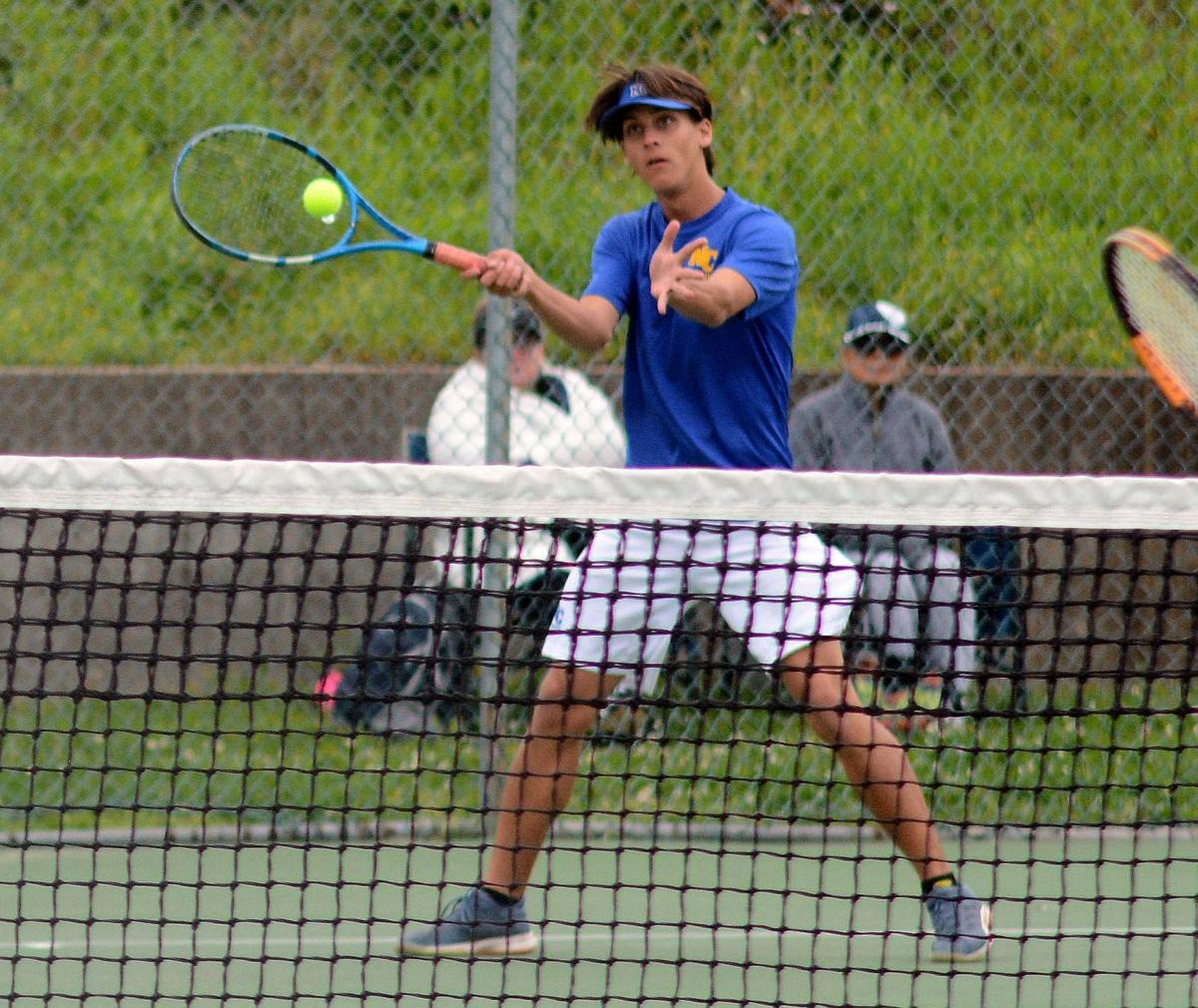 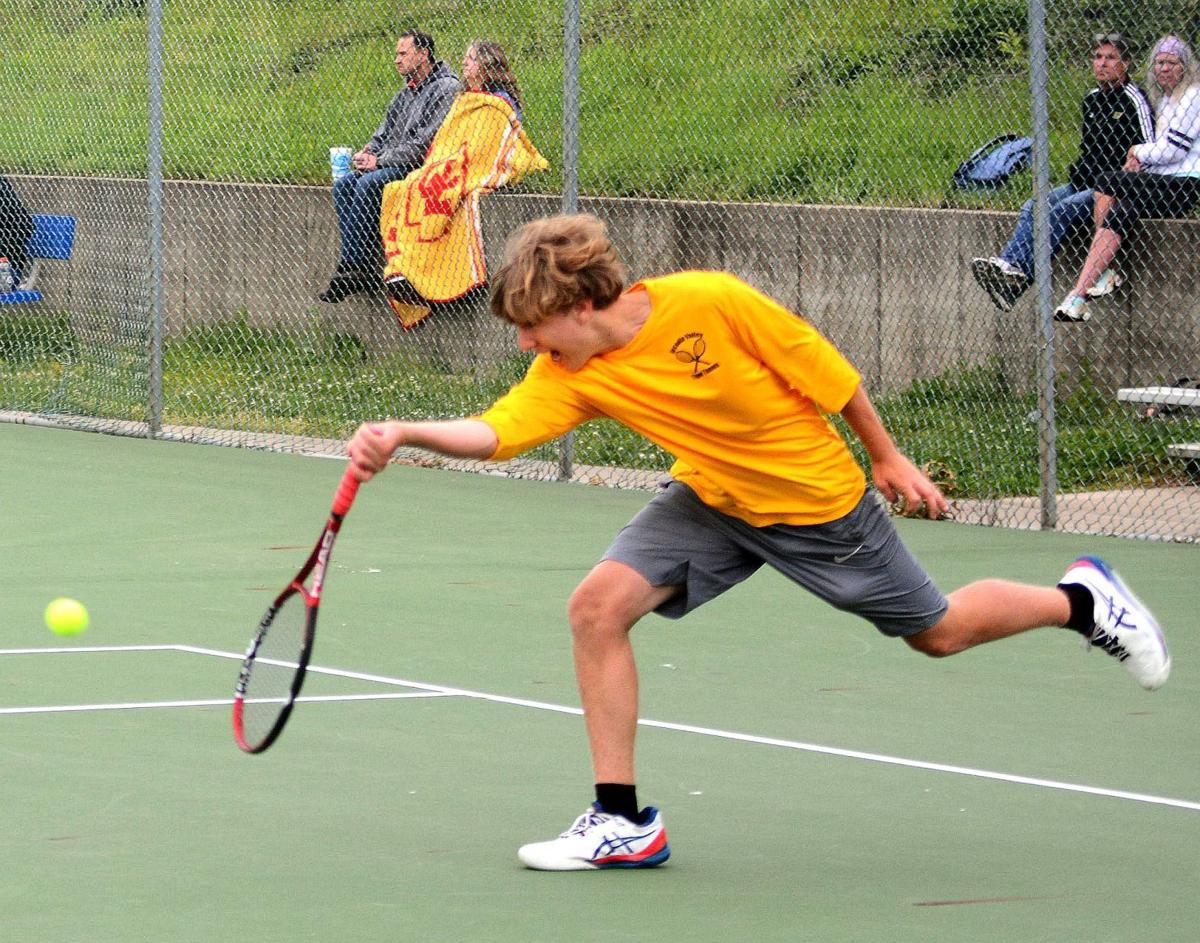 Arcadia Valley senior River Blount hits a charging return for a winner during No. 1 singles action against North County in a Class 1, District 1 tennis match on Tuesday in Bonne Terre. 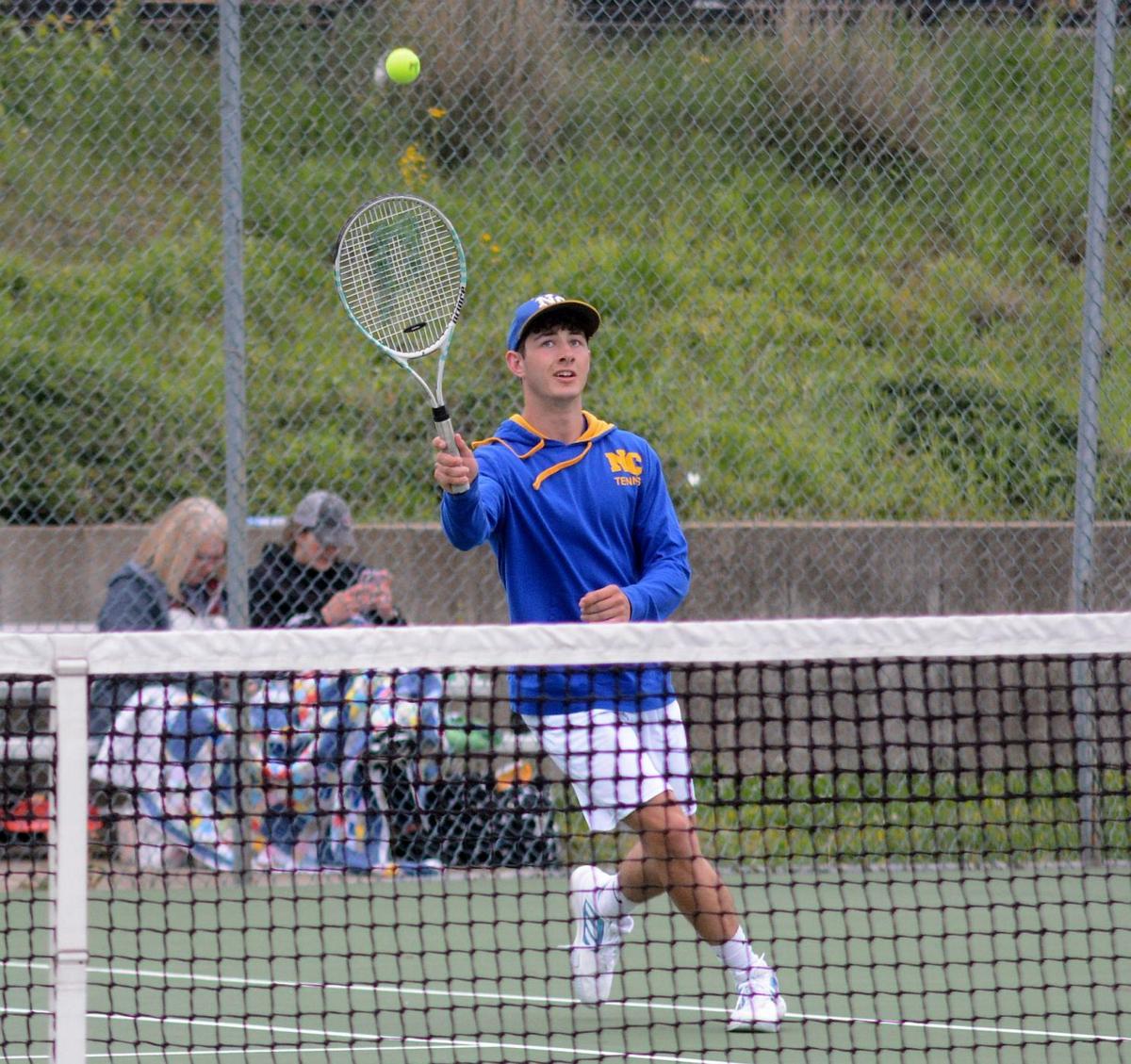 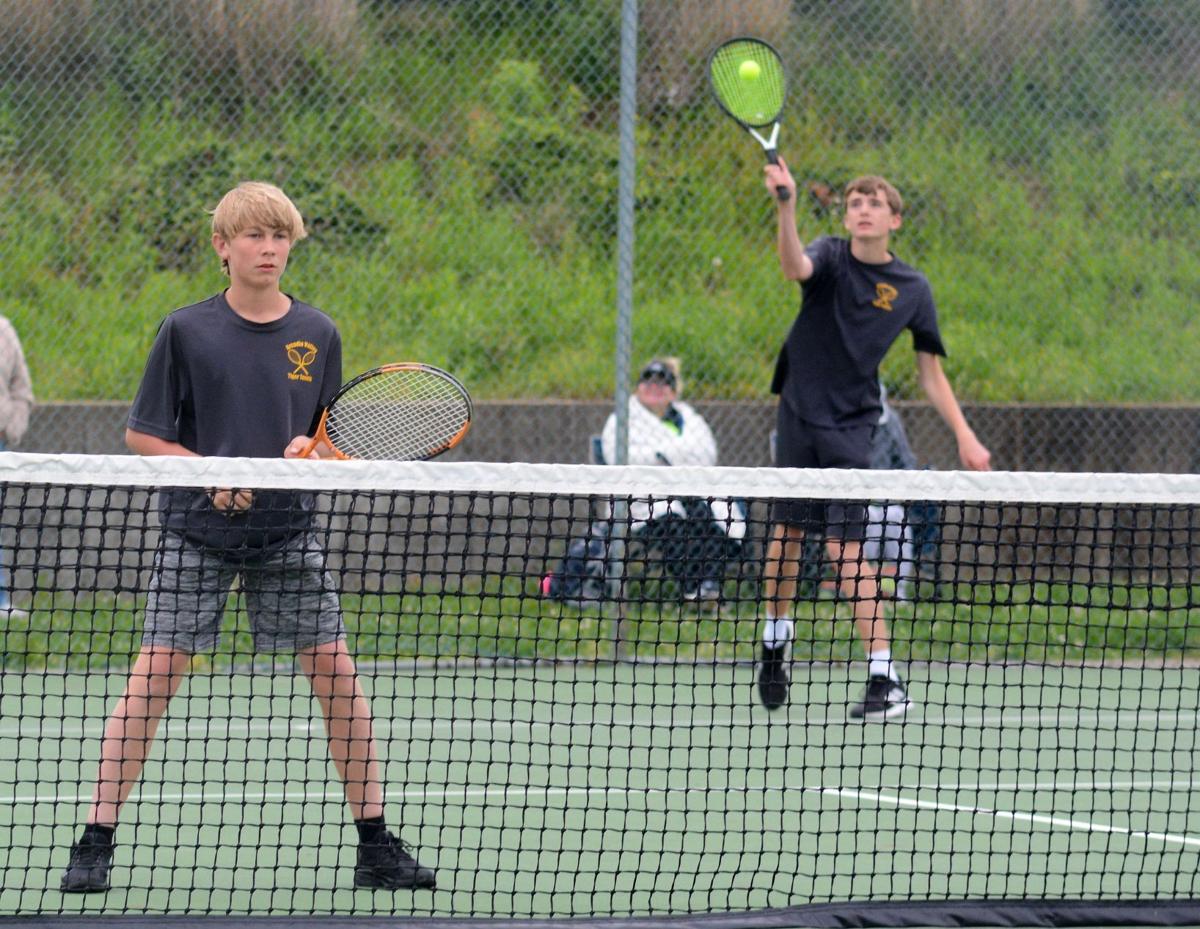 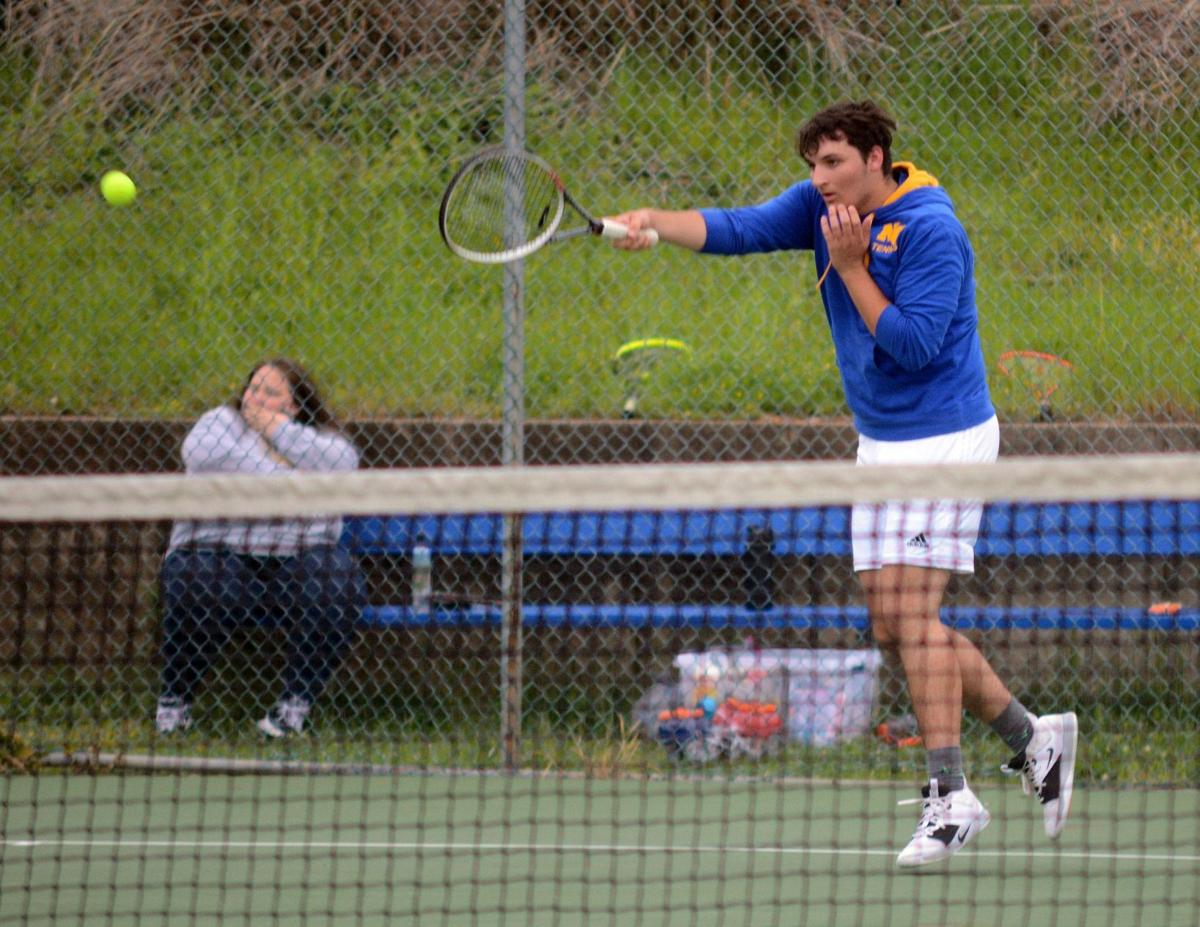 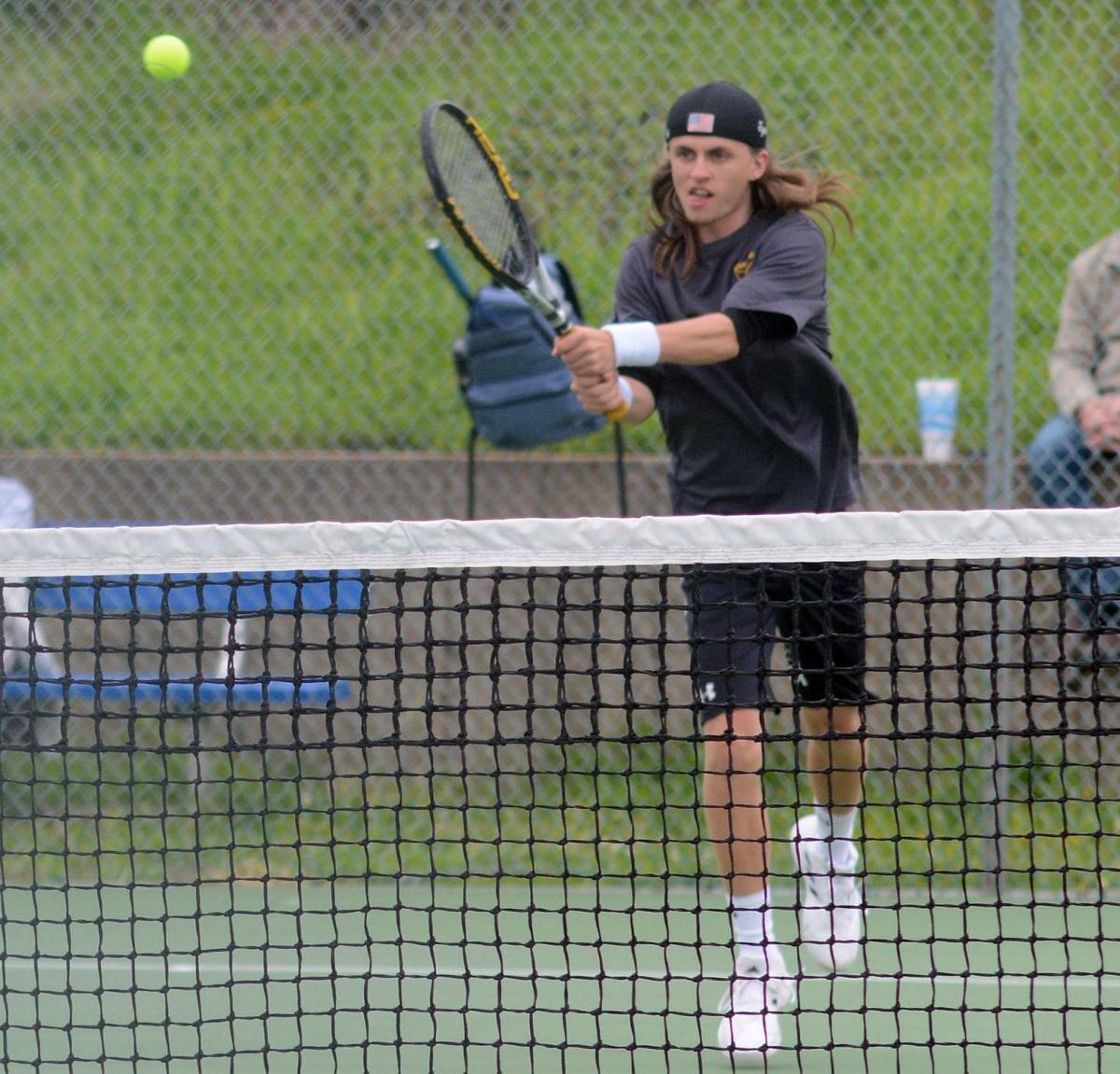 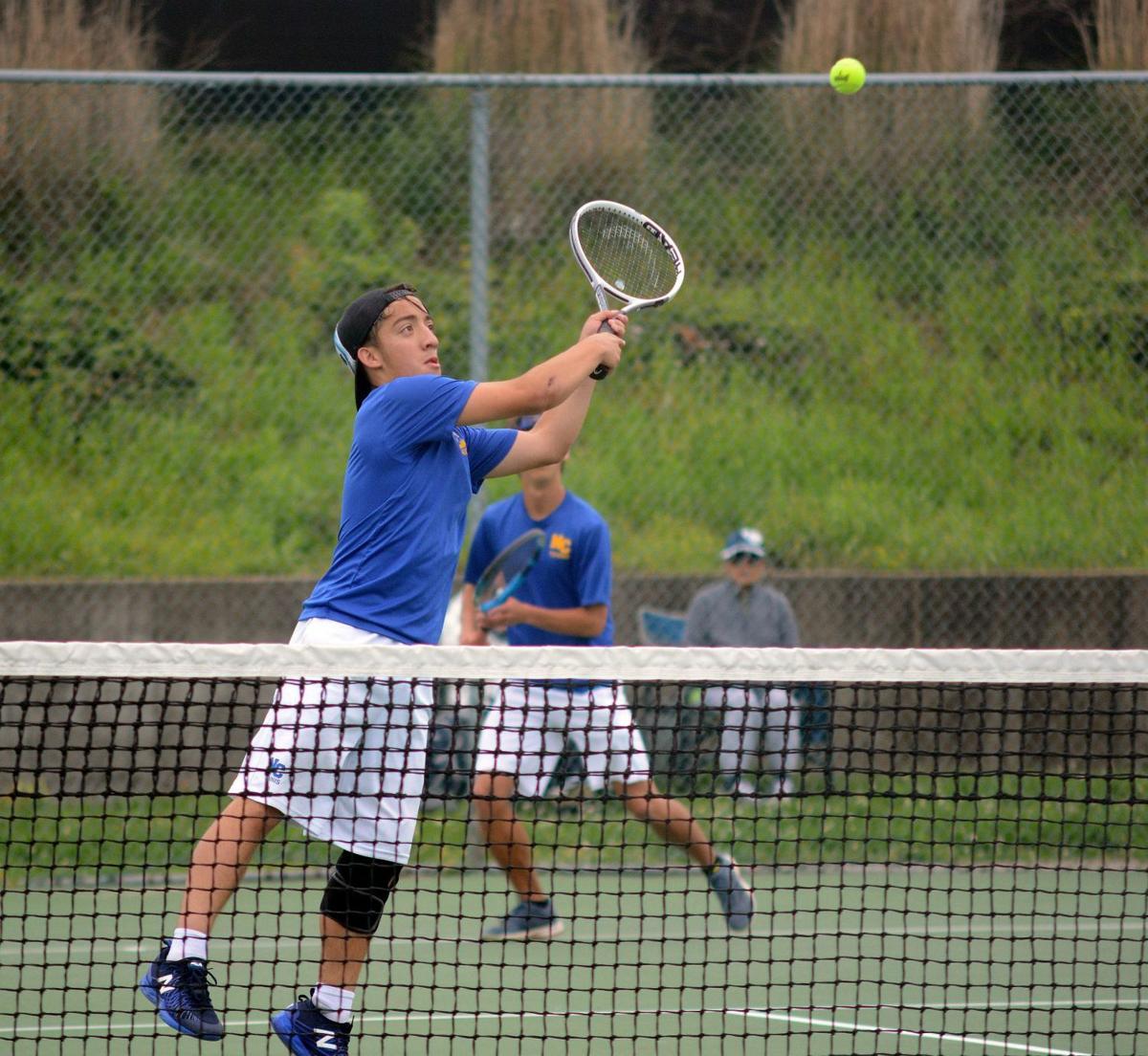 Kater closed out a No. 1 singles showdown with fellow state sectional qualifier River Blount 7-5, 6-2, and the Raiders advanced with a collective 5-1 victory at home.

While the two lower-ranked doubles contests turned lopsided, the momentum permanently shifted toward the Raiders midway through the No. 1 battle.

Noah Silvey and Wren Blount notched an early service break, but Peyton Cheek and Kater retaliated for an 8-3 result after claiming the last five games in succession.

River Blount and Isaiah Eudy cruised to an 8-0 shutout for Arcadia Valley (4-6) at No. 2 doubles. But Garrett Hayes paired with Hoffman to roll 8-1 at the No. 3 level to even the overall team score.

Veach stepped into the No. 6 singles slot for North County, as multi-sport athlete Bryan Basinger had a baseball obligation, and quickly dispatched Andrew Edgar 6-0, 6-0.

Blount offered a much tougher challenge for Kater in a rematch after falling to him 6-0, 6-1 during the individual district final. Blount chased down a short return to finish an rapid exchange of volleys, then charged in furiously to flick a return past Kater for a winner.

The opponents traded service breaks early on, but Kater topped a couple of long rallies to eventually close out an opening set that was square at 5-5.

Kater took control from there by hitting deeper returns and finding more corners to push Blount away from the net. A running forehand missed wide on match point.

Three singles matches were not completed once the Raiders clinched. Wren Blount was interrupted after building a commanding 6-1, 4-0 cushion over Andrew Kay.

Hayes had a one-set advantage over Eudy favoring North County, and Cheek was ahead of Silvy 5-3 despite being broken just before action was halted.

Arcadia Valley senior River Blount hits a charging return for a winner during No. 1 singles action against North County in a Class 1, District 1 tennis match on Tuesday in Bonne Terre.