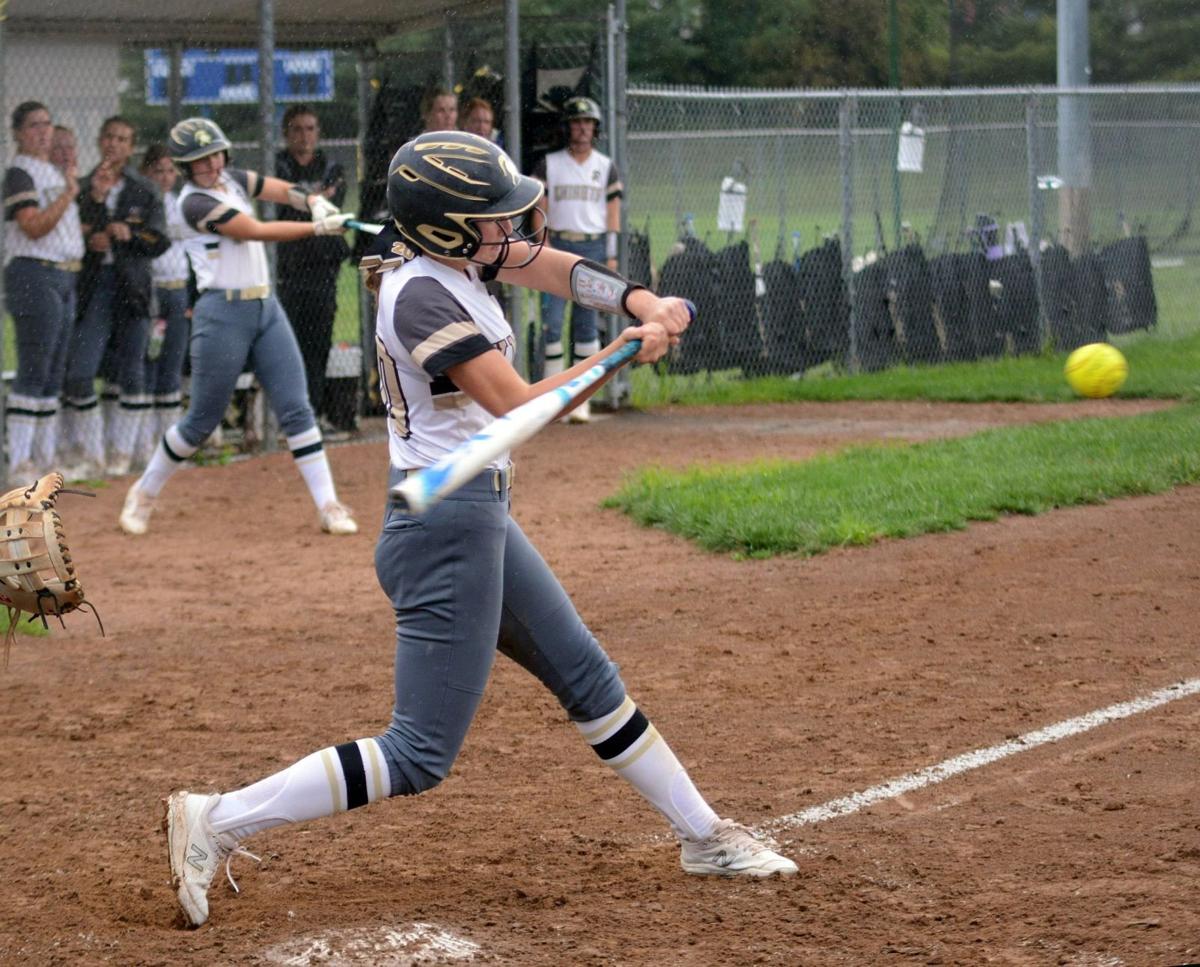 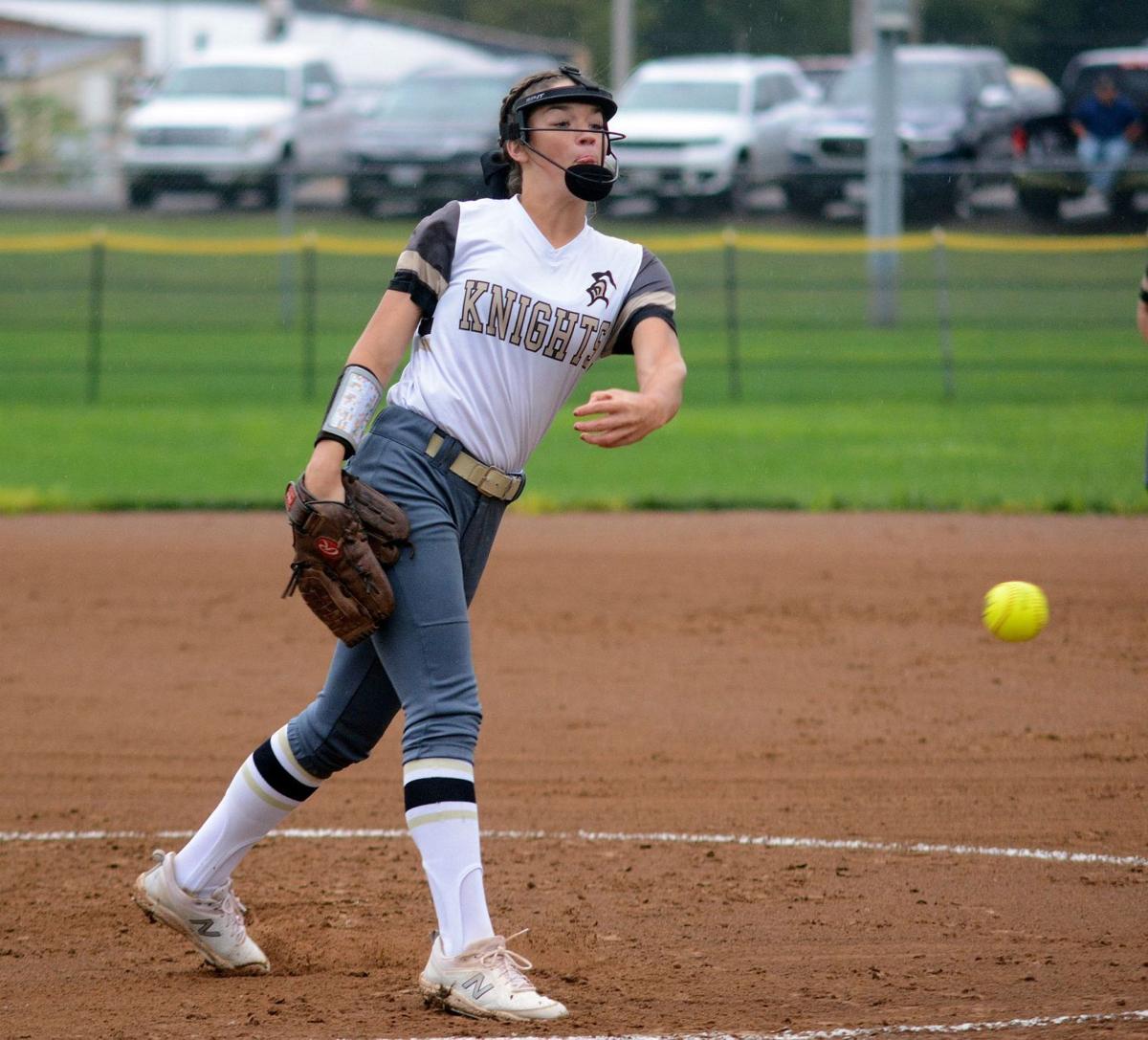 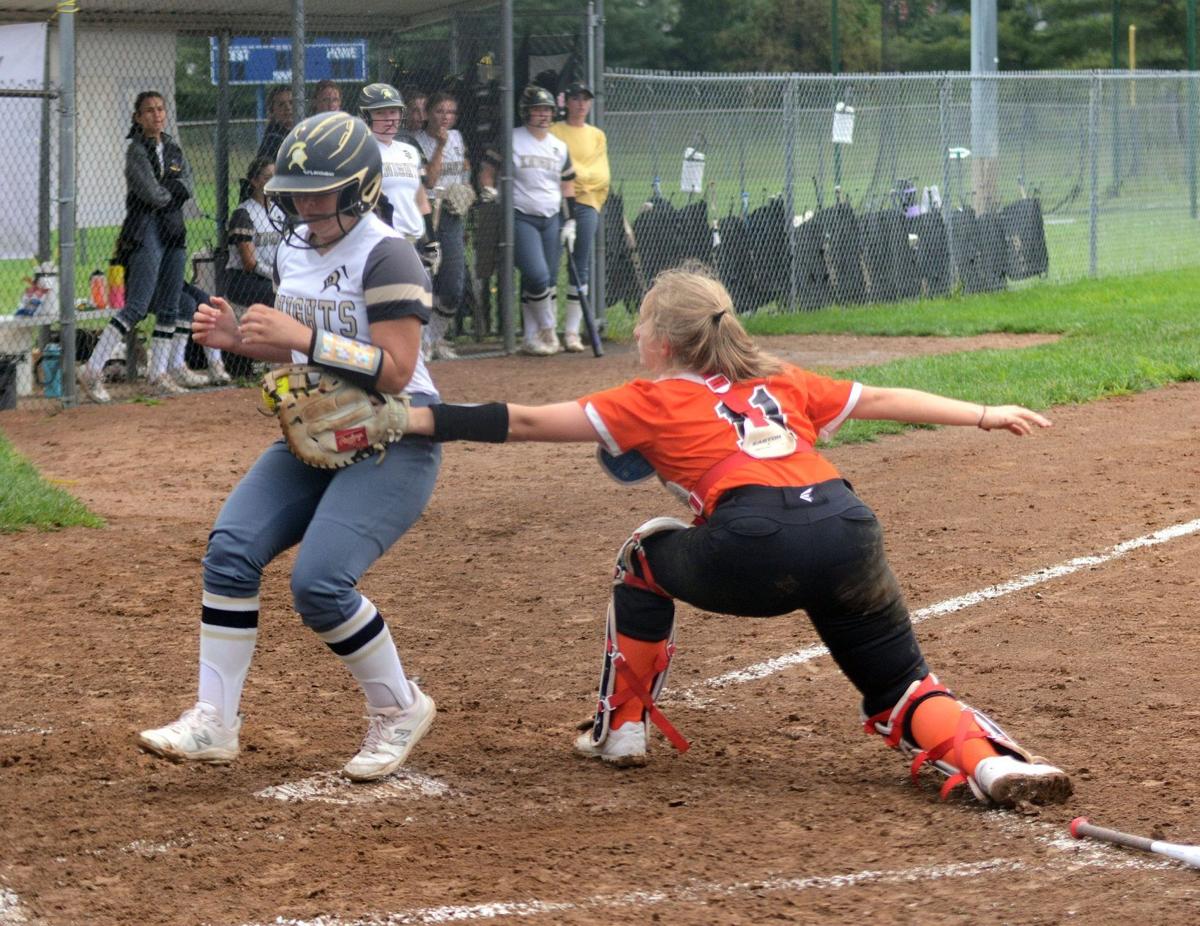 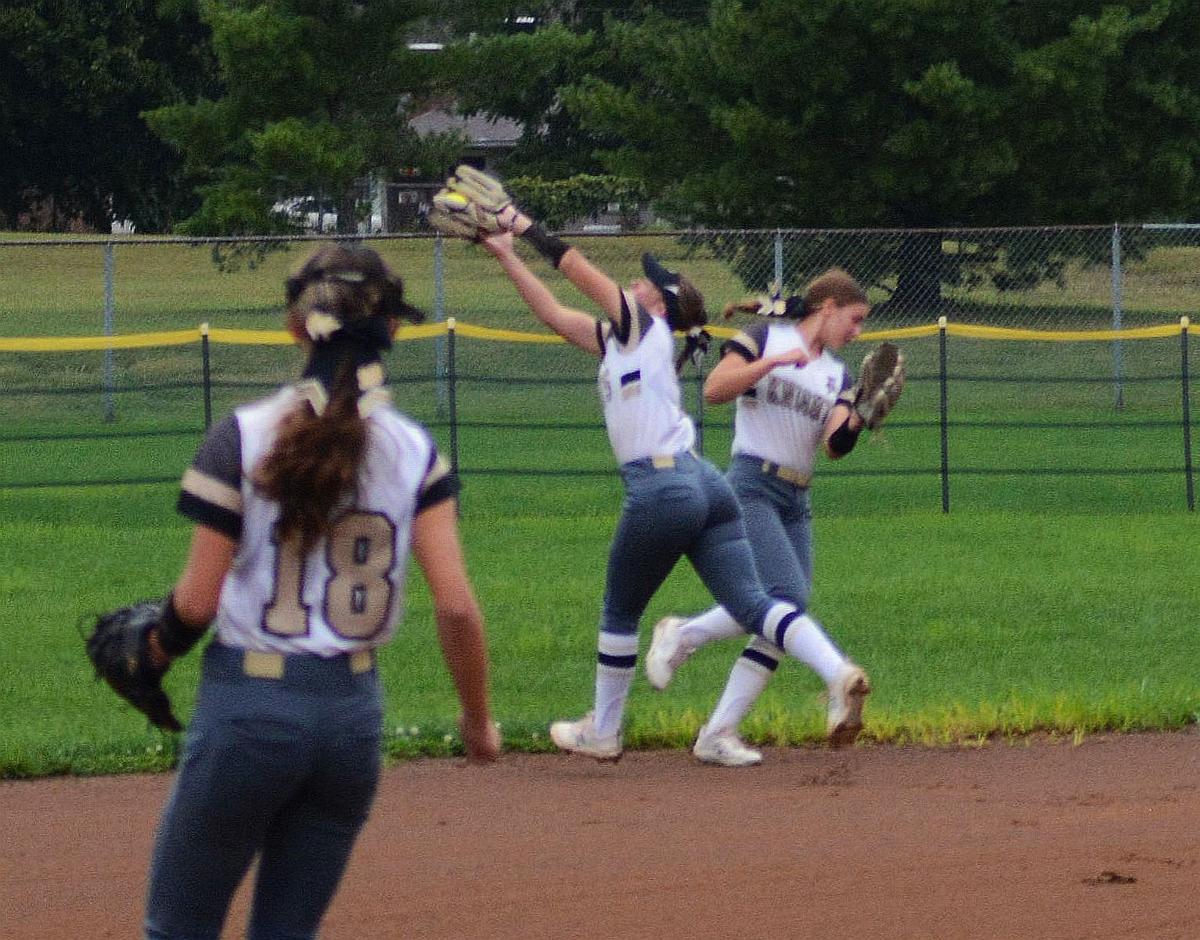 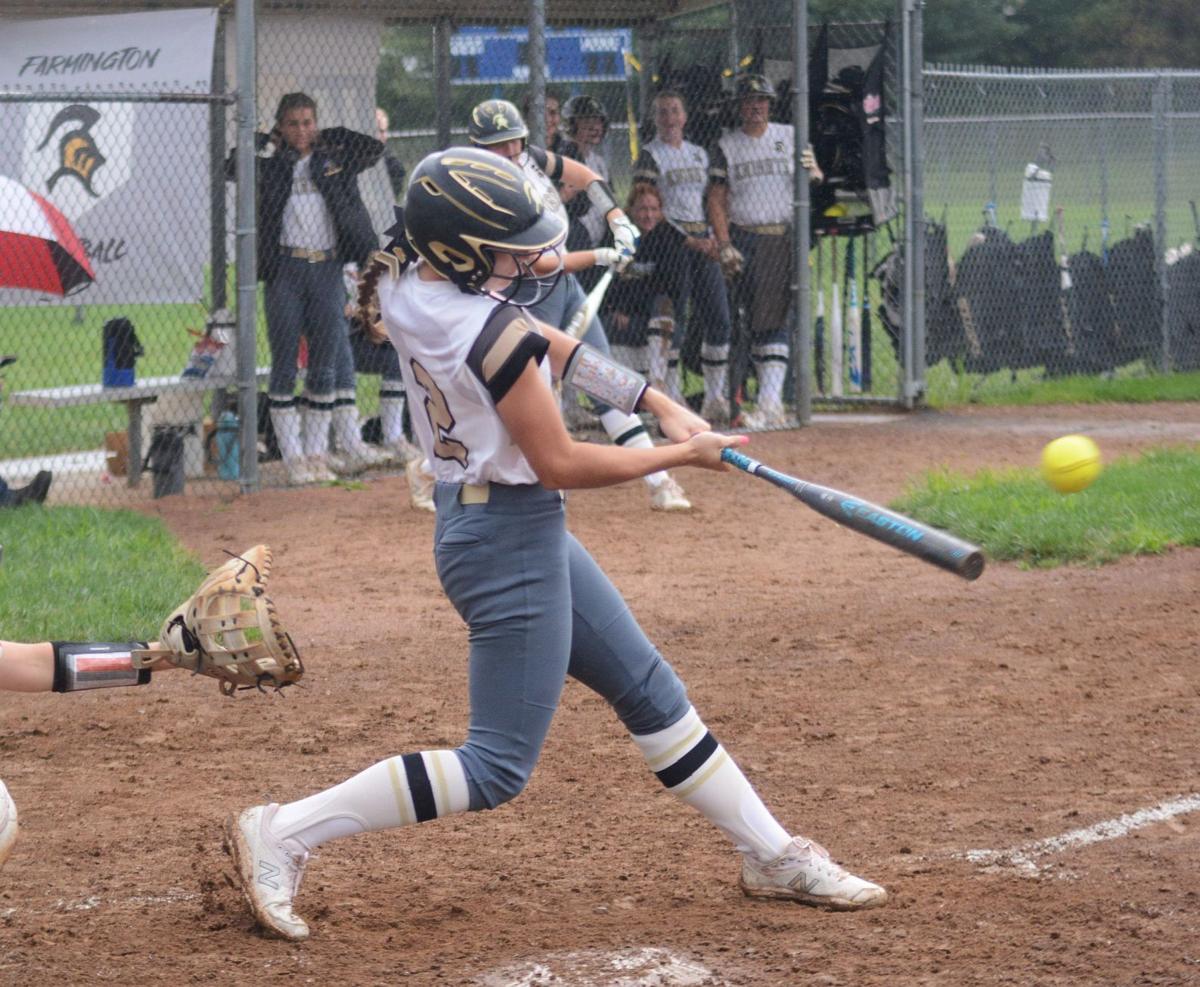 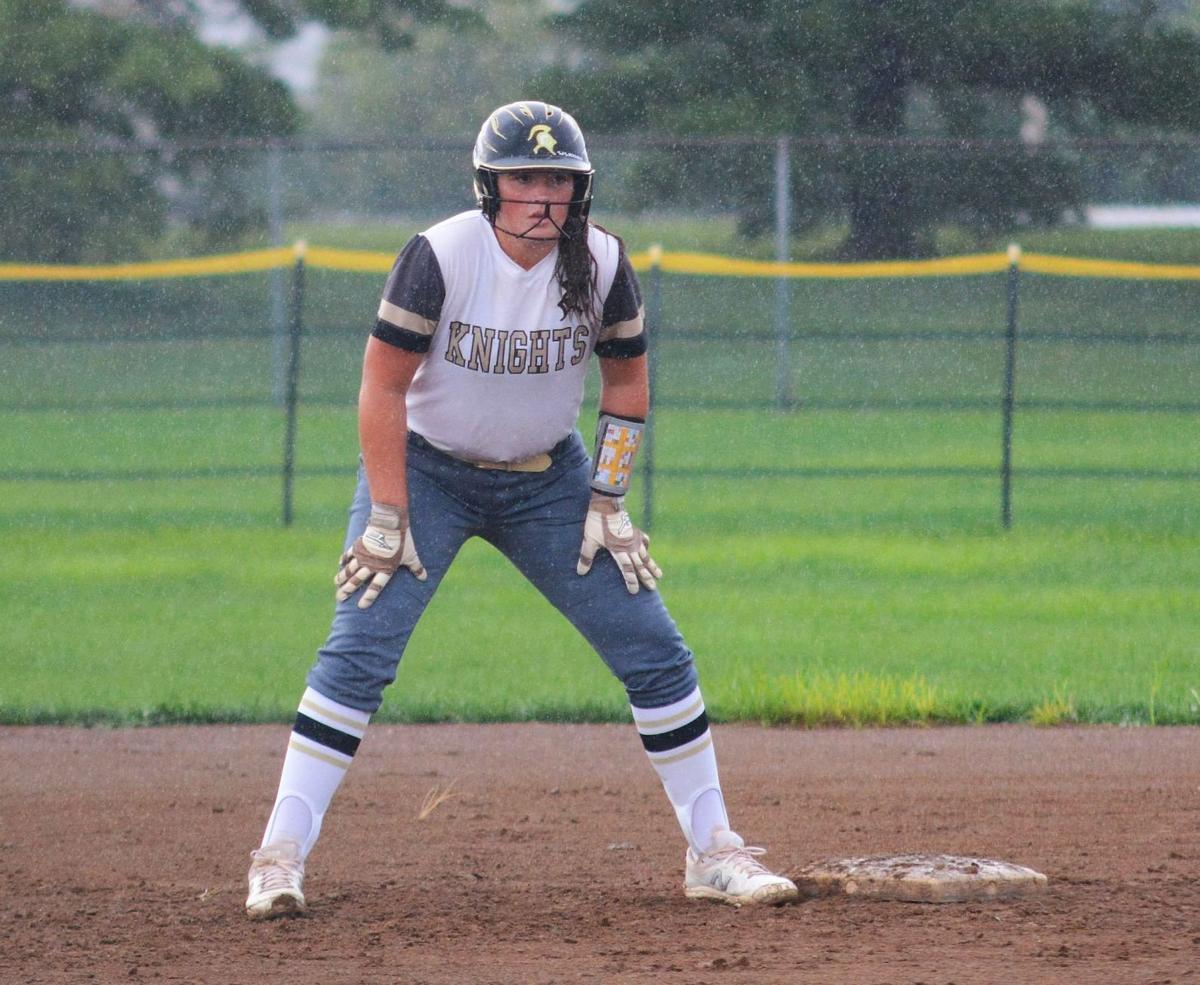 Farmington sophomore Shelby Bowling stands at second base as rain falls during the second inning against Cape Central on Tuesday in Farmington.

FARMINGTON – Just one day after equaling its single-game high with 21 runs against Poplar Bluff, the Farmington softball needed just two innings to establish a new standard.

Four errors by the Cape Central defense contributed to a 15-run outburst as light rain fell throughout the second frame, and the Knights dominated 22-1 at home.

Jayce Jarvis immediately validated her move to the leadoff spot in the order by finishing a perfect 4-for-4 with two doubles and six RBI for Farmington (17-6, 4-1).

The sophomore left fielder made a tremendous sliding catch on a sinking liner in the second inning, and earlier handed the Knights a 7-0 advantage with a bases-clearing double to left-center.

Courtney Swink pitched all three innings for the win, allowing two hits and one walk while striking out four. She worked around a dropped fly ball in the first.

Consecutive doubles by Robbins and Davis quickly made it 3-0 against Tigers starter Isabella Pattengill, who issued seven walks over 1 1/3 innings.

Cape Central (7-13, 1-4) prolonged the second frame for Pattengill and a reliever with a dropped toss to first and collision between two outfielders. Another run scored during a force play at home when the catcher stood a couple of feet from the plate.

Elly Robbins lined a two-run single for a 10-0 separation after McKennah Wallace drew a bases-loaded walk on four pitches. Alayna Resinger notched two RBI on a sacrifice fly and subsequent single that made it 19-0.

The Knights remain one game back in the SEMO Conference title chase, but could share first place if Jackson loses to Notre Dame on Thursday.

Cape Central snapped the shutout bid on Pattengill’s two-out single to right that followed a sacrifice bunt in the top of the third.

Ki Bogan bunted for her team’s initial hit, and eventually stole third on a delayed break.

BONNE TERRE – North County erased an early 5-0 deficit at home, but could not overcome a rocky defensive performance on Tuesday evening.

Perryville capitalized on eight errors by the Lady Raiders, including a dropped throw to first base that preceded three two-out runs in the eighth inning to prevail 9-6.

Kylee Stortz concluded the game with her 14th strikeout against no walks, and secured the win despite allowing 14 hits. Only two of the six runs scored against her were earned.

Perryville (8-10) received three hits each offensively from Carlie Holdman and Stortz, and broke open a scoreless game with five tallies in the top of the third inning.

North County (9-5) answered with four in the fifth, and executed several bunts to eventually pull even at 6-6 in the seventh before stranding the winning run at third base.

Sammy Waller pitched the duration in defeat, yielding 12 hits and one walk while striking out seven. All nine runs charged against her were unearned.

Waller also paced the hitting attack by going 3-for-5 overall. Kylie Moebes tripled for the Lady Raiders while equaling Gracie Wigger at 2-for-4.

North County had won six of its previous seven games.

STE. GENEVIEVE – The Fredericktown volleyball team faced its toughest test of the season to date, and watched its 15-match unbeaten streak conclude in convincing fashion.

Ella Bertram registered 10 kills with three solo blocks among seven overall, and Riley Brown served four aces out of a team-high 15 points for the Lady Warriors.

Valle Catholic (12-2-2) was fortified by five kills each from Macy Wolk and Makayla Joggerst, who dished out eight assists. Mia Weiler finished with eight digs, 14 serve receptions and nine points.

Braylee Montgomery added two aces, and Winch made two scoring blocks for North County (12-1-1), which hosts Valle Catholic for a showdown on Thursday.

Tessa Grass served five aces while also connecting for eight kills, and Arie Taylor distributed 21 assists as the host Dragons moved back above the .500 mark overall.

PARK HILLS – Jefferson defeated its fourth opponent from the MAAA conference this season with a 25-19, 25-17, 25-17 sweep of Central on Tuesday evening.

FARMINGTON – Ste. Genevieve finished runner-up and host Farmington was fourth during a quad match in rainy conditions at Crown Pointe on Tuesday.

Kaydi Rhodes carded three birdies while shooting a 1-under-par 35 along the front nine, leading Jackson to a dominant victory and collective 150.

Ava Meyer paced Ste. Genevieve with 54. Etta Heller and Lani Yamnitz each scored 55, and Regaen Naeger added 56 for a team total of 220.

Cape Central edged Farmington for third by a 247-249 margin. Chloe Allen shot 55 and Emma Burgess tallied 59 for the Knights.

ST. LOUIS – Potosi collectively surrendered only three games while coasting to a 9-0 tennis result against Bayless on Tuesday.

Race champion Tegan Bishop (21:24) of Perryville was the only competitor crossing ahead of Griffard (22:03). Lauren Hartman (22:16) of Crystal City was third.

Valle Catholic senior Camryn Basler (22:52) was two spots behind her teammate in fourth, and Katie Kertz (24:04) ended up 13th. Awards were presented to the top 20 in each division.

A turnover near midfield by the visiting Dragons sparked an immediate counter attack, and Charlie Houser assisted on the golden goal.

CALEDONIA – Regardless of the lineup combination, the West County girls basketball team has shown the ability to establish a formidable post p…

MLB lockout: What you need to know

Farmington sophomore Shelby Bowling stands at second base as rain falls during the second inning against Cape Central on Tuesday in Farmington.