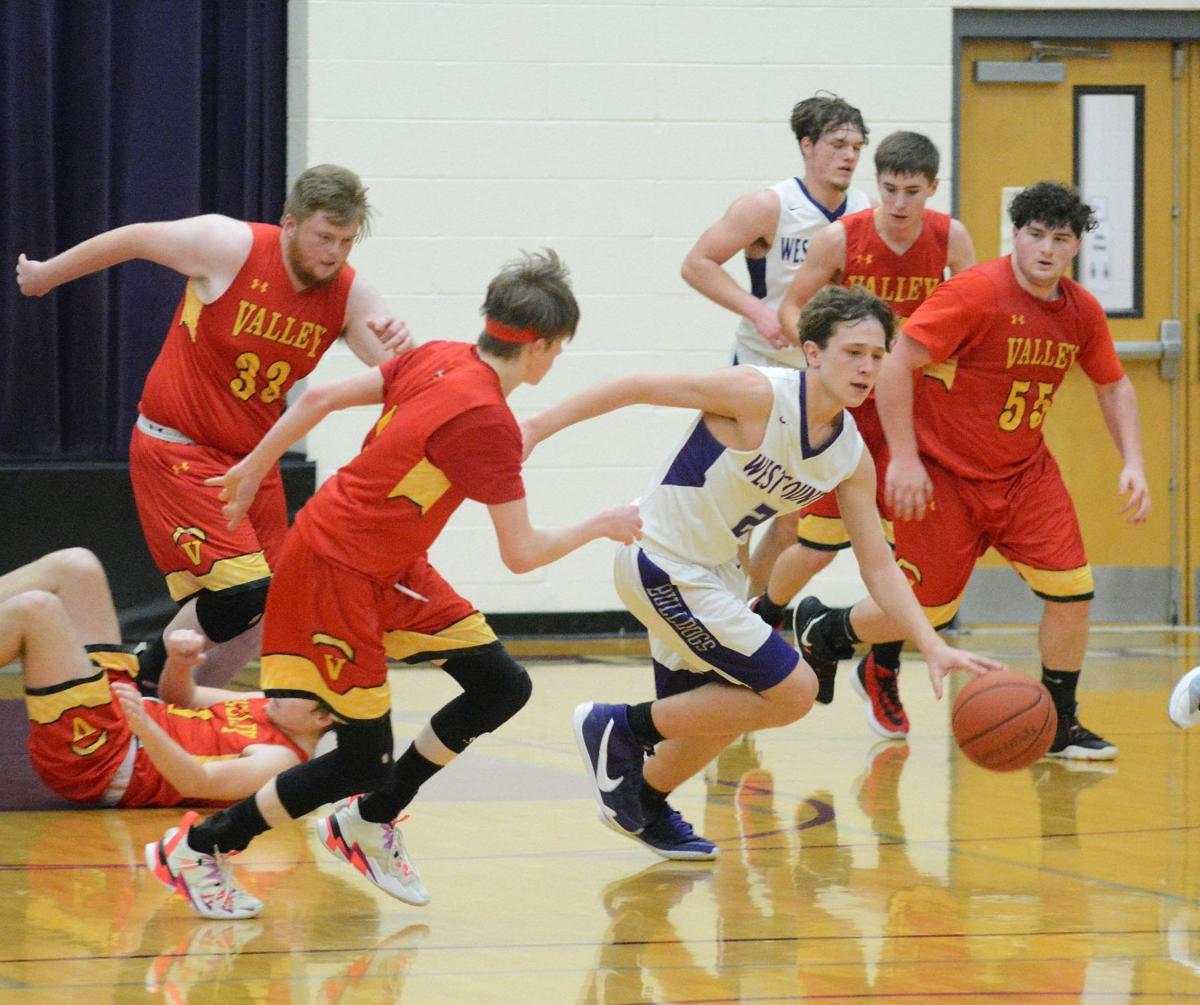 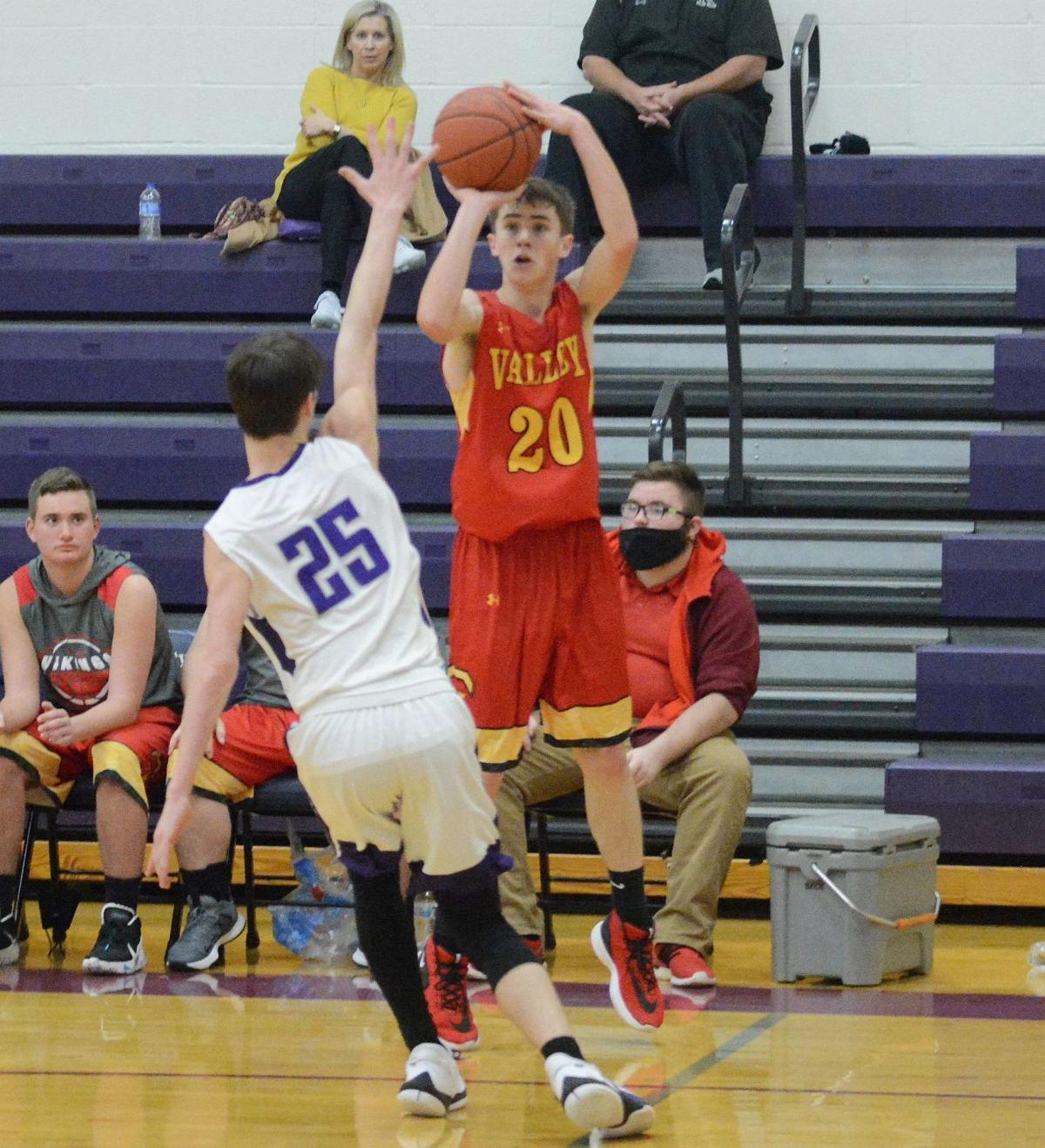 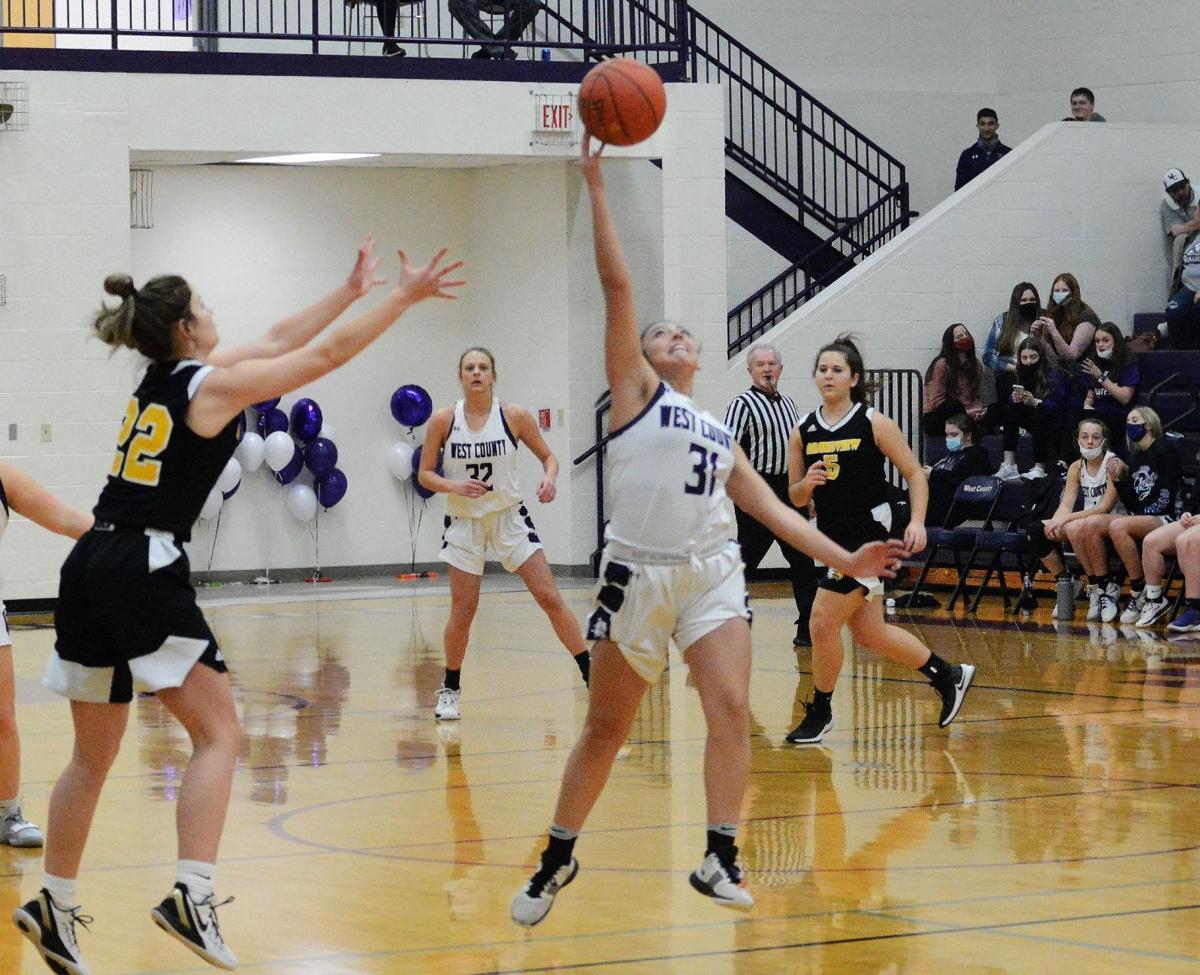 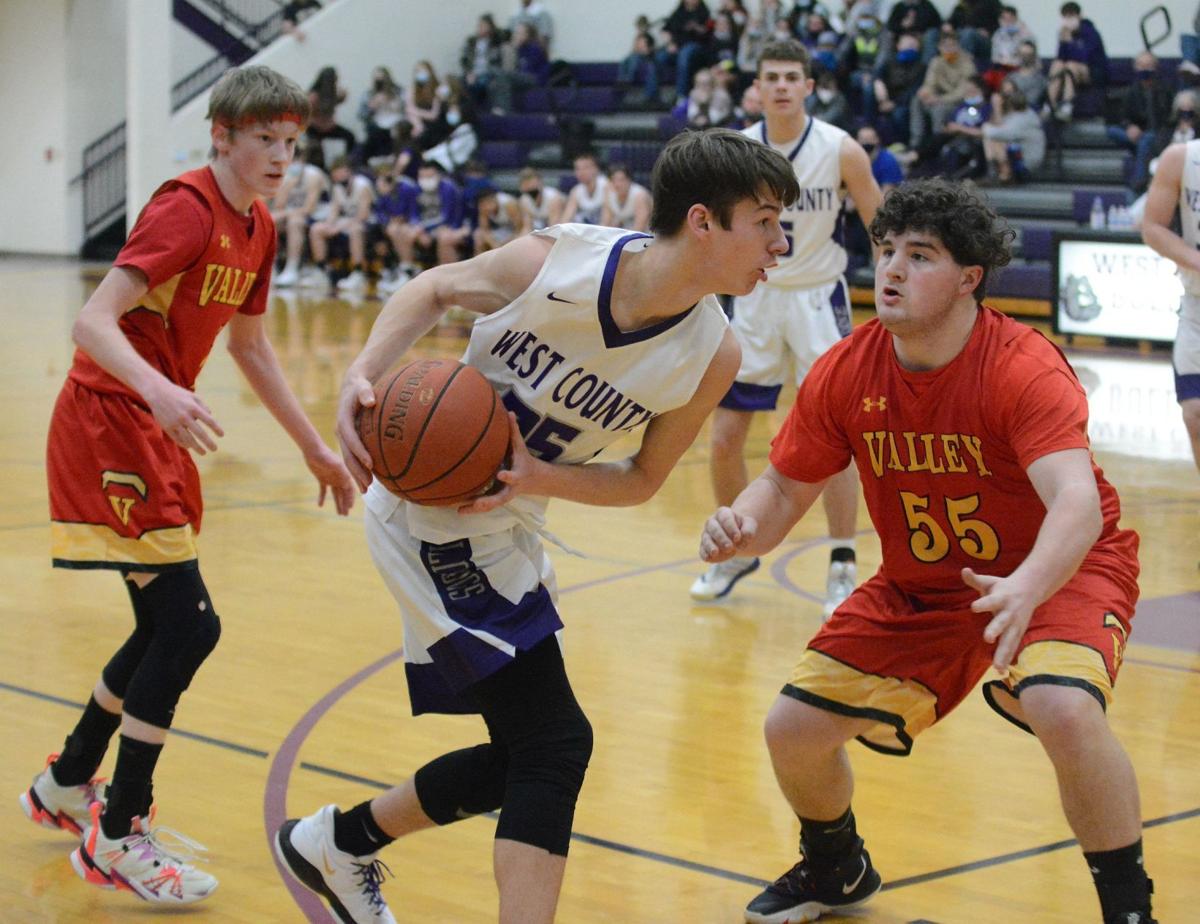 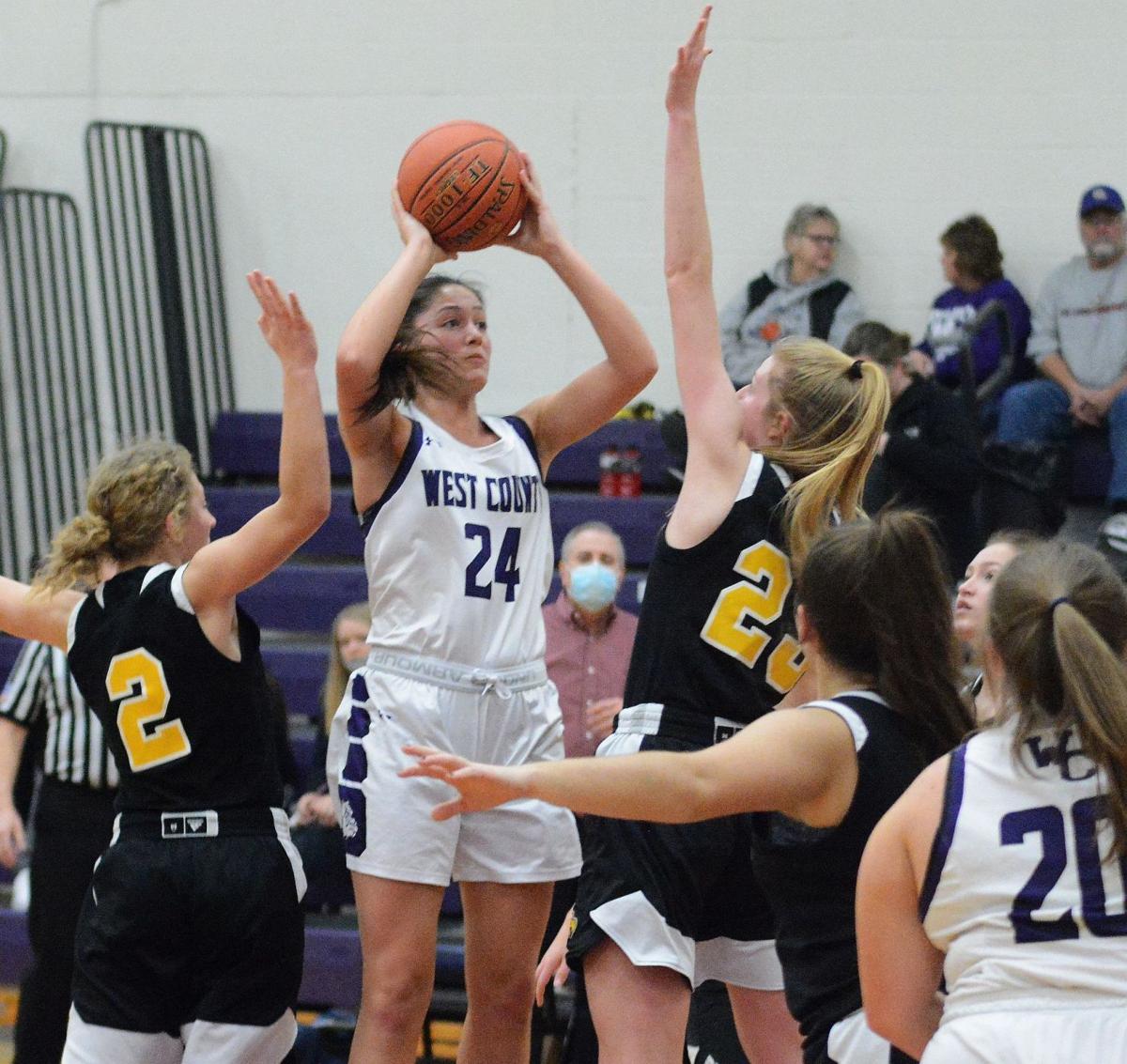 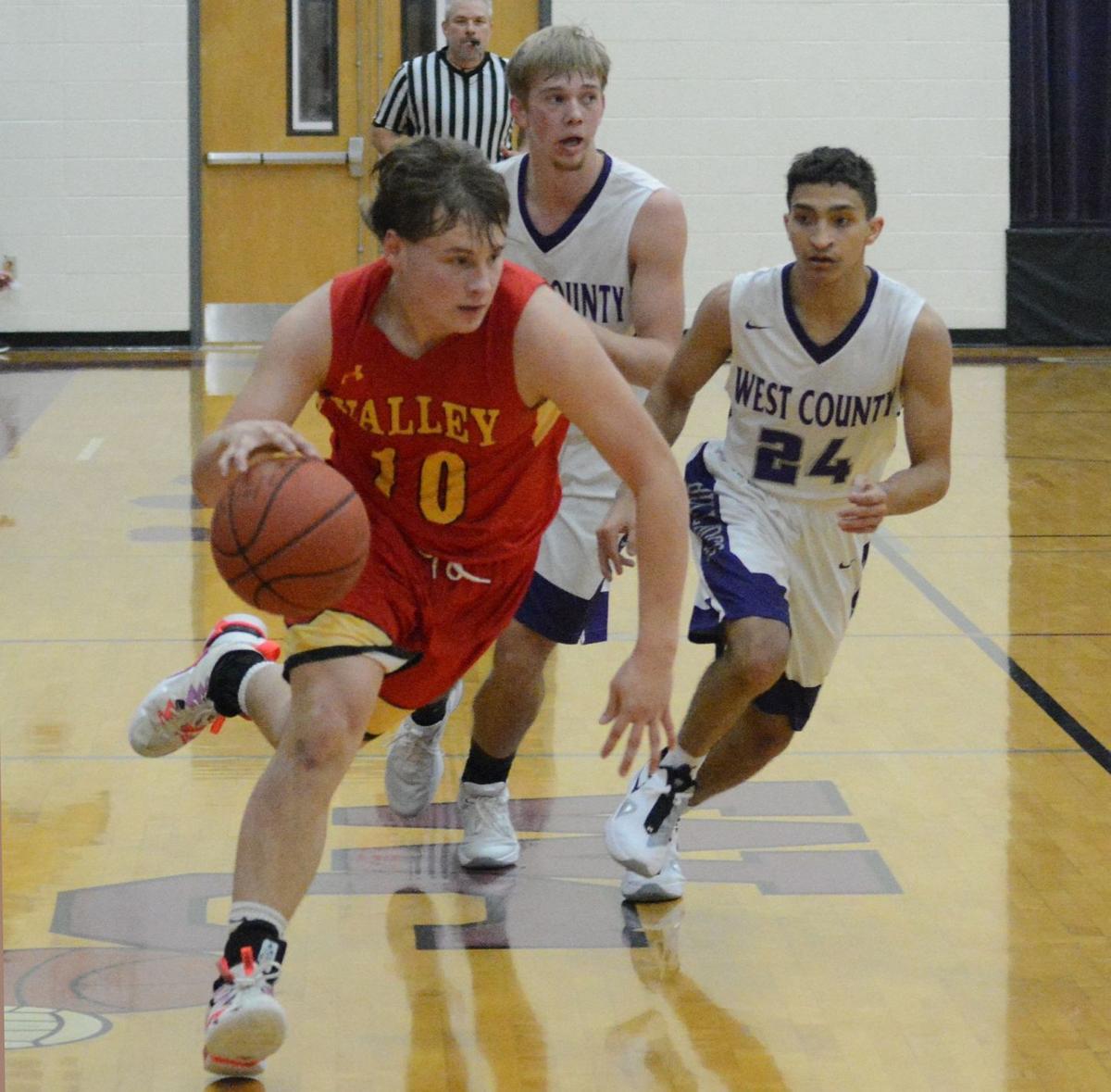 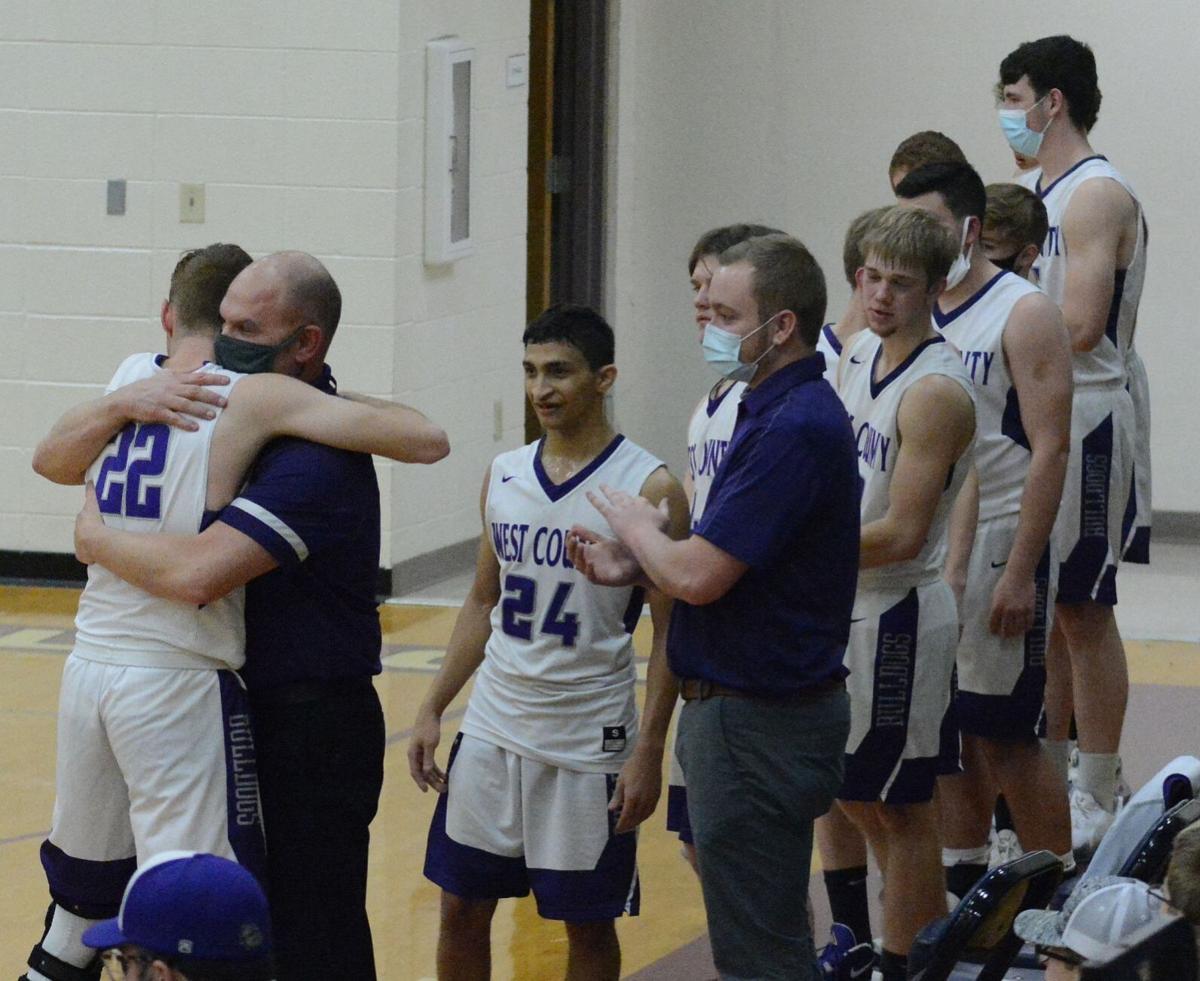 West County senior Grady Masters (22) embraces head coach Chris LaBruyere as teammates stand while heading to the bench in the fourth quarter against Valley on Wednesday night in Leadwood. 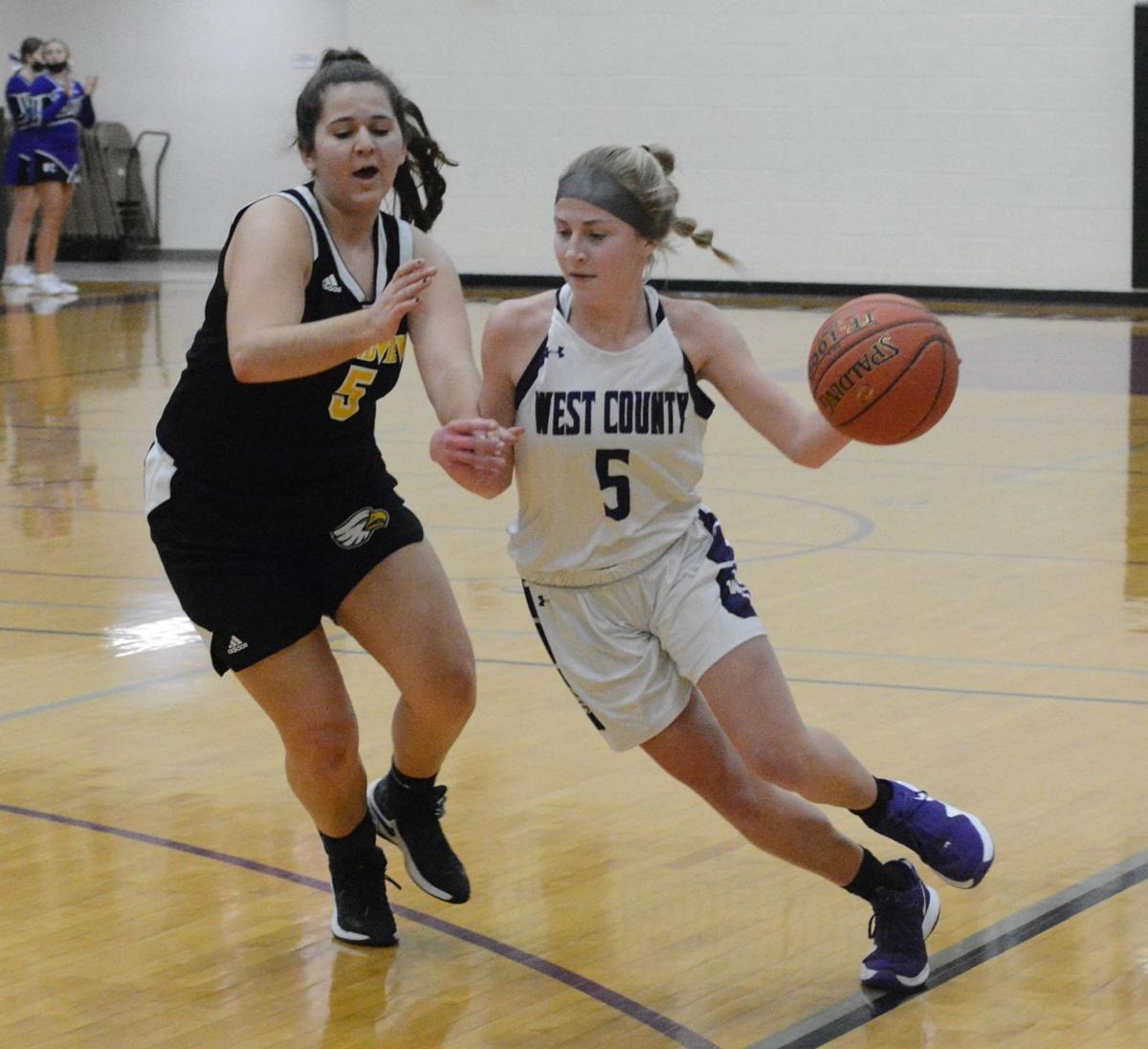 But the Vikings watched an early 14-point advantage wane with each long-range dagger launched by freshman Garrisson Turner, and collectively lost their offensive focus from there.

West County drew a bundle of fouls during a disjointed second half, and celebrated its seniors by ending a seven-game slide with a 59-51 victory.

Turner buried six 3-pointers and scored a game-high 30, despite being blanked in the first quarter, and the Bulldogs forced 24 turnovers while committing just 12.

Valley registered only four made field goals after halftime, including three 3-pointers from Maxwell, and was defeated by West County for a 36th consecutive meeting.

The senior forward was given the start in his second appearance since undergoing a second procedure to address a torn meniscus just before Christmas.

His evening was highlighted by a steal and jumper off a return pass at 36-34 that put the Bulldogs ahead for the first time since 2-0, and stamped by hugs from head coach Chris LaBruyere and teammates upon exiting the action.

Maxwell coaxed another lead change with an ensuing 3-pointer, and scored 29 points as the primary option for the Vikings, who generated numerous second shots along the boards.

But the visitors conversely failed to box out at the opposite goal as the Bulldogs gathered several of their own missed free throws to carry a 45-38 lead into the fourth quarter.

Menzel curbed some Valley momentum with a steal and score through contact after Keegan Boyer hit a cutting layup and two subsequent free throws.

Masters added a crucial putback with four minutes left after a Maxwell triple trimmed the deficit to 50-47, and West County pulled away despite going 20-of-46 from the line.

Valley (7-4, 0-1) brought high energy from the outset, and surrendered one field goal to West County over the first 10 minutes while building a 19-5 lead on back-to-back Maxwell threes.

But its aggression backfired in the form of several rushed miscues once the Bulldogs adjusted their defensive game plan and actively crowded the paint.

Turner ignited the Bulldogs with 16 points over a scalding 5 ½-minute stretch, draining multiple shots from well beyond NBA 3-point distance.

He also raced from his side of midcourt for a layup after making a steal, and Noah Winch added a stellar transition finish while switching hands in traffic. The halftime deficit was reduced to 31-26.

Shawn Presley and Boyer each grabbed 10 rebounds, and Maxwell corralled nine more as the Vikings endured their fourth loss in five contests after starting the season 6-0.

Alivia Simily netted 12 of her 16 points before halftime, helped by a pair of streaking left-handed layups, and knocked down 8-of-10 free throws in the victory.

Sophomore center Anna Belle Wakeland surged during a more relaxed second half to supply her squad with 18 points and nine blocks.

She opened the contest with a 17-foot jumper along the left baseline. The Lady Eagles would not find points again until her bank shot on an inbounds play with 4:38 left in the third quarter.

MARBLE HILL, Mo. – The Fredericktown girls were hampered by turnovers and errant shooting while falling 34-23 to host Woodland on Wednesday night.

Emma Brown netted 16 points for the Cardinals, who increased a 15-13 halftime to 24-17 after three quarters of the low-scoring contest.

Fredericktown (2-7) briefly pulled within one possession down the stretch, but converted only 1-of-8 free throws in defeat.

Kyndal Dodd and Linley Rehkop tallied six points each, and Shayna Russom added five for the Lady Blackcats, who were limited to eight combined points over the middle two quarters.

Potosi picked up opening-minute pins by Keki Ortiz, Aiden Martinez and Levi Courtney, plus a second-period victory by Draven Griffin.

North County salvaged a 42-24 win over Potosi behind falls by Wesley Duncan, Singleton and Boylan. Tanner Adamson earned a pin for Potosi at 120 pounds.

West County senior Grady Masters (22) embraces head coach Chris LaBruyere as teammates stand while heading to the bench in the fourth quarter against Valley on Wednesday night in Leadwood.