As St. Louis Cardinals legendary player Albert Pujols career comes to an end, take a look back at some of his most memorable moments.

In addition to a few stops to receive honors for a career chocked with achievements not seen on a ballfield or beyond outfield walls in generations, Albert Pujols has mapped out a retirement plan that includes travel and sightseeing some of the world he’s missed during 22 years in Major League Baseball.

He said he won’t leave the game behind, but what route he takes, what destination he seeks for a second act in baseball is still ahead.

A future colleague with the Los Angeles Angels has an idea where baseball will take him.

“I think the sky’s the limit for the guy,” said Angels general manager Perry Minasian when talking to the Post-Dispatch at recent industry meetings in Las Vegas. “I think he can do whatever he wants as far as if he wanted to take the path of managing a club, I think he could do it. And he’d be really good at it. If he wanted to work in the front office and run a club someday, I think he could do that. He’s that type of guy.

“Whatever he puts his mind to he will accomplish.”

Pujols, who officially retired in October, will soon begin a contract that is the last of its type in Major League Baseball — a 10-year personal services agreement with the Angels that pays him $1 million annually. The decade-long agreement was a sweetener on the 10-year, $240 million deal signed in December 2011 that took him from World Series champion with the Cardinals to free-agent blockbuster with the Angels. Pujols was guaranteed access to the services contract at the end of the playing contract or his retirement, regardless of where he played after the Angels.

The players’ union and MLB agreed in 2012 to ban personal service contracts in part because of the confusion they create if the player gets traded or does not finish his career in that same jersey.

Reunited with the Cardinals for a jubilant 2022 season, Pujols proved he could go home again — and again and again on his way to 700 career home runs and rise to second all-time in career RBIs and total bases. Throughout the summer, Pujols said he would “honor” the agreement with the Angels, and he reiterated that this past weekend in St. Louis. Specific responsibilities for his role will be decided later, but the rare deal invites those questions about what it means for the Cardinals’ reignited relationship with Pujols. He will be eligible for the fans to vote him into the Cardinals’ Hall of Fame in 2026, his induction into the National Baseball Hall of Fame is likely to follow in July 2028, and somewhere in that timeframe Pujols’ No. 5 is expected to be retired by the Cardinals.

“There is nothing (in the contract) that prohibits … him being honored by the Cardinals” or participating in those events, said a source with knowledge of the contract’s language.

A spokesperson for the Angels, when asked by the Post-Dispatch about Pujols’ participation as honoree or member of the Cardinals Hall of Fame, contacted team executives for clarity and replied: “Regarding the Cardinals’ Hall of Fame activities, it is something we would certainly discuss with both Albert and the Cardinals organization.”

The Los Angeles Times described how the agreement “essentially gives the Angels exclusive rights to Pujols during the first 10 years of his retirement.” The club president, John Carpino, told the newspaper that Pujols will work with players at the team’s academy in the Dominican Republic and be present as a coach or mentor during spring training.

“He’ll be like a team ambassador,” Carpino recently told the Times.

Asked by a reporter if the contract would keep Pujols from participating in similar ways with the Cardinals — spring training appearances or advisory roles, for example — Caprino said, “Possibly.”

Cardinals Hall of Famer Chris Carpenter participated in this past summer’s 2022 induction ceremony and on-field events while an employee of the Angels. Carpenter was hired by the Angels as a pitching consultant before the 2022 season. Before his recent turn as Chicago White Sox manager, Hall of Famer Tony La Russa was hired by the Angels as a front office adviser a few months before his expected appearance at Cardinals’ opening day 2020 festivities, which were canceled by the pandemic.

Cardinals icon Ozzie Smith’s contract with the Cardinals included a personal services pact after retirement that expired in 2006, and while he was rarely around the ballpark during that time, he did do events as a team ambassador.

At the end of his career, Nolan Ryan had a 10-year personal services contract with the Texas Rangers that overlapped with his induction into the Hall of Fame — his plaque sports a Rangers cap — and number retirements with three teams. The Rangers retired No. 34 in September 1996, two weeks before the Astros did the same. The Angels already retired Ryan’s No. 30 in June 1992, and then he pitched eight innings against them for the Rangers.

An Angels official said he’s seen players return to teams for honors, reunions, and other events and doesn’t “see why that would be any different” for Pujols.

Minasian acknowledged the connection Pujols has with the Cardinals.

“Very happy for him for what he was able to accomplish this year, and it was a special year for him,” the general manager said. “He’s a special guy. Love to have him in the organization. He’s going to be a good asset.”

Before negotiations with Pujols on an extension ended in 2011, the Cardinals explored whether they could offer him an ownership stake as part of the deal. The rule forbidding that had some elasticity and an MLB official, speaking on the condition of anonymity, told the Post-Dispatch that such creative options could be explored “if there’s an opportunity for a club to sign or keep a player” of Pujols’ magnitude. Personal service contracts fit that creativity, as did the milestone bonuses that Alex Rodriguez had with the Yankees and Pujols received from the Angels. For reaching 3,000 hits, Pujols’ contract included a $3 million bonus, and if he had reached 763 home runs, he would have received $7 million. Those bonuses were described as “marketing” agreements — and also were eliminated after Pujols’ deal.

“It gets tricky if the team attaches a condition that says the player gets the money if he shakes 500 hands a week, plays golf with 11 sponsors and spends a month in spring training,” wrote Hall of Fame baseball writer Jayson Stark for ESPN.com. “And if he gets traded, then what?”

After signing with the Angels, Pujols made specific mention of the 10-year personal services contract as a major part of the appeal. He described how Angels owner Arte Moreno “made me feel like he wanted me to be with the Angels forever.”

Forever took a pause in 2021 when the Angels released Pujols in May. After a revitalizing stint with the Dodgers, Pujols signed a one-year deal with his first team, the team that drafted him in the 13th round in 1999. He announced his intentions to retire at season’s end and then had a second half for the ages, finishing the year as the fourth player in history with at least 700 homers — he hit 703 — and second only to Hank Aaron in total bases (6,211) and RBIs (2,218). Pujols spoke with his teammates about the “joy” he had returning to St. Louis, what it meant to finish his career by restoring his bond with the team, with the city.

This past Saturday in St. Louis, at the Stan Musial Awards, he received the event’s highest honor, the Stan Musial Lifetime Achievement Award for Sportsmanship. His foundation, a major reason he won the honor, remains active in St. Louis. Pujols may join MLB for the Cardinals’ games in London, and he has other events with deep roots in St. Louis that will bring him back. On stage, he told the crowd they’ll see him “around Busch Stadium.”

For the next 10 years, pending any change to his contract, Pujols will blend being an Angels’ employee and a Cardinals’ great, working with LA’s executives for how best to be both.

His retirement, like his legacy, has wingspan to be an Angel and a Cardinal.

“I think anybody in this position would love to have a guy like him, whether he’s right next to you or you can pick up the phone and call him and ask him questions,” Minasian said. “You’d be crazy not to. I think he will do great things — whatever he chooses to do.”

On and off the field, Cardinals’ 1999 class saw the beginning of Albert Pujols’ legacy

As St. Louis Cardinals legendary player Albert Pujols career comes to an end, take a look back at some of his most memorable moments. 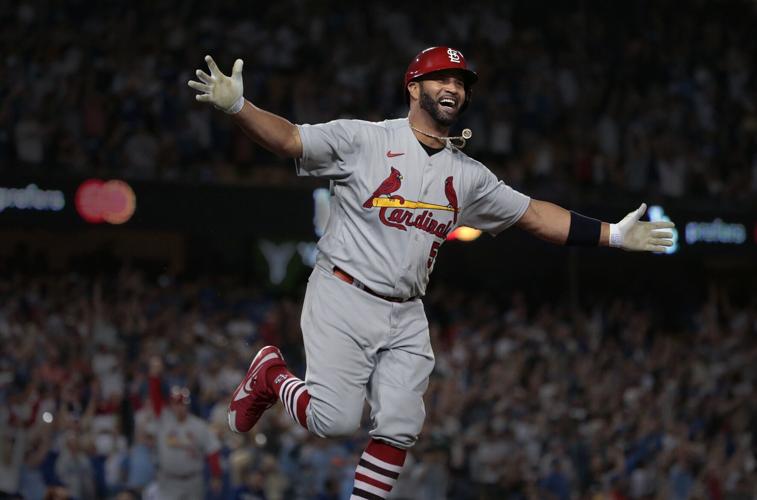 The Cardinals' Albert Pujols hits home run No. 700 in the fourth inning against the Los Angeles Dodgers on Friday, Sept. 23, 2022 at Dodger Stadium. 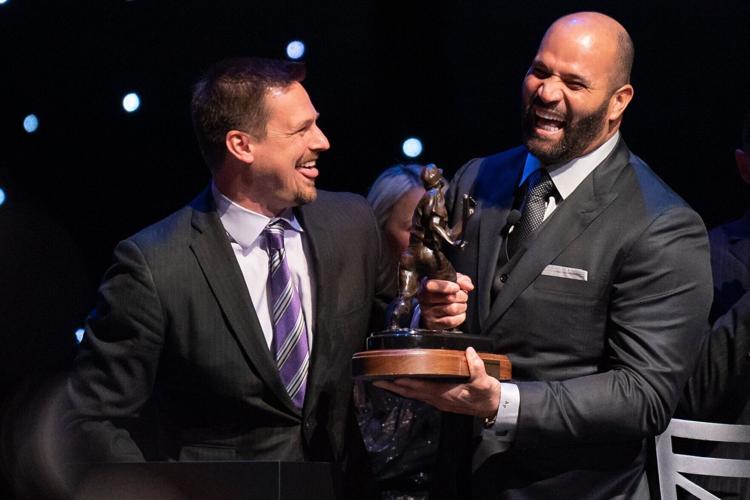 Albert Pujols, right, laughs as he is awarded the 2022 Stan Musial Lifetime Achievement Award for Sportsmanship during the Musial Awards on Saturday, Nov. 19, 2022, inside the Stifel Theatre.